There are many threats to global food supplies. Explain the problem, identify possible solutions and assess the effectiveness of these solutions.

In recent years, food security has become one of the most thorniest problems that the world faces.The population explosion and climate change had caused by food security. The essay will show that threats to global food supplies are on people’s health and ecosystems. It is also argued that managing crop productions and matching demand for food may have a beneficial effect on food security, while they also have some disadvantages.

The main threats of global food supplies are people’s health and ecosystems. Firstly, according to John Slaght(2012), approximately 3 billion people in less-developed countries are faced with insufficient food and nutrition. In contrast, about 2 billion people in economically countries are overweight. As a result of this unbalance distribution of the food, it is likely for the people of the latter to feel the most impact. Secondly, it is clearly seen drastic declines in bird species.

Populations of ‘ specialist ’ bird species have fallen to 30% in 40 years in Europe and North America(Slaght,2012). For example, it is possible for birds to ingest the drug from other animals’ carcasses. In addition, it might cause the spread of human diseases. It is said that vultures had spread diseases that affect humans in India(Swan rt al., 2006). Thus, physical condition and ecosystems can be seen as the two main threats to global food supplies.

In addition,Slaght(2012) had claimed that the country which has temperate climate can manage crop production to boost yields of some crops.

However, it has two negative effects. Primarily, climate change could put crops out of rhythm with the insects that pollinate them. Next, extreme weather events could damage the developing flowers which are fundamental to the crops. Slaght(2012) pointed out that animal sources of protein could be depended, so long as farmers take action to adopt practices and then potential yield will be fulfilled in the future. Overall, systemic approach to the problems of food security should be developed.

On the other hand, produce, store, process, distribute and access food in another way could be a positive way to match the fast changing needs for food. Godfrag et al(2010) had showed that, the number of poor people are no longer hungry. By this way, environmentally and socially will sustainable. Nevertheless some problems have been created. One of the most serious problems is the finite resources. With the growing population, the demand for food become huge, while the resources are restricted that provided by the Earth’s land, oceans and atmosphere(Conway, 1997). In brief, research should find some methods to solve the resources problem to feed 9 billion people.

To conclude, food security has caused starvation, malnutrition, health and welfare problems. People in developed countries are overweight, while less- developed countries’ people don not have adequate food. To avoid majors problems in the future, research should find the solutions which are managing crop productions and meeting the need for food. Although there are two solutions to solve the problems, research should deal with the disadvantages if they want to fulfill one day. 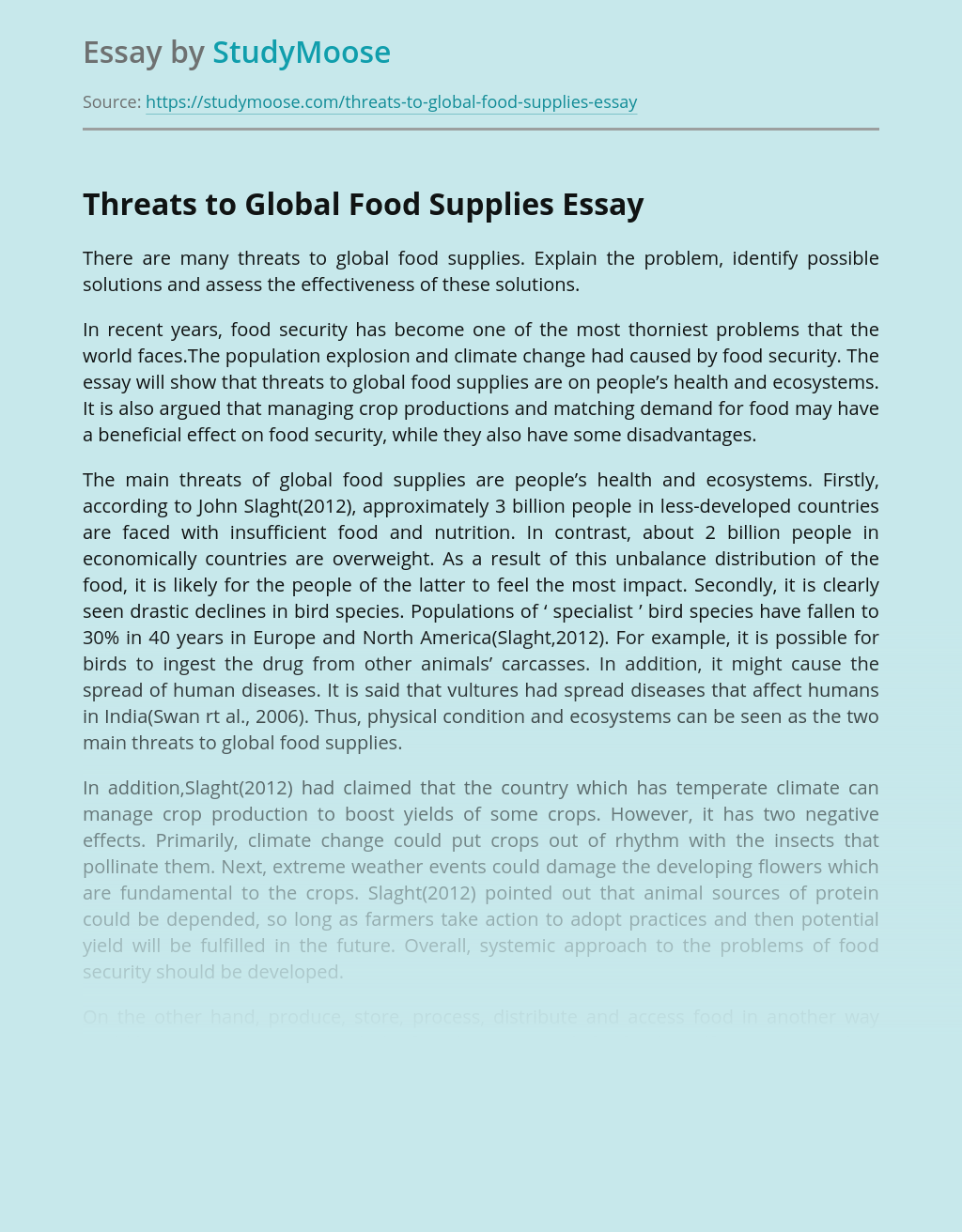