Don't use plagiarized sources. Get your custom essay on
“ Things Fall Apart Essay on Traditions and Beliefs ”
Get custom paper
NEW! smart matching with writer

The traditions and beliefs decide the fate of everyone in the village based on the citizens’ actions towards others, the earth and their ancestors. They throw twins into the evil forest for fear they are a bad omen “…when they heard the voice of an infant crying in the thick forest. A sudden hush had fallen over the women, who had been talking, and they quickened their steps.

Nwoye had heard that twins were put in earthenware pots and thrown away into the forest, but he had never come across them.”(pg 61-62).

They have a week of peace to celebrate the god of the earth to help their crops grow during which the peace is not to be broken or the earth shall not give the village a good harvest and most of the crops will die “No work was done during the week of peace. People called on their neighbours and drank palm-wine.

”(p.31). The citizens of the villages also build shrines for their ancestors to allow them to worship their forefathers and gods. All of these actions regarding their traditions and beliefs play a large part in their general way of life.

Some of the beliefs practiced in this culture would certainly be frowned upon in our society yet are perfectly acceptable in their culture. For instance, the idea that a child should be murdered “As the man who had cleared his throat drew up and raised his machete, Okonkwo looked away. He heard the blow. The pot fell and broke in the sand. He heard Ikemefuna cry ‘my father, they have killed me!’ as he ran towards him. Dazed with fear, Okonkwo drew his machete and cut him down.” (p.61). There is also their thought that twins should be dumped in the evil forest “…when they heard the voice of an infant crying in the thick forest.

A sudden hush had fallen over the women, who had been talking, and they quickened their steps. Nwoye had heard that twins were put in earthenware pots and thrown away into the forest, but he had never come across them.”(pg 61-62). They also believe that the spirits of the dead must be appeased with gifts of palm wine and food or they will bring bad fortune to the family “Near the barn was a small house, the ‘medicine house’ or shrine where Okonkwo kept the wooden symbols of his personal god and of his ancestral spirits. He worshipped them with sacrifices of kola nut, food and palm-wine, and offered prayers to them on behalf of himself, his three wives and eight children.” (p.14). Although these may seem to be things that a lot of people find horrid or unacceptable it is a part of their beliefs and therefore acceptable in their society.

Furthermore, these beliefs changed after the whites and colonialism came. The whites came and since they were unwelcomed when they asked for land the village gave them a portion of the evil forest “’they want a piece of land to build their shrine,’ said Uchendu to his peers when they consulted among themselves. ‘We shall give them land.’ He paused, and there was a small murmur of surprise and disagreement. ‘Let us give them a portion of the Evil Forest. They boast about victory over death. Let us give them a real battlefield in which to show their victory.’ They laughed and agreed” (p.149) “They offered them as much of the Evil forest as they cared to take.” (p.149). Everyone in the village thought they would be dead soon yet they live “The inhabitants of Mbanta expected them all to be dead within four days.

The first day passed and the second and the third and fourth, and none of them had died. Everyone was puzzled.”(p.149). This makes a lot of people in the village question the traditions and beliefs, wonder if maybe they should join the whites in their church, because of the thought that the whites god seems to be stronger than theirs and more accepting. Soon anyone who had been outcast join the whites, with nowhere else to go they had nothing to lose (quote chapter 18). The whites also took in a woman who had given birth to 4 pairs of twins “Nneka had had four previous pregnancies and childbirths. But each time she had borne twins, and they had been immediately thrown away.

Her husband and his family were already becoming highly critical of such a woman and were not unduly perturbed when they found she had fled to join the Christians.” (p.151) the villagers had thought for sure after doing all this, the white men would be killed but instead they continued with their lives as though nothing had happened. These beliefs were a large part of their society and normal life and now the whites are causing them to question whether those gods are really there or able to protect them as well as the white man’s god possibly could, but they still try to hang onto their beliefs as much as they can and discourage their children and friends from joining the white men.

It can thus be proven that a majority of the book revolves around the beliefs and traditions in their culture. When the whites came into town they started questioning their beliefs and traditions but before that they were fine with worshiping their ancestors and doing what their forefathers had taught them to do; respect the gods and the earth, grow their crops and have a family. 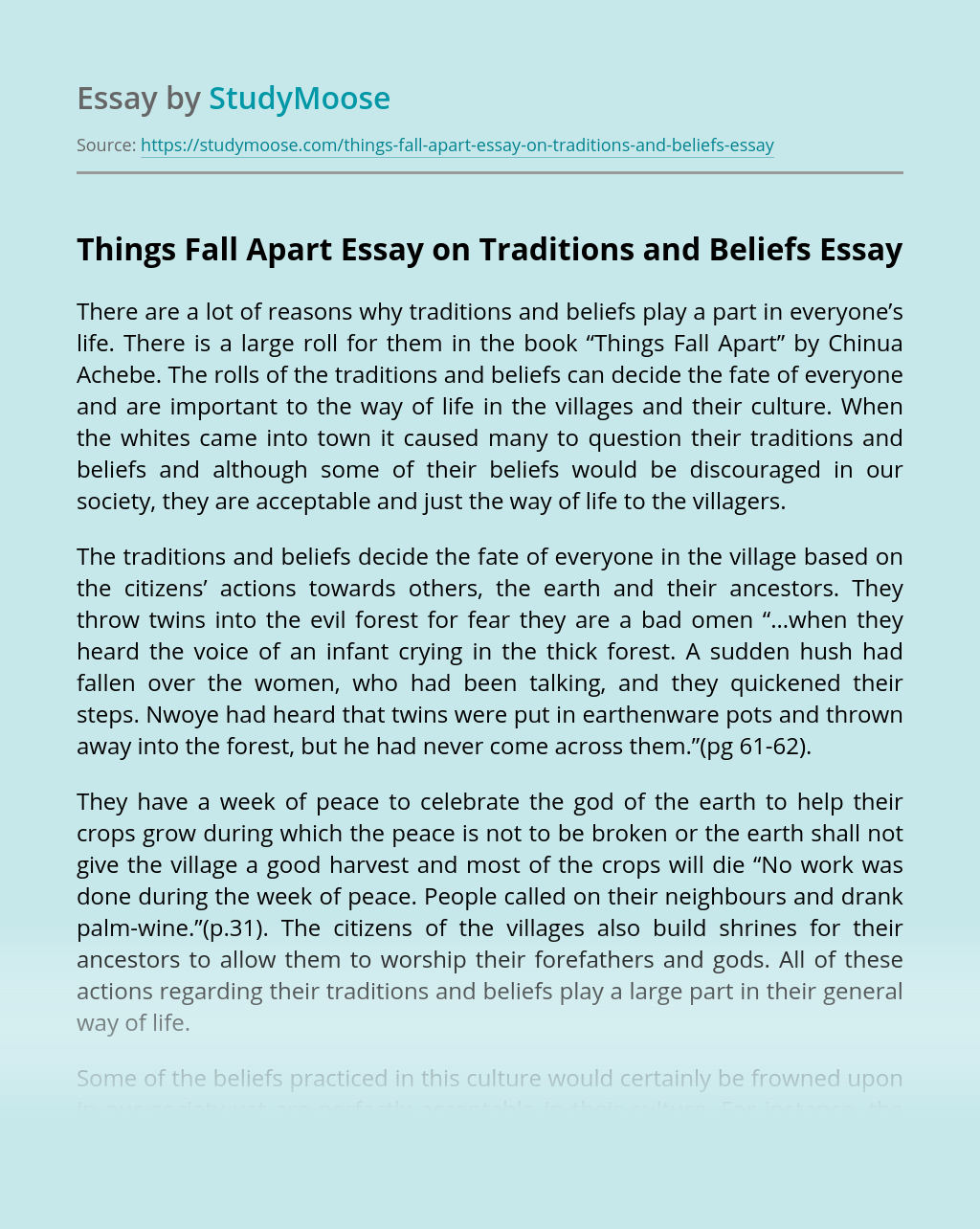