Times when we are powerless to prevent injustice, but never a time when we fail to protest

Prompt: “There may be times when we are powerless to prevent injustice, but there must never be a time when we fail to protest”

Justice can be seen from numerous amounts of perspectives where it is due to the upbringing of the person or due to their cultural beliefs, however they are all guided by the principal of fairness. Sadly though, sometimes we may be powerless to prevent injustice from occurring, as we are not always in the position where we are able to do something.

Don't use plagiarized sources. Get your custom essay on
“ Times when we are powerless to prevent injustice, but never a time when we fail to protest ”
Get custom paper
NEW! smart matching with writer

This however should not mean we lose all hope, there must never be a time when we fail to protest as justice is important. Without justice we would have no fairness, no equality, no honesty. It was once said by Martin Luther King; “injustice anywhere is a threat to justice everywhere”. We should not let justice go on unannounced and unheard of, we must always protest against something of which we believe is wrong.

One example of this is Martin Luther King and his quest for blacks rights.

Martin Luther King was the leader of the African-American Civil Rights Movement in the United States aiming to eradicate racial discrimination against the black Americans. The black Americans were unfairly treated by the white Americans, not being allowed to use the same bathrooms, the same buses, sit in the same restaurants and many were slaves and servants for the whites. Yet, even though black Americans were usually disregarded and mistreated – usually put in jail for speaking up or confronting a white American, King was not afraid to speak up.

King had once said “Human progress is neither automatic nor inevitable… Every step toward the goal of justice requires sacrifice, suffering, and struggle; the tireless exertions and passionate concern of dedicated individuals”, he was willing to sacrifice his life for the younger generations to come. He was willing to protest against the injustice occurring to his own race in hope of equality in the future. Rose Parks also was another black American who refused to give up her seat on a public bus for a white passenger and was then arrested. This caused an outrage of black Americans to join together and fight for their rights, protest against the injustice that had been going on for many years before them. The Civil Right Movement went for many years, changes could not be seen at first and many black American’s lives were taken.

However, they did not give up, they could see the importance of justice to their race and continued to fight. As a consequence, the black Americans are now theoretically equal to the white Americans, being able to have equal rights in voting, using transport, eating in restaurants, and getting paid the same amount; however this would never have been possible if someone hadn’t of spoken up, if everyone had of kept silent about the injustice that had been going on.

The prompt is also linked to many scenes in The Kite Runner, the first being Hassan getting raped. When Amir watched Hassan being sexual assaulted he was not in the position where he could do much about it; he wasn’t strong enough to fight off Assef and he couldn’t call for help as there was no one around. However, Amir could never forget it, his guilty consciousness continuously reminded him of how Hassan had always stuck up for him, but Amir didn’t have the strength. Amir continued to remain silent, eventually causing Hassan to leave being unable to deal with the pain anymore. Amir should have fought to have Hassan stay, he should have told someone what had happened to him, he should have looked after Hassan when they arrived back home, expect Amir had done nothing. He let the injustice go unannounced, inflict more pain on Hassan and is just as much to blame as Assef for Hassan’s misery. Another example within the book is when Baba confronts a solider requesting to have “time” with an Afghan woman outside the truck. Baba dares the solider to shoot him, in order to protect this woman’s life. If Baba hadn’t spoken up for this woman she would have been raped and tortured to the brink of death. Baba had saved this woman’s life purely because he was not afraid to protest against the unjust situation.

The affects of injustice can create many consequences, but if someone doesn’t speak up the consequences are higher and the situation is more likely to keep happening or happen again. As you can see, we are able to influence a situation and create change, however consequences can be very different based on the fact where it goes unheard of or someone protests. If we compare the two situations above where Martin Luther King sticks up for the black community against the white Americans and Amir watching Hassan get raped we can see how a situation can dwindle when one does not speak up, yet we can also see the complete opposite where one man can change the world just by one single protest to form a group of protesters, then a world of protesters and make a difference.

In conclusion, we must always stand up for what we believe in, there must never be a situation of which we believe is wrong go unheard of. We may not be able to prevent the injustice from occurring but we could at least try to prevent it from continuing or happening again. As Mohandas Gandhi had once said “you may think your actions are meaningless and that they won’t help, but that is no excuse, you must still act”. For if Hassan had of spoken up for Hassan, given him some comfort, Hassan could still be alive. If Baba hadn’t of spoken up to the solider for the female, her life could have been taken. Our actions can make a difference, we need to be determined to always speak up, the hero is not always the person who steps in, but the person who protests. Therefore if we are unable to prevent injustice, we need to speak up, one small voice protesting can be heard.

Times when we are powerless to prevent injustice, but never a time when we fail to protest. (2016, Mar 09). Retrieved from https://studymoose.com/there-may-be-times-when-we-are-powerless-to-prevent-injustice-but-there-must-never-be-a-time-when-we-fail-to-protest-essay 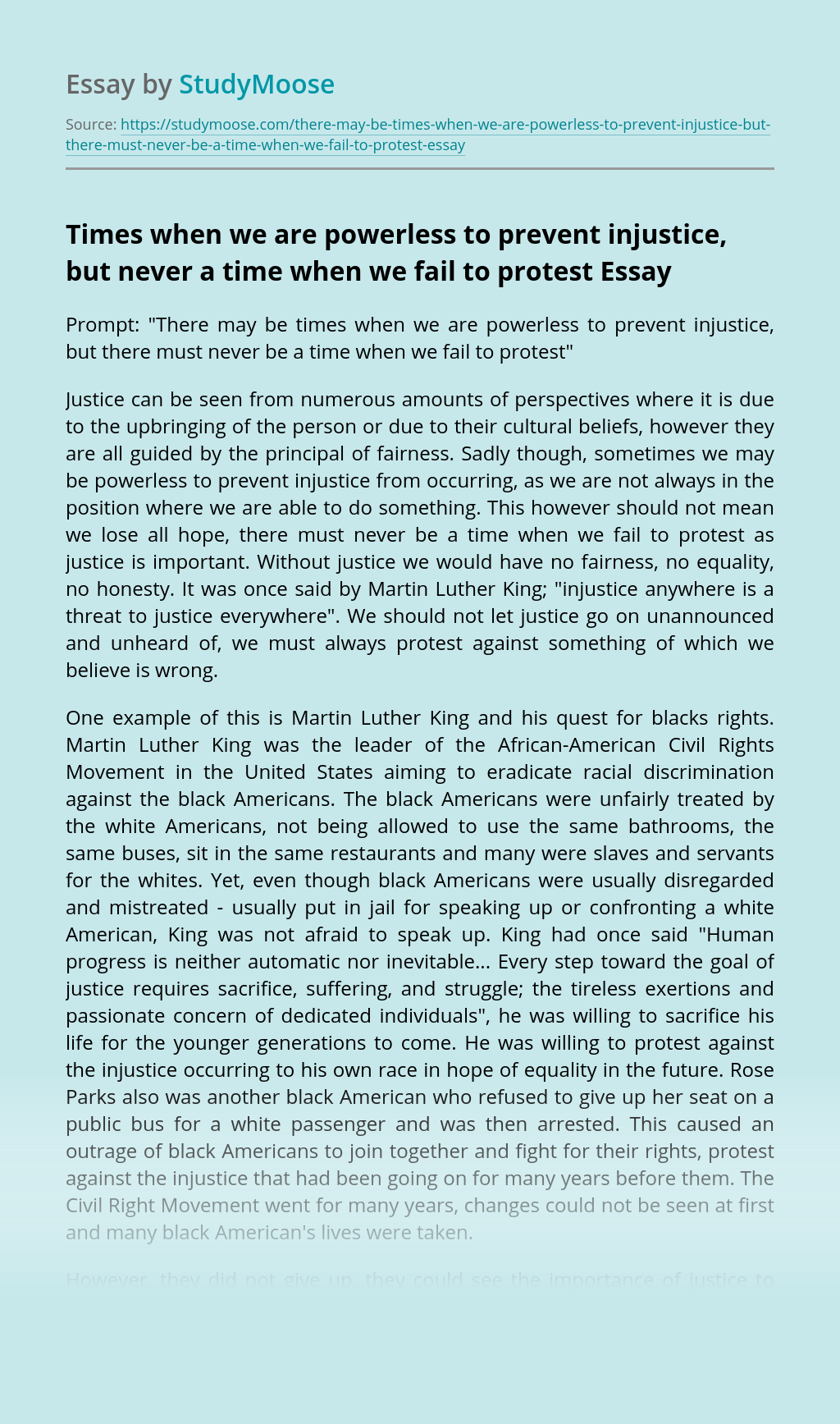