In positioning this literature review to provide some context, there is a useful framework which states “all theories of organisations are based upon a philosophy of science and a theory of society” (Burrell & Morgan, 1979, p. 1). They then categorise this into four sets of assumptions related to ontology, epistemology, human nature and methodology. Of the first two, ontology is the philosophical study of what is fundamentally real, whilst epistemology is more about how we understand things and then communicate this as knowledge to others.

Don't use plagiarized sources. Get your custom essay on
“ Theories, Concepts, and Tools Associated With Leadership ”
Get custom paper
NEW! smart matching with writer

Epistemology may be further categorised as either anti-positivism or positivism. While anti-positivism may manifest itself in many different ways, its adherents believe that the social world can only be understood by those who are directly involved. Positivism however, attempts to explain the social world through established patterns and understanding cause and effect; or as seen through the eyes of an observer. This literature review has therefore required a life-time’s experience to be parked in order that the area of focus is viewed through a positivist lens.

In addition to the literature review, the framework has direct relevance to the research methodology proposed and further discussion on the topic is therefore included in chapter 7 of the report.

There is a plethora of theories, concepts, and tools associated with leadership, and over the years, a number of attempts have been made to categorise them for simplicity. Many of these however, would appear to have been for the purpose of commercial activities (personal development programmes) or are the result of sub-doctoral scholarly endeavours; meaning the outcomes represent a normative/prescriptive perspective rather than forming part of any theoretical spectrum.

Most summaries include the “great man” theory, theories based on traits, skills, behaviours, or the situation, others based on variables to better suit a leader’s style, interaction with followers (transaction versus transformational leadership); and then there are those that reflect more contemporary thinking on the topic, basically exploring leadership through different perspectives; recognising that there is no single theory that accounts for all circumstances. Often, the various approaches used, depend on which particular frame of reference is used to create the categories. Grint (2010) illustrates this by constructing several different frameworks to better understand how leadership theory/concepts have evolved over time; including,

These have been included at Appendix A.

Notwithstanding this, the literature was synthesised in order to summarise the major theories/concepts in chronological order across the domains of leadership, management, and command; and then (colour) linked based on consistency of approach or where elements of a previous theory had been adapted/evolved (Appendix B).

While this proved an interesting exercise, it didn’t necessarily advance the primary area of interest – leadership in extreme contexts. As a result, the theoretical approaches, based on the contents of those leadership articles primarily associated with extreme contexts were again analysed, highlighting those theories/concepts (in red) where there appeared to be direct relevancy to the proposed area of research (either from a point of leadership but in some cases from the perspective of followership). The outcome suggested that no single theory or group of theories solely provide the definitive leadership approach to addressing extreme contexts. This conclusion has been supported by considerable research, as follows:

” There is little consensus in the literature about the most effective leadership style with respect to followers’ performance in extreme contexts, dangerous contexts, or under high environmental risks, and specifically for in situ extreme events (Antonakis et al., 2003; Bass & Riggio, 2006; Hannah et al., 2009; Hollander & Offermann, 1990; Weick, 1993; Yukl & Fleet, 1982). Hannah et al.’s (2009) theoretical article had the goal of building a conceptual framework for studying leadership in extreme contexts and their works noted the uncertainty regarding the most effective leadership style in extreme contexts. They describe research showing in combat, for example, leaders build closer relationships with their soldiers and this behavior (sic) may be perceived as transformational leadership by followers. Contrarily, Antonakis et al. (2003) and Bass and Riggio (2006) stated that in situations where safety is of paramount importance and the presence of high environmental risks exist, active management by exception (i.e., transactional leadership) may be required. There are thus countering accounts in the literature as to the relative effectiveness of leadership styles in extreme events” (Geier, 2016, p. 234).

Notwithstanding an apparent lack of any strong linkage with general leadership theory, the literature highlights several leadership concepts/tools that may help explain the factors at play in extreme contexts. These have been categorised by theme and intent, as follows:

Over the years, many scholars have examined the relationship between leaders and managers; Zaleznik (2004) and Kotter (1990) being two of the more prominent. Bungay (2011), takes this a step further by complementing the two roles with a third, command. While he draws heavily on the military by way of example, he claims a relevancy for business, equating command with the more generic directing function, as shown in the diagrams below:

Developing this further and drawing on the concepts contained in action-centred leadership (Adair, 1980), Bungay has also created a model (comprising sub-elements for all three components of the executive’s trinity) as follows:

This model highlights the complementary nature of the sub-elements and helps reinforce the notion that for completeness, all three elements of the trinity are required, working in harmony.

Grint (2008) uses a similar framework when outlining his approach to addressing problems; categorising these as either wicked, tame or critical in nature; in turn building on a piece of research conducted by Rittel and Webber (1973). Grint (2008) proposes that the individual elements of the trinity are respectively best suited for addressing respective problem types as indicated in the next diagram:

Using this framework, he proposes a flexible approach to problem solving depending on its nature, with a command response to critical problems (where there is little time for decision-making and action), management to tame problems (those issues likely to have occurred before), with leadership best suited to addressing wicked problems (those of a more complex nature where there is no clear relationship between cause and effect, and are linked to contextual factors). Grint (2008) goes on to state that wicked problems require the transfer of authority from individual to the collective (turning the problem around for those affected to solve). He does this by drawing on the ideas of Douglas (1993) who captured culture on the basis of a two by two matrix; with the criteria being Grid (structure: rules and roles) and Group (affiliation).

Grint (2008, 2010) orientates these ideas to the challenge at hand to suggest that only multi-faceted (or “clumsy”) solutions are capable of addressing wicked problems. Using global warming as an example, he proposes that any successful solution would need to address the needs of people in all four quadrants – hierarchists, fatalists, individualists, and those in the egalitarianism quadrant; as follows:

Matrix of Structure and Group Loyalty

Grint is a prolific writer who is very readable and there is certain logic to his argument. As an experienced practitioner, I am inclined to support his approach, except he may have failed to grasp some of the nuances associated with exercising command. In his many writings on the subject, summarised in Grint (2010), he associates the role of command with providing answers, while he states leaders respond by asking questions. In reality, while critical problems demand decisive responses, good commanders tend to arrive at their decision by knowing what questions to ask. People therefore follow commanders not because they know all the answers, but because they trust them to make the best decision in support of the mission and the team.

CYNEFIN – strategy in the context of uncertainty

Contrast this to the CYNEFIN (Welsh word for habitat) framework (originally a practitioner developed decision making model produced by a team working at IBM) (Snowden, 2005). The CYNEFIN framework is designed to help leaders understand where they sit on a continuum of uncertainty in order to determine an appropriate response. Snowden’s framework has five domains, four as depicted in the diagram below with the fifth, labelled disorder (when people are unsure as to the quadrant that applies) located in the middle.

Snowden then goes onto describe the characteristics for each of the four key domains, the role of the leader in each, along with tendencies and means to overcome these, as follows:

Both Snowden’s (2005) CYNEFIN and Grint’s (2008) clumsy solutions for wicked problems have similarities, which they share with situational based leadership theories espoused by Hersey, Blanchard, and Johnson (2013), in Vroom and Yetton’s Normative Model (Vroom & Jaago, 2007), and House’s Path Goal theory (Evans, 1996). There are however, also subtle differences. Snowden (2005) has two categories (complex and chaos) that spans Grint’s (2008) wicked problem category, providing greater clarity and certainty in approach – there is a time to probe (ask questions) and a time to simply act, consistent with Grint’s (2008) critical problem strategy.

Post Normal Science represents a fresh approach to understanding issues in an complex, uncertain, high risk environment where urgent decision-making is required (Funtowicz & Ravetz, 1993). A simple way of depicting this is in their graph as follows:

More recently, a team (comprising Michael Tarrant and David Parsons) working under the auspices of the now defunct Australian Emergency Management Institute, adapted the concept for emergency managers, as follows:

Consistent with both Grint (2008) and Snowden (2005), the above diagram begins to explain the evolution/escalation of factors present when moving from a leadership/management (as usual) space to a requirement for leadership in extreme contexts. It also implies a time dimension, as much of what is necessary to support decision-making and response in all three categories, needs to be established pre-event (e.g. SOPs, response plans, networks and relationships etc.).

This notion of pushing the boundaries of knowledge and understanding is similar to the collaborative, iterative concept of Emergent Goal Achievement (EGA) used in mainstream organisational leadership to produce applied outcomes (Coffey, 2010), as well as Action Research designed to produce research outcomes. Action Research which has its origins in Lewin (1946), has since spawned a number of variant approaches, and is explained further in section 7.3.3.2.

As an observation, all these concepts (clumsy solutions to wicked problems, CYNEFIN, and the Tarrant/Parsons’s unpublished complexity graph) are in fact decision-making models/tools and this perhaps suggests that one of the key points of difference between leadership during business as usual and leadership in extreme contexts, is addressing the unknowns in a dynamic, complex and high stress environment. Follow-up to consider this in greater depth needs to feature as part of this proposed programme of research. 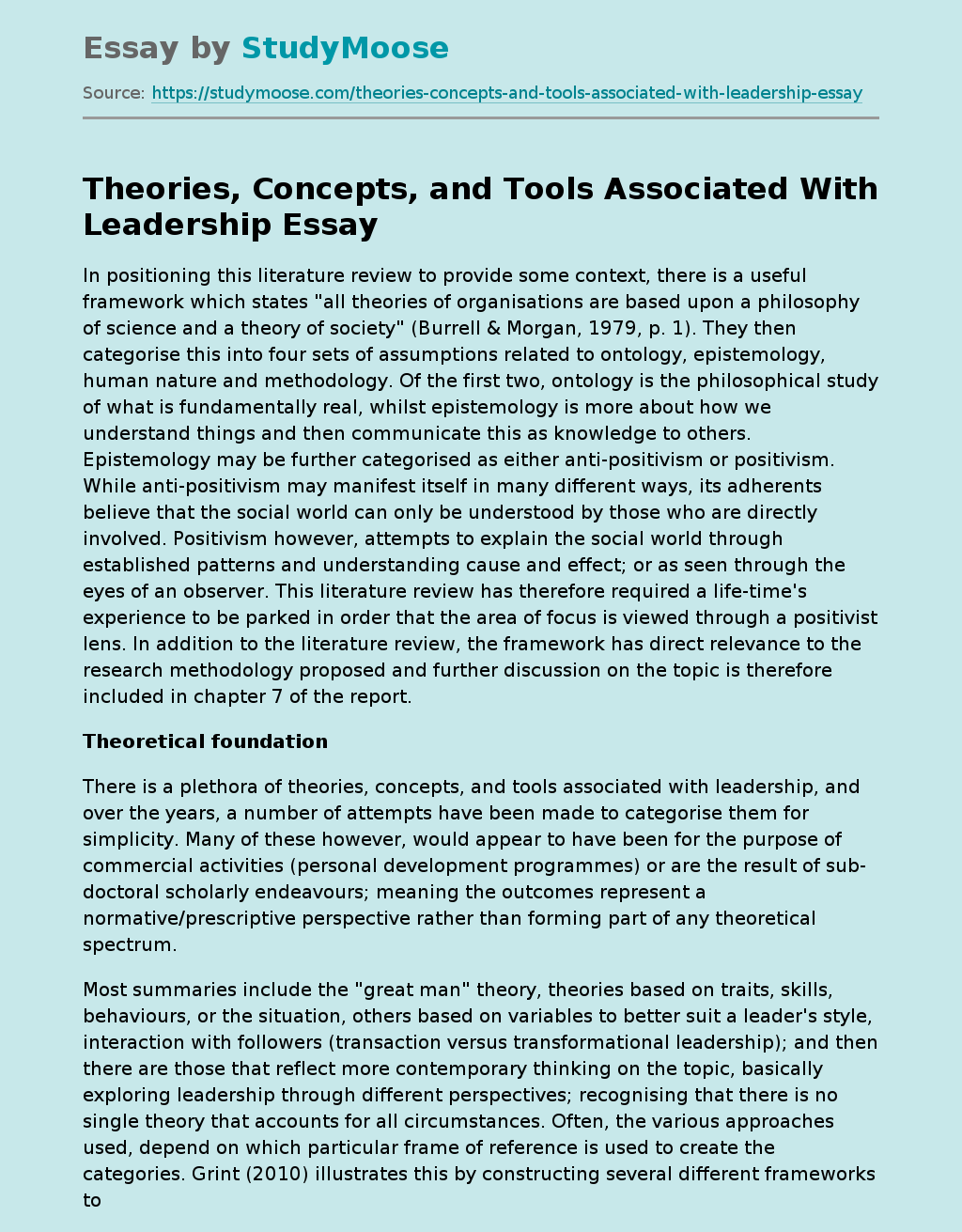