Themes in Alice in Wonderland

“I could tell you my adventures–beginning from this morning,’ said Alice a little timidly: ‘but it’s no use going back to yesterday, because I was a different person then.” In Alice’s Adventures in Wonderland by Lewis Carroll, there are many themes and ideas that this novel has influenced in todays society. Themes include finding your identity, growing up and curiosity.This novel has affected many things in the past, present and future.

One theme in this novel is finding your identity, Alice and Oliver are really good representations to the belief of the audience when it comes to the fact that they have to face extremely difficult situations that help in finding who they are and what they can do in their life.

Don't use plagiarized sources. Get your custom essay on
“ Themes in Alice in Wonderland ”
Get custom paper
NEW! smart matching with writer

One major conflict is deciding whether to choose adulthood or childhood, throughout the story Alice is sent on a magical and romantic journey to not only find who she is, but to search for logic in the world and to play the games that people play.

This was a difficult challenge for her because she was forced to grow and adapt in a rapid change of development and environment. “How puzzling all these changes are! I’m never sure what I’m going to be, from one minute to another” During this confusing time, Alice is faced with the many emotions of growing up including, confusion, discomfort, and frustration with herself. “it’s no use going back to yesterday, because I was a different person then,” Even though she has all these feelings towards the fact that she is in this situation, she still manages to continue to adapt and learns how to keep her feelings under control.

Wonderland has forced Alice to think of herself as a mature young lady, even though she was thrown into new situations where she had to face many responsibilities.

Another theme in this novel is growing up. One of Lewis Carroll’s biggest fears is of all of his childhood friends growing up into mature women. Throughout this novel, Carroll continuously stresses the conflict between Alice and her sense to grow up so fast. Even though we get a sense of reality in this novel, there is a major theme of growing up as it resembles the birth of a child when it travels from inside of the mothers comforting body to the outside world where its confronted with many difficult problems. That also applies to the story of Alice in Wonderland, she falls from the world of her caring parents into a world of adulthood and challenging problems that she is forced to overcome. “Alice had begun to think that very few things indeed were really impossible”.

During this novel, White Rabbit is challenging Alice by giving her complicated tasks, including going to his house and getting his things.“Would you tell me, please, which way I ought to go from here?’ ‘That depends a good deal on where you want to get to.’ ‘I don’t much care where –’ ‘Then it doesn’t matter which way you go.”Alice thinks of her adventures as a fairy tale and she can imagine herself writing stories when she finally grows up. During that moment she realizes that she has already grown up and her body will never age. The fact that White Rabbit is acting like her authority figure forces Alice to adapt to her idea that all humans are on the top of the animal hierarchy. She faces many obstacles including the Caucus race, Mad Hatter’s Riddles and understanding the Queen’s croquet game. During this difficult time, Alice has a hard time believing in herself and so she underestimates her capabilities and her self confidence is lowered.

Another major theme in this novel is curiosity and confused. There are many times in this novel when Alice has shown us the curious side of her. She meets many unusual people and animals and creatures that make her confused in her crazy adventure. In the beginning of the novel, Alice gets distracted easily by her boring work when she notices a white rabbit and chases him down a mysterious hole. Another instance when she shows us her curiosity is when she finds a bottle of liquid that is labeled “Drink me”, being the curious person she is, she drinks it to only find out that it makes her body shrink or grow. “I know something interesting is going to happen’ … ` I’ll just see what it does.”

Alice considers herself a little girl that is exploring the confusing world around her but yet she is an adult and forced to be mature in the world around her. She learns to cope with many different situations and people. “if you drink much from a bottle marked ‘poison,’ it is almost certain to disagree with you, sooner or later.” Alice has had to develop a sense of courage because if she didn’t then she would be lost out in the world. This novel represents the child’s struggle of trying to stay alive in this difficult world of many difficult adults and other people.That’s the reason they’re called lessons,’ the Gryphon remarked: ‘because they lessen from day to day.” Alice tries so hard to follow all of the rules that she isn’t used to because she was born into a world that never had rules so this is very different for her and she doesn’t know how to react to it.

In Alice’s Adventures in Wonderland by Lewis Carroll, there are many themes and ideas that this novel has influenced in todays society. Themes include finding your identity, growing up and curiosity.This novel has affected many things in the past, present and future. White Rabbit and Alice have showed us that even though the world around us is chaotic and even though there are many difficult challenges, you cannot give up. This novel has influenced today’s society because it has given us an insight on how we should think about life and how we should portray the people around us.

Themes in Alice in Wonderland. (2021, Dec 07). Retrieved from https://studymoose.com/themes-in-alice-in-wonderland-essay 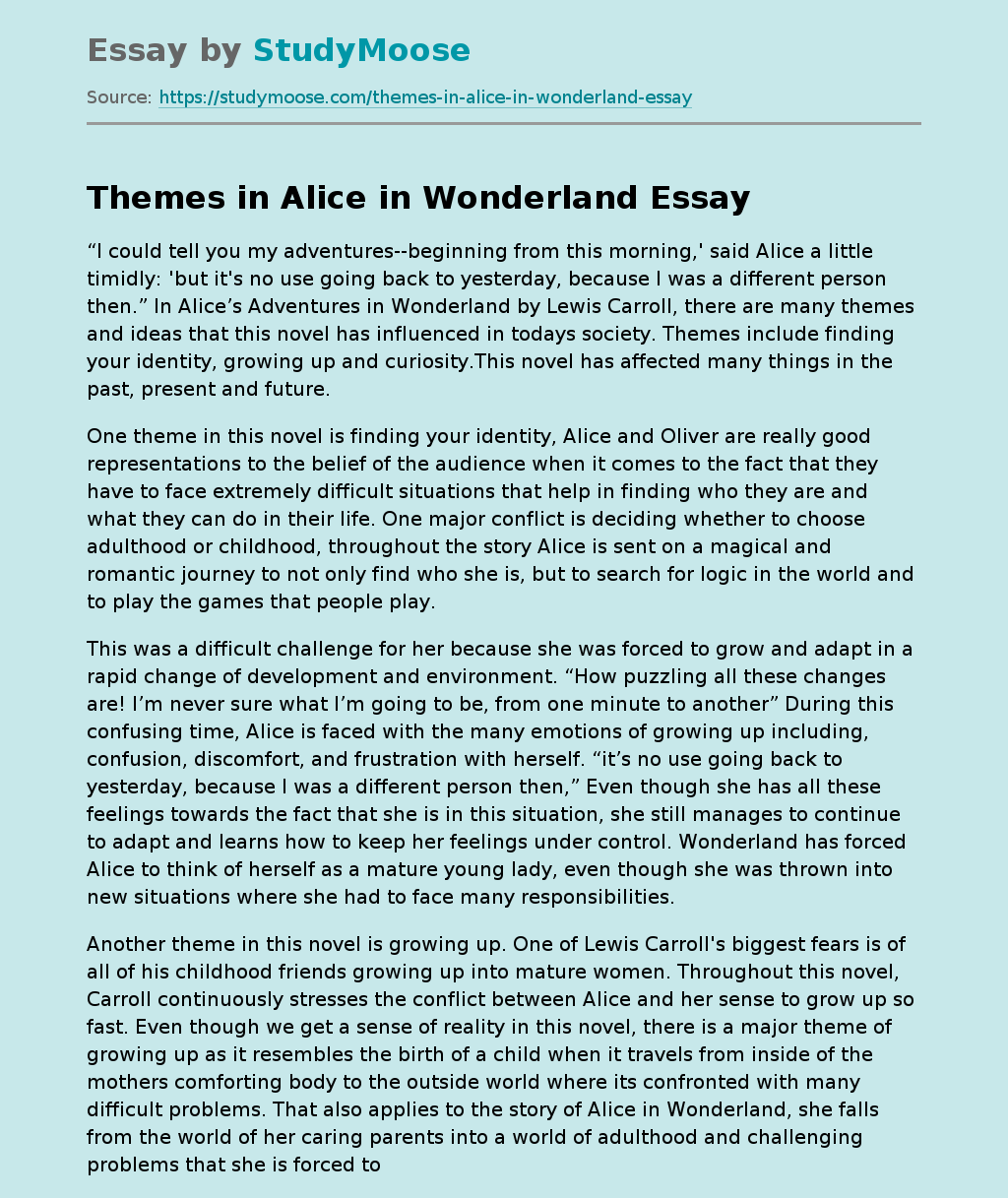