The Walt Disney Company and Pixar Inc.: To Acquire or Not to Acquire

1)The acquisition of Pixar would be beneficial to Disney due to how both companies’ businesses are related. This related acquisition would lead to the formation of more synergies and hence create value through the integration of their resources and capabilities. By acquiring some of Pixar’s core competencies and strengths, Disney may realise a new growth potential while reinforcing its strategic competitiveness.

Firstly, the acquisition would cause Disney’s market power to rise due to the increase of its resources and capabilities to compete in the industry and also a greater share in the market.

Don't use plagiarized sources. Get your custom essay on
“ The Walt Disney Company and Pixar Inc.: To Acquire or Not to Acquire ”
Get custom paper
NEW! smart matching with writer

This is of great importance due to the intense competitiveness in the industry that is dominated by only a few key players. Any increase in market power would be greatly advantageous.

Also, by acquiring Pixar, Disney would gain access to Pixar’s leading computer-generated (CG) animation technology at lower costs than if it were to develop similar technologies by itself. The acquisition of such technology provides more predictable returns than developing an internal product, which entails a great amount of risk.

In addition, Disney would reduce future costs by eliminating various fees to Pixar such as the participation fee. Besides, physical and technological resources, Disney would obtain Pixar’s human resources such as their highly talented and technical animators. Together with Disney’s superior distribution know-how, they will definitely be a force not to be reckoned with.

Another benefit of acquiring Pixar would be that Disney would have the rights over the use of its characters from the films, which would propel ticket and retails sales in both its theme parks and consumer product divisions respectively.

Furthermore, it can be expected that Pixar would generate new streams of revenue for Disney through the production of future “smash hits” due to its stellar track record.

As a board member, by procuring Pixar, bringing on Steve Jobs to the board may prove harmful. Due to his domineering personality, he could possibly influence or steer the direction of Disney as a whole. However, having him does bring its merits. It would be excellent to have Apple’s top executive and co-founder associated with Disney which would also bring about an expansion in reputational resources such as brand awareness, perceptions of quality and reliability and new creditable networks, which make stakeholders perceive Disney as superior in the marketplace. This would definitely be beneficial for Disney’s shareholders.

Nevertheless, Disney should exercise caution when considering the acquisition. There is the possibility of running into integration difficulties such as conflicting cultures. The two companies have very different cultures, which may hinder the post-merger integration. Pixar had a relatively smaller organization with an open culture compared to Disney, which was a huge corporation that followed a hierarchical management structure. It is possible that the cultural clash may lead to an exodus of creative talent from Pixar leading to failure of the acquisition. Moreover, there might be ambiguity regarding who would control Pixar. In the absence of coherent transformational leadership, the acquisition may end up destroying value instead.

Also, the acquisition may be too expensive for Disney. The price-to-earnings ratio of Pixar was 46, which was significantly higher than the industry average and Disney’s of 17. Therefore, the potential deal may cause high dilution of shareholder’s equity, which would pressure original stockholders to sell due to the decline in share price.

Disney’s traditional 2D animation movies have failed to deliver in recent times due to the introduction and advancements of CG animation technology. Since Disney’s efforts to initiate its own CG animation unit had been successful, Pixar’s acquisition can give Disney access to Pixar’s proprietary CG technology and its highly technical and creative workforce. Also, Disney’s existing co-production agreement with Pixar was to expire in 2006 and losing Pixar to its large media competitors would be a huge threat for Disney as it struggles to revive its animation business. Thus the acquisition of Pixar was necessary for its survival.

In addition, by having access to the Pixar brand and its characters, they would help to supplement Disney’s existing characters across its different businesses like theme parks, merchandise, and television, which provide more sales opportunities. Despite the dilution of Disney’s earnings per share, it is for the short-term. The acquisition fills a crucial strategic gap for Disney and can create long-term value for its shareholders. As such, Pixar is a “near perfect strategic fit” for Disney and hence should be acquired by Disney to remain competitive. 2)Pixar had a few alternatives besides being acquired by Disney. One alternative for Pixar was to vertically integrate forward and enable distribution of its own content instead of relying on Disney by acquiring smaller media companies. However, this would be a highly unrelated diversification for Pixar and possibly create diseconomies of scope. Pixar would also face rigorous competition from other media conglomerates like Disney, Universal and Paramount.

Pixar, being a leader in CG animations and having an exemplary track record of producing blockbuster hits, had a lot of potential suitors which include Warner Bros., AOL, Time Warner, Fox and Sony. Any media companies that strikes a deal with Pixar may instantly forefront the animation market. Thus we see that the competitive advantage of Pixar in the domain of CG animation gave them with multiple suitors to collaborate with. So another alternative was for Pixar to form a deal, similar to the one which Lucasfilm had with Twentieth Century Fox, with some other media conglomerate. Although this alternative is attractive for Pixar as they are in a commanding position, it would mean there would still be two different companies with two different group of shareholders and hence, two different visions. Also, this could possibly mean that Pixar would have to give up the rights to the characters and films they had made in partnership with Disney.

There are also benefits for Pixar from being acquired by Disney, which may outweigh the benefits from the aforementioned alternatives. The acquisition provides a competitive advantage as Pixar can market its content through Disney’s well- established distribution systems compared to other inferior distributors. The distribution costs of the films for Pixar would also be much lower than that of its competitors. This would allow Pixar to focus on its core strengths of producing its CG animation, without investing money, time and effort in distribution and production. In addition, Disney has the resources and capabilities to produce merchandise and sell in retail spaces or theme parks so Pixar could also gain from other lines of products such as toys, apparels and other memorabilia, which they originally had no market share of. One successful example of the above-stated leverage is the Pixar-Disney film, “Cars”. Though it was not considered a big blockbuster, the revenues in retail products reached about $5 billion for “Cars” only through sale of games, an ice-skating show and a “Cars”-themed world in their theme parks.

Moreover, acquisition by Disney would increase the price-to-earnings ratio of Pixar, which would be welcomed by the investors and shareholders alike. Pixar shareholders would receive

There were also constraints faced by Pixar, which could cause complications for them if they were to disengage with Disney. Pixar was still obligated to Disney to produce three films under its present arrangement and the hold over sequels of successful films made by Disney-Pixar would suffer as mentioned in the contractual agreement.

Both Disney and Pixar are two major players that have been standing the test of time in the animated film industry. Their synergy in the past has produced blockbuster hits in the box office and home video sales. Disney has plenty of capital and an existing expansive network of theme parks and distribution channels while Pixar has a huge and attractive talent base with proprietary CG animation technology. The combination of these two companies will be very difficult for competitors to imitate causing a less intense rivalry in the industry.

With the combination of Disney and Pixar, this would decrease the bargaining power of the buyer in the perspective of Pixar due to multitude of channels that Disney provides consumers with easy access to watch its films. Together, the threat of substitutes will be reduced. Substitutes such as other forms of entertainment may not match up to the appeal that Disney creates with its brand reputation for its existing established customer base.

Upon assessing the different alternatives, and using the essential tests: better-off test (the new unit must gain competitive advantage from its link with the cooperation or vice versa), the cost-of-entry test (the cost of entry must not capitalize all the future profits and the attractiveness test (the industries chosen for diversification must be structurally attractive or capable of being made attractive) it can be seen that being acquired by Disney passes all these tests and creates shareholder value for Pixar which would be in the best interest of Pixar’s shareholders.

The Walt Disney Company and Pixar Inc.: To Acquire or Not to Acquire. (2016, Apr 27). Retrieved from https://studymoose.com/the-walt-disney-company-and-pixar-inc-to-acquire-or-not-to-acquire-essay 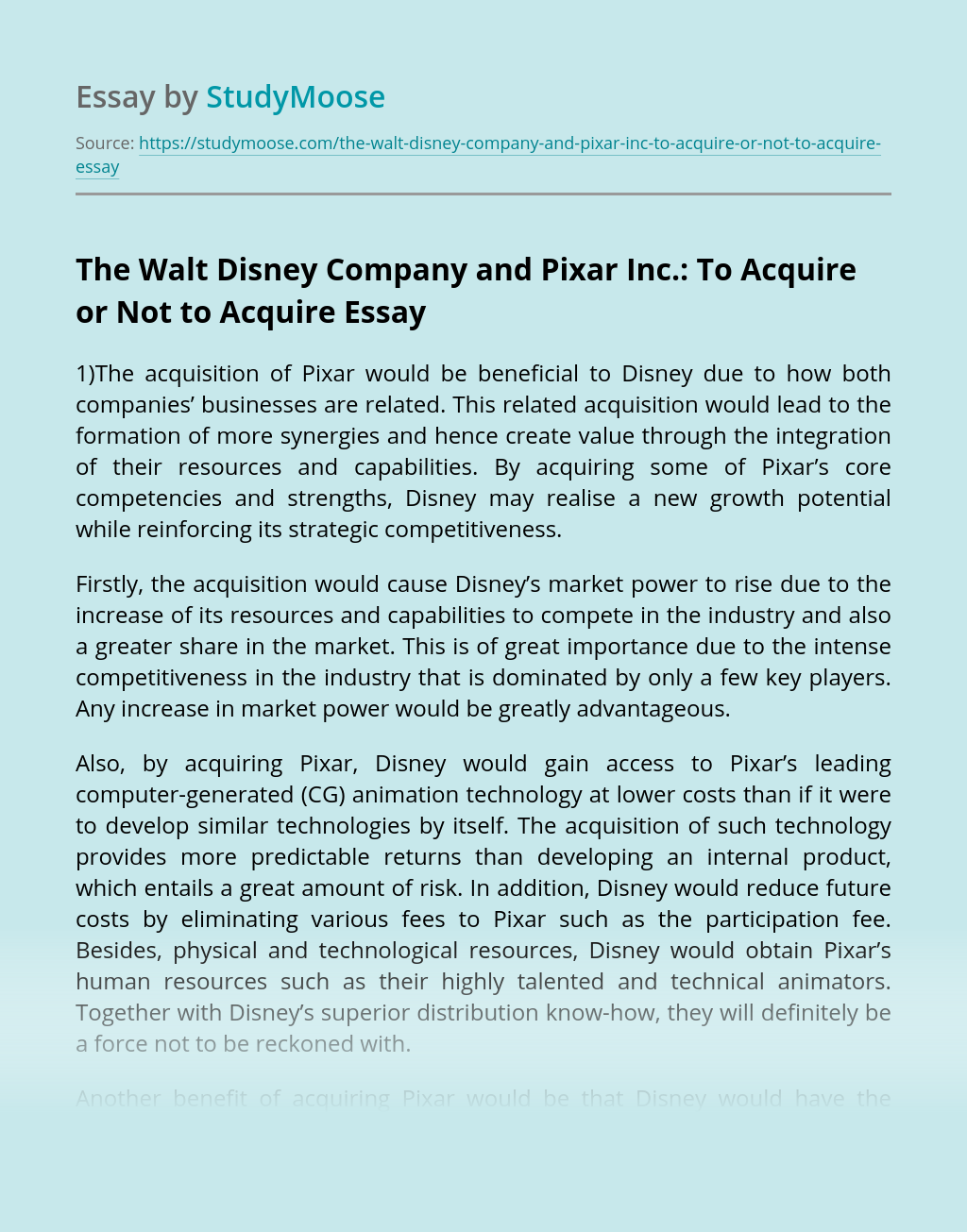