The vampire, from folklore to literature is described as a “dead person that awakens in the night to suck the blood out of the living”. (Bartlett, pg 1) The evolution of the vampire itself has seen drastic changes from the time of the vampire in folklore; where he was seen as a scapegoat, being the cause of the plagues and had to be killed to restore a healthy civilization to, Bram Stocker’s literary vampire; where the vampire had become the heroic figure and had to be blamed for all the victims that had past.

Don't use plagiarized sources. Get your custom essay on
“ The Vampire in Folklore vs the Vampire in Literature ”
Get custom paper
NEW! smart matching with writer

Both of these are based on the Penguin English definition of a vampire but how is it that the vampire today has changed so drastically from the one people feared in legends and folklore. One can say that the vampire in literature has mainly influenced the vampire we see today in movies.

The vampire seen in movies of the 20th century differs from the vampire in folklore because he has become an attractive, heroic and more than a highly sexual figure falling in love with the damsel in distress.

The vampire in folklore was described as being a hideous creature almost demon-like, like “ a “revenant” , a being from beyond the grave, which destroys life in order to continue its own unholy and unnatural existence (Bartlett, pg 1).

Unlike it, the more observant people might notice that in some of the more recent film versions of Dracula, such as “ Love at First Bite” and the Badham interpretation as well as the two comic books by Marvel, “Tomb of Dracula” and “Dracula Lives” issued in 1970 portrayed the vampire as a more attractive human being which soon to be followed by many other pieces of writings and movies such as the series Twilight.

(Senf, pg 2) The truth is, there is little amount of films that portrait the vampire being described as the hideous creature of Bram Stocker’s description.

The few films who did this are Murnau’s Nosferatu 1922, Tobe Hooper’s Salem’s lot 1979 and Tom Holland’s Fright Night 1985 not to forget Blade Stephen Norrington 1998. (Senf, pg 2) Bram Stocker’s description describes the vampire looking more like a beast than a human being unlike the charming good looking Edward from Twilight. “ The mouth, so far as I could see it under the heavy moustache, was fixed and rather cruel-looking, with peculiarly sharp white teeth; these protruded over the lips… or the rest, his ears were pale and at the top extremely pointed… ” . (qtd. Senf, pg 2) This description resembles very well the folklore description mentioned by Burns in “ A short history of vampire folklore” . The 20th century vampire portrays the vampire as being opposite from Bram Stocker’s description seeing him as a good looking fellow such as the one portrayed in Twilight. We must also look at the vampire’s characteristics to notice the difference between the vampire from the past and the one from today.

One thing we have noticed is that the vampire in folklore was seen as a single individual that must be killed for the good of society to bring peace at last, which represents the idea of the scapegoat, putting the blame on the vampire for the cause of the plague and that all diseases will vanish once the vampire is slain. The 20th century vampire has evolved from literature and many authors and directors have given him a role with a name. This means that the vampire is portrait as more than just an individual and has some kind of character built into the individual.

The word Heroism comes to mind when looking at how individual vampires have gradually become complex characters. If we compare the story of Lord Byron to Twilight and one of the main vampire characters Edward, we can see that they resemble very much each other. Both of these are too blame for their actions and have heroic qualities because they wish to take the responsibility for what they’ve done. Throughout the story of Lord Byron, we find out later on that he is a vampire and that he has very much so human characteristics.

Edward is the same since he tends to have human emotions for a girl. Carol A. Sanf sais so herself when making this statement . “ twentieth century writers and directors often portray the vampire as a more sympathetic character than he had been in either folklore or literature. ” (Senf, pg 3) Although Lord Byron might not have shown sympathetic emotions, we see him as the hero because he tries to resolve the conflicts that have arose throughout the story. The movie Twilight does this even more by making Edward fight his superiors for a girl he has feelings for.

Lastly we have noticed that the vampire in movies often starts to have feelings for a girl that has become more than sexual attention. The Lilith from Stu Burns “A short history of vampire folklore” is seen as a demon that has sex with men before eating the flesh out of them. These characteristics are very familiar in folklore because vampires would often show sexual attention before eating their victims. In the 20th century vampire, we see him has having emotions for his victim and wanting to turn his victim into a vampire as well so that they can live happily together.

Just like in Twilight, in Softly While You’re sleeping by Evelyn E. Smith the vampire does more than “ coerces his victims and ultimately robs them of both blood and soul”. (Senf , pg 4) In the story, Varri the vampire attempts to persuade Anna to join him to become immortal as well so that they can live together. (Senf, pg 4)This demonstrate that unlike the vampire in folklore, the vampire in the 20th century gained feelings for certain human individuals and would rather turn them into one of them than take their life.

We have seen the differences between the Vampire of folklore and have come to a conclusion that the vampire from the 20th century has evolved because of how it was portrayed in literature and the evolution has changed the vampire from a single individual brute to a vampire with human characteristics seen as good looking and heroic at the same time. We can only say that although the folklore vampire may have been seen as a disease at the time, pop culture sure has changed the way vampires are looked upon. It seems to me that every teenager dream to be like the handsome Edward from Twilight. 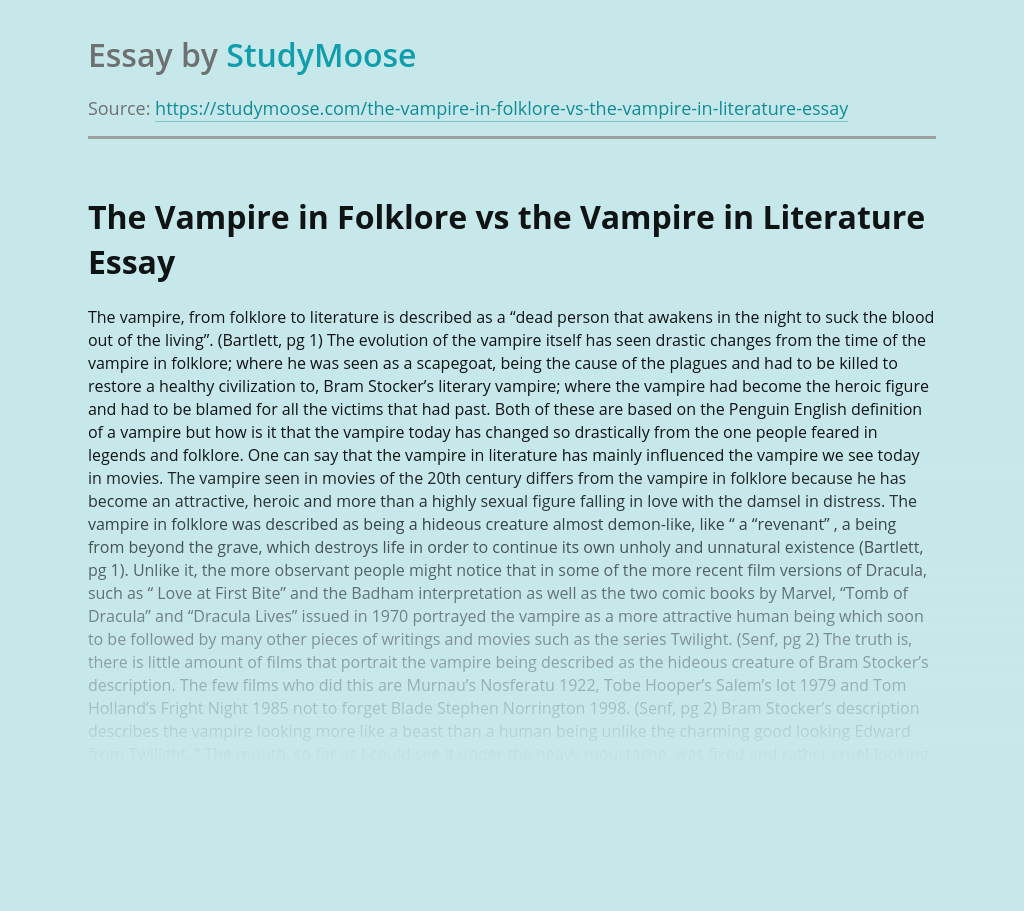