“The Time Machine” by H.G. Wells

In “The Time Machine” by H.G. Wells, the Time Traveler confronts a future that has apparently developed into a communist utopia, a belief system that Wells, a socialist, might well have supported.  The Traveler’s immediate reaction to the Eloi and his initial assumption that society has devolved into a classless cooperative reveals Wells’ bias towards a classless society. He also depicts the future as a beautiful, fruit-filled land instead of the dirty, smog-ridden reality that was Victorian era London.

Don't use plagiarized sources. Get your custom essay on
“ “The Time Machine” by H.G. Wells ”
Get custom paper
NEW! smart matching with writer

It is not until the Traveler becomes aware of the presence of the Morlocks that he begins to question his initial impression. The fact that the Morlocks have become cannibalistic, Eloi-herders as a way of life is incredible depressing to the Traveler and he sets about to document these changes. Wells writes eventually that the Traveler is wrong in his theory about how the Morlocks and the Eloi come to be, but never discusses what the real cause of the evolution might be.

From a philosophical standpoint, Wells development of the Eloi and Morlocks in his story is a remarkable commentary on his observations regarding the nature of man and how society might evolve. It is clear that in the Traveler’s initial opinion, the Eloi have developed from the upper class, from those who were too soft for manual labor and to enamored of recreational pursuits to challenge their minds. Likewise, the Morlocks are clearly supposed to have developed from the underclass and have resorted to violence and death as their way of life, never evolving to the point of problem solving or higher thought. In these most basic descriptions, Wells reveals his own bias towards the class warfare of Victorian England.

Indeed, the Morlocks’ propensity for flesh-eating might well have developed out of the satirical writings of Jonathon Swift and his “A Modest Proposal.”  Though in Swift’s essay it is the rich who eat the poor as a form of population control,  his commentary on the classes is very clearly echoed in “The Time Machine.”  Both men argue effectively that class differences in the British Isles will likely lead to one class eating the other. By the subtle change from Swift’s “Proposal” to Wells’ Morlocks, we find that Wells’ believes it is likely the working class that will become cannabalistic and that the upper class has no redeeming qualities other than the ability to stuff their faces.

Another philosophical issue facing the Time Traveler is the impact his travel will have on the world around him. This issue is central to the most recent film adaptation of the movie. In it, the Traveler attempts repeatedly to change the course of time to save his ill-fated fiancé from certain death.  In both the film and the novel, the Time Traveler is forced to eventually face that he is unable to change the natural progression of time.

The most interesting question here is whether he should have attempted to change time in the first place. Having seen the existence of the Eloi and the Morlocks and the eventual destruction of the planet, does the Traveler have any right to unwind, rewind or otherwise twist the fabric of time?  This question is largely unresolved in the novel, as the Traveler simply discovers that if he changes one event in the past, other events adapt to end with the same conclusion.

The other question that this demands an answer to is the theory of time itself and of predetermination. If the Traveler is unable to change destiny by changing a specific event and if time adapts so that what is supposed to happen does, in one fashion or another, is there truly any conception of self-determination or is everything predestined. In his novel, Wells’ makes an effective argument for the concept that things happen as they are ordained to happen and man’s impact on them is infinitesimal. He argues through the repeated deaths of the Time Traveler’s fiancé that fate is fate and cannot be changed.

The joy of Wells’ novel is that on the surface it is simply a fantastical voyage into a future that might be, but that once one begins to scratch the surface, he finds a commentary on social justice, industrialization and even religion, as some religions argue that man is pre-destined to live his life in a certain manner. 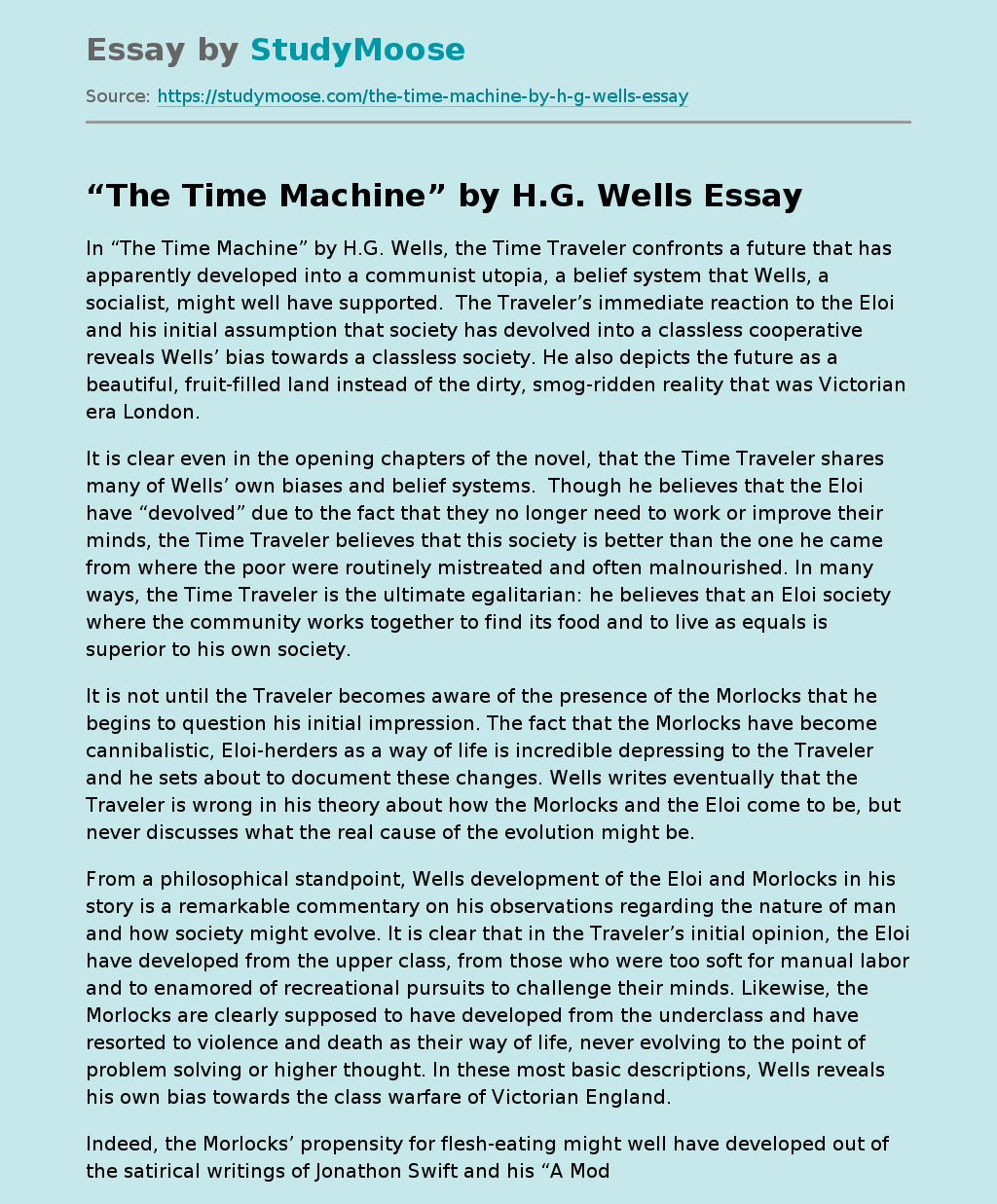