The Themes of Early American Literature

Throughout most of our American Literature readings the common theme that was being written about was religion, faith in God and in turn self-reliance. I believe that the authors of early America were contingent upon their religion and their faith to develop their own resources to aid them through the various trials and tribulations of their lives. One of the early authors that exhibited self-reliance is William Bradford. Bradford believed God to be guiding the Pilgrims and he on the right path and that every misfortune was an opportunity to follow His guidance and be thankful for “God’s good providence” (72).

Turn in your highest-quality paper
Get a qualified writer to help you with
“ The Themes of Early American Literature ”
Get high-quality paper
NEW! AI matching with writer

It is evident that Bradford was shaped by his power of faith and his belief in divine interventions. Bradford believed that it was “special work and hand of God” (65) that he and others would receive salvation and success. An aspect of Puritan belief is that women had a distinct role in Puritan society. The belief was that a woman’s place was in the home attending to their family and her husband’s needs.

Anne Bradstreet struggled with the Puritan way of life. She was a private writer, writing mostly poetry about her own life; all the more being a female writer was unacceptable by any society. Bradstreet’s self-reliance came from her writings.

She used her own thoughts and beliefs to power herself through an adverse society. An additional woman with concerns about society was Anne Hutchinson, who began discussing her ideals and opinions to the people of the community.

She believed that individuals are capable of having “direct communication with God and need not heed the laws of the church” (111). This idea was not in correlation with the Puritans, because they believed few people were able to speak to God. Hutchinson’s belief that any person(s) could have a direct mental and emotional relationship to God was unlawful and not proper for anyone especially for the women of this time.

Judith Murray writes of the stereotyping of females and how women are constantly trying to “hold their own in a [man’s] world” (568). Murray fought for equality and laid the foundation for what took another two centuries to achieve. These women, although reverent in their faith, had a strong sense of self-reliance. Thomas Jefferson used his powers of speech and leadership to show the colonists the vital importance for them to be absolved from Great Britain. Thomas Jefferson believed Great Britain was a threat and he wanted to protect the colonies.

In the Declaration of Independence Jefferson expresses his ideals and beliefs that all men are created equal and they have a right to protect themselves from a strong government they would no longer be subjective of the government of Great Britain. Obviously self-reliance was a common theme that had great significance on each of these authors’ lives and futures. Through their difficult life journey and self-created religious tribulations these authors all shared the common belief that they must not follow others but lead themselves and their communities by their own powers and resources to a greater purpose.

The Themes of Early American Literature. (2017, Feb 07). Retrieved from https://studymoose.com/the-themes-of-early-american-literature-essay 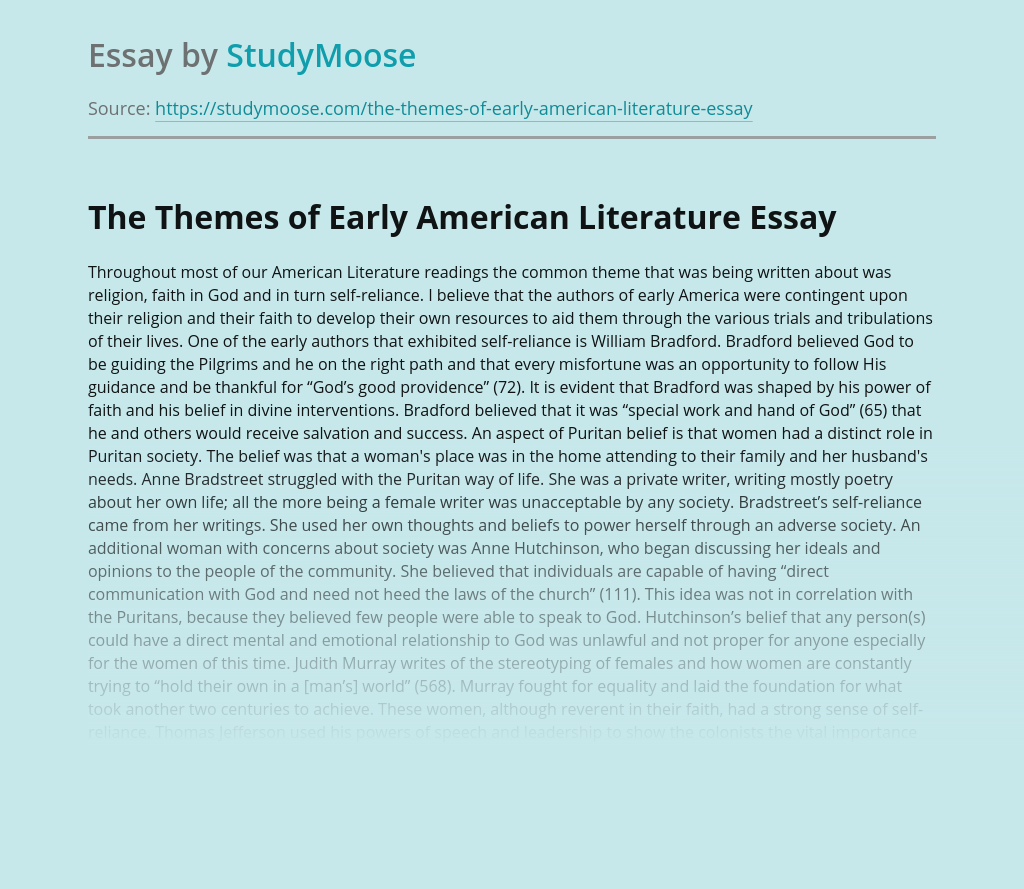 Turn in your highest-quality paper
Get a qualified writer to help you with
“ The Themes of Early American Literature ”
Get high-quality paper
Helping students since 2015
Stay Safe, Stay Original