Relationships in a Tale of Tungkung Langit and Alunsina

In the beginning everything was shapeless and formless. The earth, the sky, the sea, and the air were almost mixed up. In a word, there was only confusion. Then from the depth of this formless void there appeared the god Tungkung Langit and the goddess Alunsina. It was not known just where these two deities came from but it is related by old Bisayan folk that Tungkung Langit fell in love with Alunsina. After he had courted her for many years, they married and made their home in the highest part of heaven.

Don't use plagiarized sources. Get your custom essay on
“ Relationships in a Tale of Tungkung Langit and Alunsina ”
Get custom paper
NEW! smart matching with writer

There the water was always warm and the breeze was forever cool. In this place order and regularity began.

Tungkung Langit was a loving, hard-working god. He wanted to impose order over the confused world. He decided to arrange the world so that the heavenly bodies would move regularly. On the other hand, Alunsina was a lazy, jealous, selfish goddess. She sat at the window all day doing nothing.

Sometimes she would leave her home, sit down by a pool near the door, and comb her long, jet-black hair all day long. One day Tungkung Langit told his wife that he would be away for some time. He said he must make time go on smoothly and arrange everything in the world.

When he was gone, Alunsina set the breeze to spy on Tungkung Langit. Tungkung Langit found this out and he became very angry. After he returned home, he told her that it was ungodly of her to be jealous since there were no other gods in the world except the two of them.

Alunsina resented this reproach, and they quarreled. In his anger, Tungkung Langit drove his wife away. No one knew where she went. Several days later, Tungkung Langit felt very lonely. He realized that he should not have lost his temper. But it was too late. Once vibrant with Alunsina’s sweet voice, his home became cold and desolate. In the morning when he woke up, he would find himself alone. In the afternoon when he came home, he would feel loneliness creeping deep or soothe his aching limbs.

For months Tungkung Langit lived in utter desolation. Try as he did he could not find Alunsina. And so in his desperation, he decided to do something to forget his sorrow. The sight of the lonely sea and the barren land irritated him. So he came down to earth and planted trees and flowers. Then he took his wife’s jewels and scattered them in the sky. He hoped that when Alunsina should see them she might be induced to return home.

Alunsina’s necklace became the stars, her comb the moon, and her crown the sun. But in spite of these, Alunsina did not return home. Up to this time, the old folk say Tungkung Langit lives alone in his palace in the skies. Sometimes, he would cry out his pent-up emotions and his tears would fall down upon the earth. The people say that rain is Tungkung Langit’s tears. When the thunder rolls, the old folks say that it is Tungkung Langit sobbing, calling for his beloved Alunsina to come back – entreating her so hard that his voice reverberates across the fields and countryside.

The Tale of Tungkung Langit and Alunsina Story (Visayan Myth)

Relationships in a Tale of Tungkung Langit and Alunsina. (2016, Dec 11). Retrieved from https://studymoose.com/the-tale-of-tungkung-langit-and-alunsina-essay 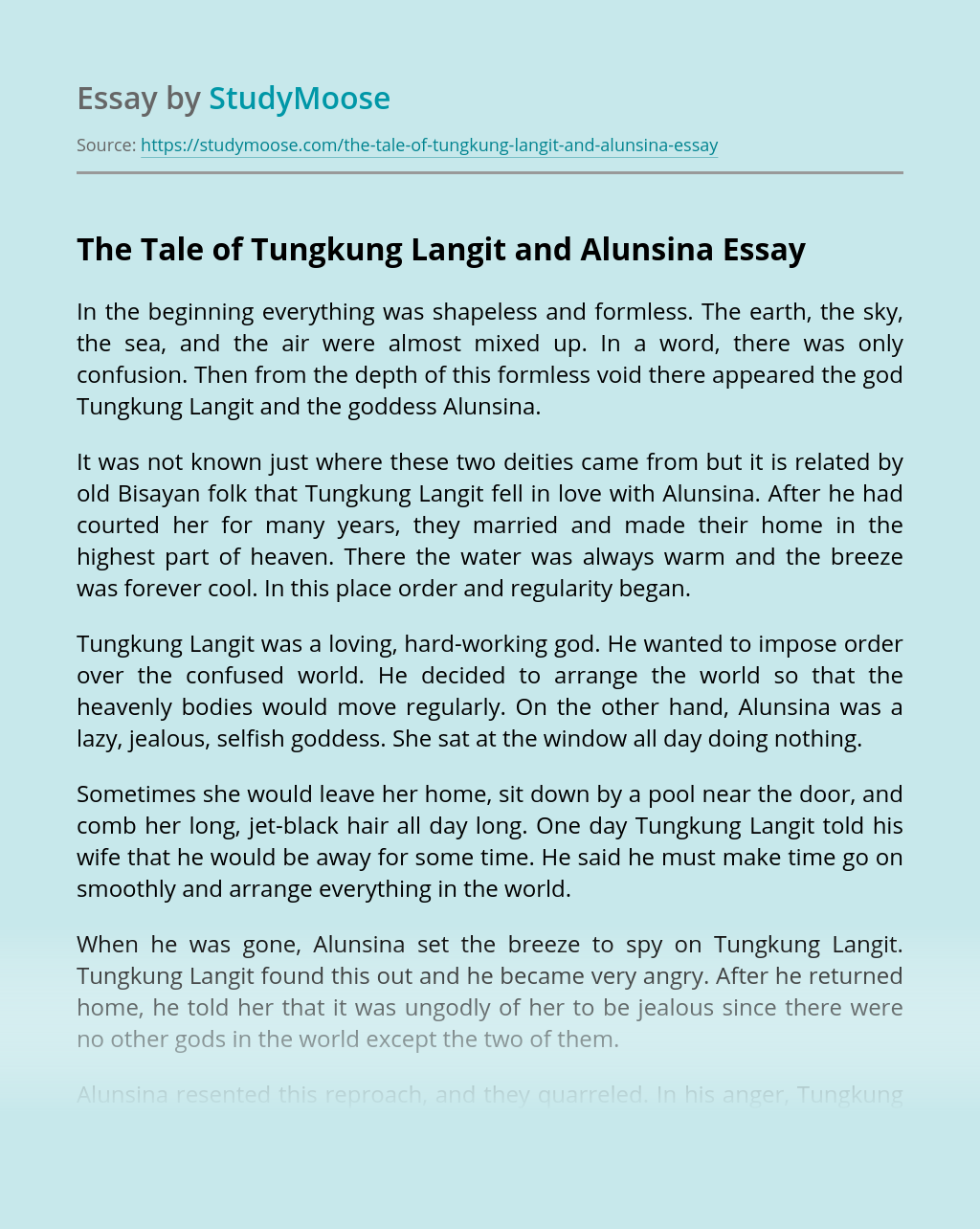