The specific heat cpacity of the substance

Don't use plagiarized sources. Get your custom essay on
“ The specific heat cpacity of the substance ”
Get custom paper
NEW! smart matching with writer

WEBSITES www. atlans.org/elements/heat/ol 02-Feburary-2002 This websites gives information on the laws of thermodynamics’, Entropy and internal energy www. physics. about. com/library/dict January-2002 This website provided information about internal energy and entropy. MODIFICATION In my method I had originally planned to take thermometer reading after every 2 minutes but when testing the equipment and took the readings I found out the temperature rose rapidly and was unable to obtain sufficient readings that would produce a graph, so decided to take readings after every 1 minute.

To prevent heat loss I had planned to use a layer of wool to wrap around the beaker but decided to add more layers of aluminium bubble wrap to keep heat loss as minimal as possible. THE RESULTS Implementing: When I finished testing the equipments the heater was still hot which would have meant the next experiment would have had unfair testing conditions. To resolve the problem I dipped the heater in cold water for 7 minutes to cool it off and placed on the table for further 3 minutes gain room temperature.

During the first experiment, the thermometer that I was using had a scale reading from -5 to 100, which made it very difficult to obtain accurate reading. To minimise error with readings I used the same size thermometer but with a smaller scale reading from -5 to 50, that was much easier to see the temperature. The final condition to change from original plan was that I used a glass lid apart from using a rubber lid to cover the beaker. This was because when rubber lid is used the thermometer could not be viewed without being lifted up but with glass lid, eliminated the need to move around the thermometer to see the temperature.

CONCLUSION Resulting from the three experiments, I was able to work out average for the energy used and temperature, which I used to work out the temperature rise. To be able to analyse the results properly and accurately I decided to plot a graph using the average temperature rise against energy used. When I plotted the graph, the out come of the results was a straight line when I drew a linear line of best fit. The out come of my graph agrees with my prediction, which stated that the results should produce a straight line on the graph and it would not go through the origin in the real world.

The Fact that ethanol is a liquid but has a significantly lower specific heat capacity compared to water this can be explained by the fact that ethanol’s is more dense than water and it’s particles are much closer together than those of water which makes it easier for heat to be conducted easily by particles in ethanol. This also explains why the boiling point of ethanol, (78. 3 c) is lower than that of water which is 100 c and this also supports my understanding and prediction that ethanol requires less heat than water. EVALUATION The experiment procedure that I chose for my investigation is reliable able minimised the margins of errors.

This is supported by the fact that all my results were all on of very close to the line of best fit on the graph. The fact that when I used error-bars they were all being touched by the line and the R^2 value is 0. 9982 and no anomalous results strongly suggest that the procedure was reliable. The fact that there are no anomalous results and the R&2 value is very close to 1 means that the measuring equipments and technique were very accurate and this is supported by the fact that the all observation all produced readings which are very similar to each other which helped to obtain good averages.

The fact that I used a joule meter a part from using voltmeter and ammeter then working out the energy myself eliminated any calculation errors. Even though the measuring techniques and equipments helped produce reliable results, there are still errors in the experiment because the line didn’t go through the origin and the value that I worked out for the specific heat capacity is a bit less compared to the actual value. The procedure I used produced errors, which affected the whole experiment.

The errors that caused by the procedure are that the all the electrical heating was not all used to heat ethanol because some heat had escaped through convection, as the air in the room was cooler. Some energy was used to heat up the heat, heat up the beaker and thermometer. The fact that the lid did not cover the whole top because of the gaps for the heater and thermometer was being converted to the cooler air in the room.

The limitation from the experiment that stopped me from obtaining a value that is 100% accurate was the heat loss through convection and these can be improved by using a lid that covers the entire top and the gaps for thermometer and heater don’t have any space for air to enter or escape. The fact that some heat energy goes towards heating up the equipments, the equipments should be kept in a temperature that when any electrical energy is given it will all be used to heat up the ethanol and beaker to be wrapped with good insulators so any heat conducted to the beaker will not escape.

Doing all these will decrease the amount of heat that is being used in other way than heating the substance. The main sources or errors would be the taking and recording of the readings. I had to observe and record both readings every minute, which meant that some records were few seconds late or early. This explains the reason the experiments producing minor differences when repeated. The way to overcome this problem is to have three people taking single reading and these would increase the accuracy of the results.

The specific heat cpacity of the substance. (2017, Oct 09). Retrieved from http://studymoose.com/the-specific-heat-cpacity-of-the-substance-essay 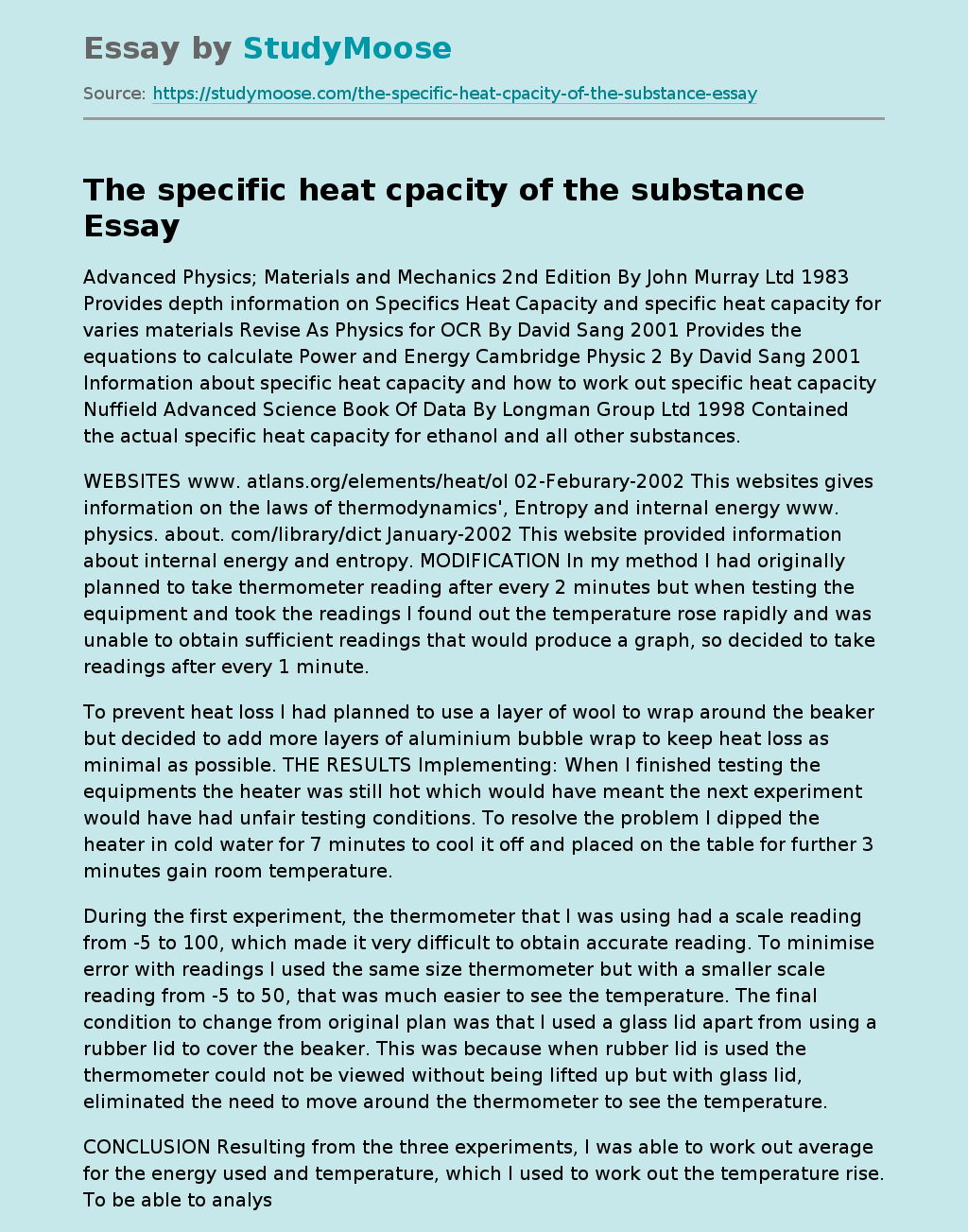