The resurrection of Jesus Christ

The resurrection of Jesus Christ is the central aspect of more than two billion Christians in this world and billions more who have since put their faith in Jesus these last two thousand years. The Christian religion is unique in the fact that its founder proclaimed that he is the son of God and that if one simply believes in him, they shall obtain eternal life. There is no other religion similar to that. Salvation cannot be found on this earth or in the completion of daily tasks and rituals but is a gift, given to God through Jesus.

The resurrection of Jesus Christ is so important that the entire faith relies upon this event. If Jesus was, as other religions attest: only a prophet, then Jesus is therefore made a liar and the greatest con artist in the history of the world. However, if he is who he was he is, then Jesus is the only way in which one receives eternal life.

It can therefore be seen how important the resurrection is to Christians and they are reminded of such sacrifices as well as the importance of Jesus’ death, burial and resurrection, this Easter Sunday.

In the Old Testament, the Scriptures profess of a savior who will come to save man from his sins. Amazing detail can be seen in these Old Testament passages concerning where this savior would come from, how he would be received by the public and authorities and how he would die and then be raised from the dead.

When Jesus was preaching that he was the Messiah, this was seen as severe offense of blasphemy towards the Jewish authority, as they were still waiting for their savior to come. According to the Bible, and specifically the New Testament, Jesus Christ came to this world to save man from his sin. With the plague of thousands of sins committed by any individual with an average lifespan, he therefore cannot enter God’s kingdom of heaven, which is holy, with a body and works that are unholy.

It then comes upon Jesus Christ to be the savior of God’s people by sending on this earth, his only son which died on a cross, was buried and then was resurrected on the 3rd day. In the Gospels, the first four books of the New Testament, in which the life and times of Jesus are given, the resurrection is described in all of these accounts. One such can be found in the book of Matthew 27:52-53. And the graves were opened; and many bodies of the saints which slept arose, and came out of the graves after his resurrection, and went into the holy city, and appeared unto many. (Bible, 2000 p. 689) The resurrection is repeated in all four of the Gospels, due to its utter necessity of understanding if one wishes to consider himself a Christian and deserving, only through the death of Jesus Christ, eternal life in heaven.

According to the Bible, after Jesus was resurrected, he began to preach to his followers before he ascended into heaven. Eleven of his twelve disciples considered the resurrection so very important, ten of them chose death, imposed upon them by different state authorities which feared this new religion and its appeal, then deny what they had seen for themselves. This is a testimony to the power and importance of the resurrection of Jesus Christ to Christians. The book of Acts, or Acts of the Apostles, goes into detail, the actions of the apostles as they adhere to the Great Commission, the order given by Jesus before he was crucified, that it is the main purpose of Christians to spread the teachings and promises of salvation, as seen only by Jesus Christ.

To Christians, the Great Commission is still in effect today and is what propels missionaries to travel all over the world, teaching and preaching the news of Jesus Christ and his promises of eternal salvation. In all of these teachings, the resurrection is included, or rather seen as the most important aspect of the Christian faith and plan for salvation. “If Jesus was not resurrected from the dead, then he is only a man and the Christian faith is based upon a myth.” (Johnson, 1998 p. 45) This then makes the resurrection of Jesus Christ to be of the utmost importance.

For those who believe in the resurrection of Jesus, the resurrection takes on a special meaning. This sacrifice of Jesus, the one who is seen by Christians as the perfect and blameless son of God in order to save fallible sinners from the torment of hell, is an important and emotional sacrifice. It is this sacrifice that motivates Christians, not only in their faith but also in the continuation of their church attendance and private and public devotions.

The Christian martyrs in the immediate centuries following the resurrection of Jesus, gladly went to be fed to the lions or killed in some other way in order to try and duplicate, although not copy, the sacrifice that Jesus made for those who believe in him. Even contemporary Christians are moved by the sacrifice of Jesus in this manner.  The 2004 film The Passion of the Christ compelled a lot of reaction. One of the reactions by the audience was humility and even tears as they saw what might have happened to Jesus in order that he may save their souls from heaven. If the resurrection of Jesus never was attached to these sacrifices of being beaten and crucified, then he would not be the one who had come to fulfill prophecy and therefore, would have been seen as a heretic and there would have been made, no special attention to Jesus.

The resurrection of Jesus remains central to the faith of Christians. Without the resurrection, the prophecies of the Old Testament remain unfulfilled and Jesus was nothing more than the greatest deceiver in the history of the world who received a fitting punishment. However, if the resurrection did occur and the promises of Jesus are then attached to his claim that he is the son of God and all that he said is true, then belief in the deity of Jesus and his resurrection, still remains the only way in which an individual receives eternal life in heaven. As it is written in the famous Bible verse John 3:16: “For God so loved the World that he gave his only begotten Son, that whosoever should believe in him should not perish but have everlasting life.” (Bible, 2000 p. 825) Jesus Christ still remains the most important figure in human history. Had the resurrection never occurred, it seems doubtful that his importance would have remained the same.

Gibson, Mel The Passion of the Christ. Icon Productions

The resurrection of Jesus Christ. (2017, May 10). Retrieved from http://studymoose.com/the-resurrection-of-jesus-christ-essay 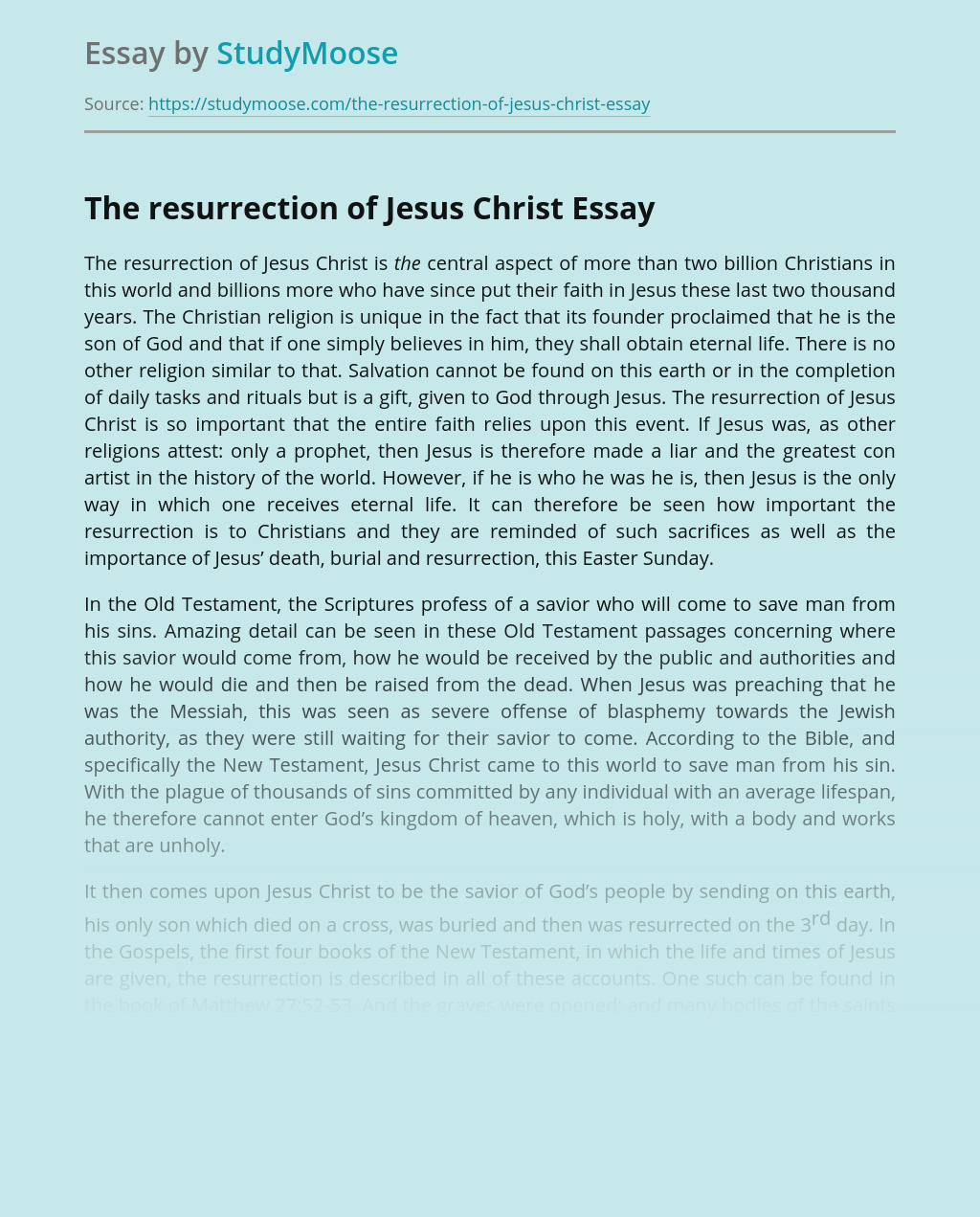 Don’t waste time
Get a verified writer to help you with The resurrection of Jesus Christ
Hire verified writer
$35.80 for a 2-page paper
Stay Safe, Stay Original