The Notion of Gun Control

Don't use plagiarized sources. Get your custom essay on
“ The Notion of Gun Control ”
Get custom paper
NEW! smart matching with writer

According to gun-control.procon.org “A majority of adults, including gun owners, support common-sense gun control such as background checks, bans on assault weapons, and bans on the high-capacity magazine”/ “97% of American voters and 97% of gun owners support universal background checks. 67% support a nationwide ban on assault weapons, and 83% support mandatory waiting periods for gun purchases.” Gun control laws would reduce the societal costs associated with gun violence. High powerful guns are used in almost every mass murder.

For an example, Las Vegas shooting, A mass murder killed 58 people and 489 wounded. According to washingtonpost.com “The Las Vegas shooter modified a dozen rifles to shoot like automatic weapons. Law enforcement officials said Tuesday at least a dozen of the 23 firearms recovered in Las Vegas were semiautomatic rifles and HIGH CAPACITY Magazine legally modified to fire like automatic weapons, using an alteration known as a bump fire stock.” “Those components used together in a weapon suggest a desire to shoot large amounts of automatic-like fire into masses of people without much concern for accuracy, as the recoil from a simulated automatic fire would make it difficult to hit specific targets at a long range.

Mass shootings are associated with states without laws restricting large-capacity magazines. 67 percent of homicide victims were killed using a firearm. Approximately 1.4 million people have died from firearms in the U.S. between 1968 and 2011. This number includes all deaths resulting from a firearm, including suicides, homicides, and accidents. Guns are used around 60% in crime, How many times do people use guns as self-defense? Guns are barely used in self-defense so bans should be approved. According to defensive gun use “A study published in 2013 by the Violence ytPolicy Center, using five years of nationwide statistics (2007-2011) compiled by the Federal Bureau of Investigation found that defensive gun uses occur an average of 67,740 times per year.” “The use of guns in self-defense by private citizens is extremely rare.

VPC research has found a gun is far more likely to be used in a homicide or suicide than in a justifiable homicide. More guns are stolen each year that are used in self-defense.” Guns can also be accidental, even if the owners are trained. According to the NETguncontrol “, 505 deaths due to accidental or negligent discharge of a firearm” “Suicides are the second-leading cause of injury death, with 41,000 a year and half of that are used by guns.” Gun prevention should be more enforced.

The Notion of Gun Control. (2020, Sep 05). Retrieved from http://studymoose.com/the-notion-of-gun-control-essay 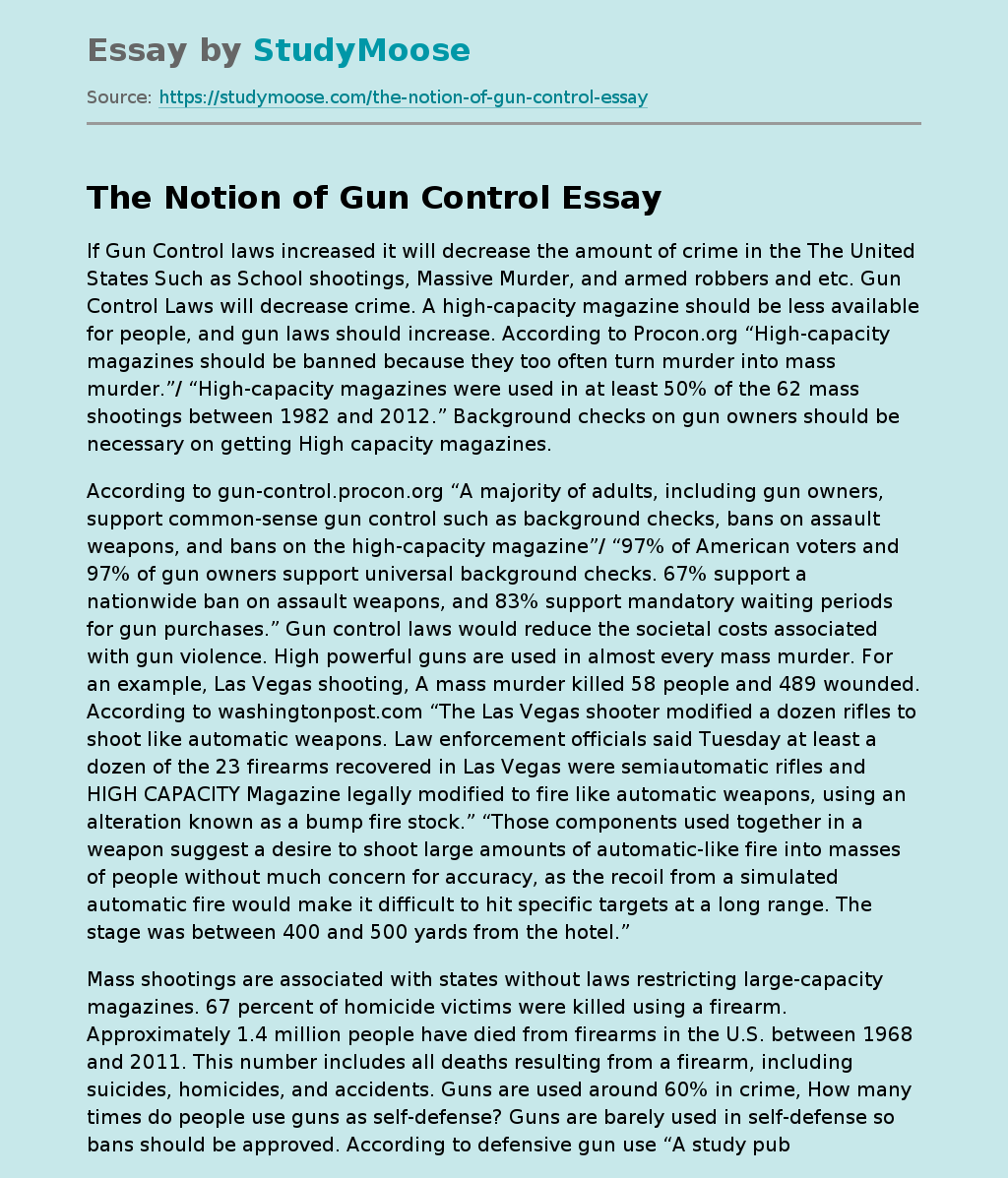