The Nile River is in Africa. The name Nile comes from the Greek word “Neilos”, which means valley. The Nile starts in Burundi and flows northward through Northeastern Africa. It flows through Egypt and dumps into the Mediterranean Sea. The Nile River is 6,670 km (4,160 miles) in length and is the longest river in the world. The Nile River had a huge impact on Egyptian history because of wildlife, plants and the flooding. The wildlife had an impact on Egyptian history because of the, Nile crocodile, its diet and the Nile Perch.

The Nile crocodile is a reptile that can reach a length of over 10 feet and weigh up to 1,500 pounds.

Crocodiles swim with their tales, although their back feet are webbed, they barely use them under water. The Nile crocodile mostly hunts gazelle, buffalo, wild dogs and wildebeest. It uses its strong teeth to pull the animal under water until it drowns, then waits for it to rot and eats it.

The plants had an impact on the Egyptians also because there was plenty to eat and grow. They grew crops like vines, pomegranates, melons, figs, vegetables and wheat or barley.

The floods supplied the water and rich soil needed to help grow the crop. The Ancient Egyptians also grew flax which is then made into linen. Reeds also called Papyrus grew near the Nile providing supplies to weave. Papyrus means “That which belongs to the house. ” The English word paper is from the word papyrus. Other plants around the Nile include: ebony, banana, rubber, bamboo and coffee shrub.

Found in the Nile River are lotus, paper reed, fig, date palm and mulberries. Plants had a big impact and I think they will for a long time. Flooding of the Nile River was a great help to the Egyptians. The rains in Africa and the Ethiopian highlands along with the melting snow caused the Nile River to flood. With the flood, the Egyptians could water their crops and retrieve rich fertile soil. The Egyptians used a tool called a Nilometer to record how high the Nile was during that year. If the flood was too high, it would destroy the crops. If the flood was too low, there was famine.

The Ancient Egyptians called the River Ar or Aur (which means black) because of the fertile soil left behind after the flood. Because of the flooding, the bank of the Nile is called the Blackland. That is why the Nile River had an impact on the Egyptians. The Nile River had a huge impact on Egyptian history because of the wildlife, plants and flooding. Kids learn a lot about Egypt and it is important they know about Egypt and its history. We would not have this history if it wasn’t for the Egyptians and the Nile. It was very important and still is and will be for a very long time. 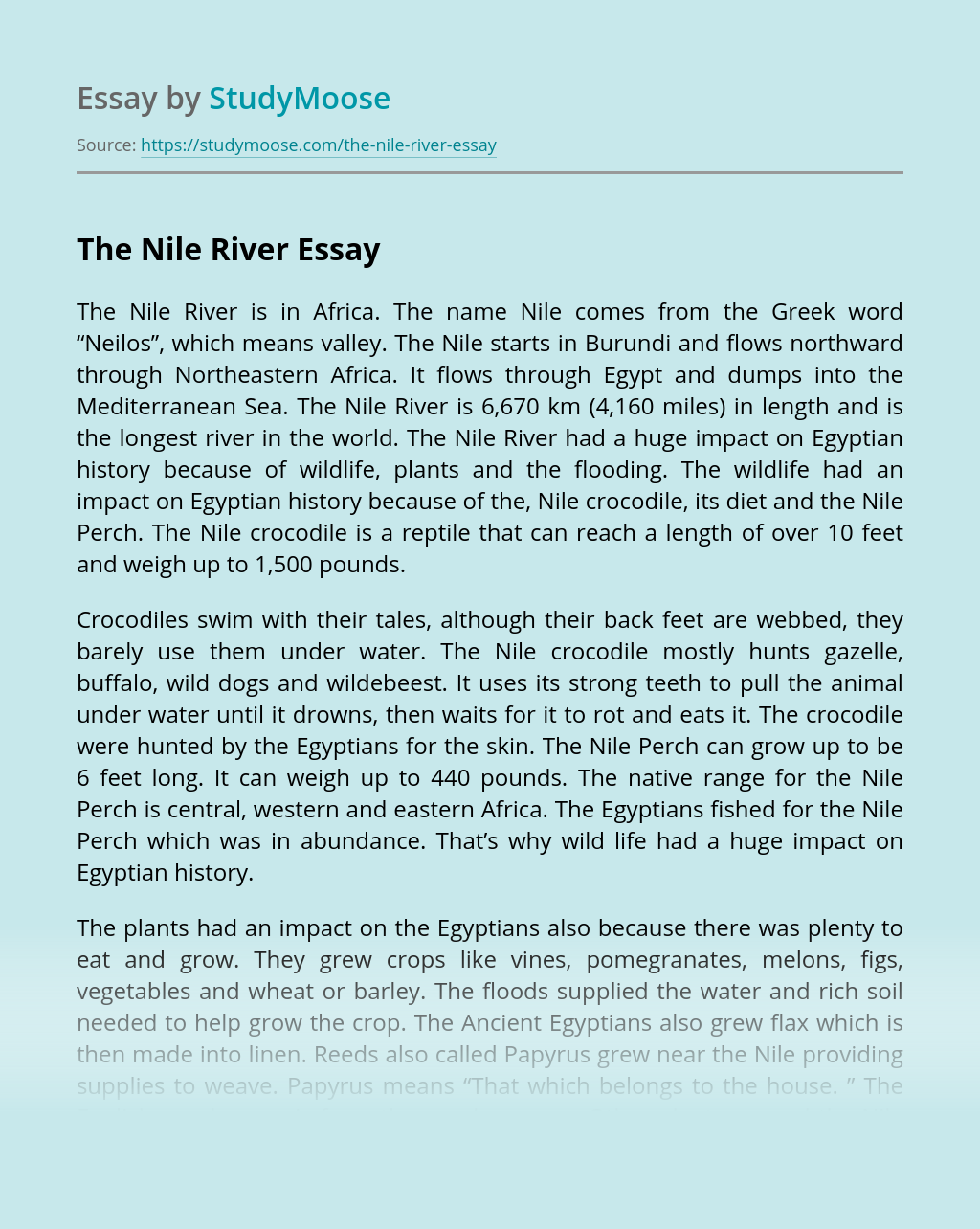