The Nature of Man

The nature of man is a subject that dates back centuries, though it is one that is still highly debated today. Philosophers, sociologists, and even sociobiologists have brought evidence leading to various conclusions to the table, so the question still stands. Mencius said that man’s nature is good, while Hsun Tzu argued from the opposite side. Centuries later, John Locke published a theory relating the nature of man to a blank piece of paper, stating that man is neutral until he learns otherwise, and goes even further to speak of man’s need for a “social contract” with a proper government.

Don't use plagiarized sources. Get your custom essay on
“ The Nature of Man ”
Get custom paper
NEW! smart matching with writer

During this same time period, fellow Englishman Thomas Hobbes also stated man’s need for government and a social contract with the people, but he did not believe that the people had the right to begin a revolution should the government not hold up its end of the contract. Still later, in the late 1990’s, Edward Wilson published his work, The Fitness of Human Nature, stating that man possesses both qualities that are learned, and characteristics that humans not only share with each other naturally, but with many members of the animal kingdom.

Proficient in: Nature Vs Man

He helped to establish Sociobiology, the scientific study of the biological aspects of social behavior in animals and humans, breaking ground in the debate of nature verses nurture. Personally, I agree with the theory put forth by both Locke and Wilson, that man is born a blank slate, and that his nature is inevitably learned, and built based upon the surroundings he is raised in, but that there are genetic factors at work shared by all humans, that can be considered human nature.

Though Mencius believed that all men were born inherently good, and Hsun Tzu believed they were all born evil, they made some excellent points as to the nature of man being shaped by his surroundings. Mencius once stated that “In good years, young men are mostly fine. In bad years they’re mostly cruel and violent. It isn’t that Heaven endows them with such different capacities, only that their hearts are mired in such different situations” (Mencius 96).

With good times bringing about good men, and bad times bringing about the opposite, I feel that Mencius used an invalid argument for the nature of man being good, but an excellent argument on the theory of the “blank slate. ” While he does make some valid points in the direction of his belief, I take his work as evidence in the side of neutrality. Hsun Tzu argued that good was not something man was born with, but that it was learned and must be actively practiced to overcome the greed he believed man was born with.

He states that Mencius is not just wrong in his philosophy, but that he “has not really understood man’s nature nor distinguished properly between the basic and conscious activity” (Hsun Tzu 101), meaning that he is wrong because he cannot differentiate between what is learned and what is natural, though I feel he suffers from the same condition. A baby is not born with a taste for wealth; he acquires it if he is raised in an environment in which wealth is important to those around him.

If man were not born a blank slate, I feel that there would not be such abundance of both good and evil men in the world. If Mencius or Hsun Tzu were right, I would expect to see one group far outnumber that which does not come naturally to men, be it good or evil. The argument of man’s theoretical nature is continued by English philosophers John Locke and Thomas Hobbes, who go beyond the base of good and evil to more fully elaborate what is is that defines the nature of man.

These men agreed that people needed a government of some sort in place to keep it’s citizens from the “state of nature”, or a state lacking laws and social structure, and that it’s citizens needed a “social contract” with said government, in which they would give up some of their freedoms in exchange for “the protections and opportunities of a civil society” (Hobbes 119). Hobbes believed that all men are born as equals, and that, though one man may be more fit physically or mentally, it is nothing that can not be feigned by another man.

Hobbes explains this in his statement; “Nature hath made men so equal in the faculties of body and mind as that, though there be found one man sometimes manifestly stronger in the body or of quicker mind than another, yet when all is reckoned together the difference between man and man is not so considerable that one man can thereupon claim to himself any benefit to which another may not pretend as well as he” (Hobbes 120).

Hobbes also believed so strongly that the government was necessary to keep people from the “state of nature” that he opposed revolution, as “authoritarian governments were necessary to keep human beings worst impulses under control” (Hobbes 119). His contemporary, John Locke, also followed the belief that all men are born equal, but related the mind to a piece of “white paper, void of all characters” (Locke 126). He felt that man’s nature was shaped by his experiences, and how he interpreted those experiences within himself.

Like Hobbes, Locke believed that a government must be in place to hold back the state of human nature, but unlike his contemporary, Locke was of the opinion that if the government did not uphold the values it was meant to protect, its people had the right to make a change, be it revolution or otherwise, in the government, so that it may fulfill its side of the contract. I find Locke’s philosophy to be the preferred knowledge to follow, as it explains the nature of man, but allows for those in the future to expand upon the theory, and grants far more power to the people.

Further more, Edward O. Wilson’s work, published in 1998, causes the debate of human nature to spread from the fields of philosophy and sociology into biology. Wilson wrote that human nature is “the epigenetic rules, the hereditary regularities of mental development that bias cultural evolution in one direction as opposed to another” (Wilson 145). Epigenetics is defined as the study of inherited changes in appearance or gene expression caused by mechanisms other than changes in the underlying DNA sequence.

Wilson placed human nature under this category because he believed that the human brain formed its characteristics based on the theory that “Brains that choose wisely possess superior Darwinian fitness, meaning that statistically they survive longer and leave more offspring” (Wilson 145). These brains that chose more wisely than that of their peers lived on, according to Wilson, within their offspring, eventually causing the traits of their ancestors that made them superior to become hardwired into the brain, no longer a rare advantage, but a common trait of all humans.

Now, working from the assumption that all humans today share their ancestry beyond a certain point in history, being the evolutionary link between ourselves and apes, it would make sense that certain traits we consider to be human nature, such as habits of sexual reproduction, or human’s focus on status within a structured society, have come naturally to us because these are things our ancestors used to outlive their competition. Wilson went on to comment that human evolution is extremely unique in that “a large part of the environment shaping it has been cultural” (Wilson 146).

This means that the traits we are born knowing today could have been the very same traits that our ancient ancestors had to learn in order to survive. I consider this evidence to further Locke’s “blank slate” theory, because, though these traits are now in our nature, they were once something that had to be written upon the empty pages of the human mind. In conclusion, I find that men are born within a neutral state of being. In our world there are good men, there are evil men, and there are those that are just trying to succeed in whatever it is that they do by means of both good and evil.

I find it hard to comprehend that all men are born leaning to one side or the other with such a balance between the two. Philosophers have spoken on the nature of man for centuries; scientists have now joined the debate, exploring the mystics of why people do what they do, with great results in the directions of learned traits versus what we would call human nature. Sociobiology, the scientific study of the biological aspects of social behavior in animals and humans, is a field that did not exist 50 years ago, and I feel it could easily be described, in simpler terms, as the study of human and animal nature.

Perhaps this is a question, like many, that will merely go unanswered, regardless of the masses of people studying the subject; perhaps not. In finding the answer to the question of human nature, we may be able to isolate the difference between what is learned and what a human is born capable of, and that could be the key to furthering the way we learn, or the manner in which we teach the generations to come. Maybe our offspring will be capable of learning college grade material in elementary school, making the possibilities of human advancement endless. 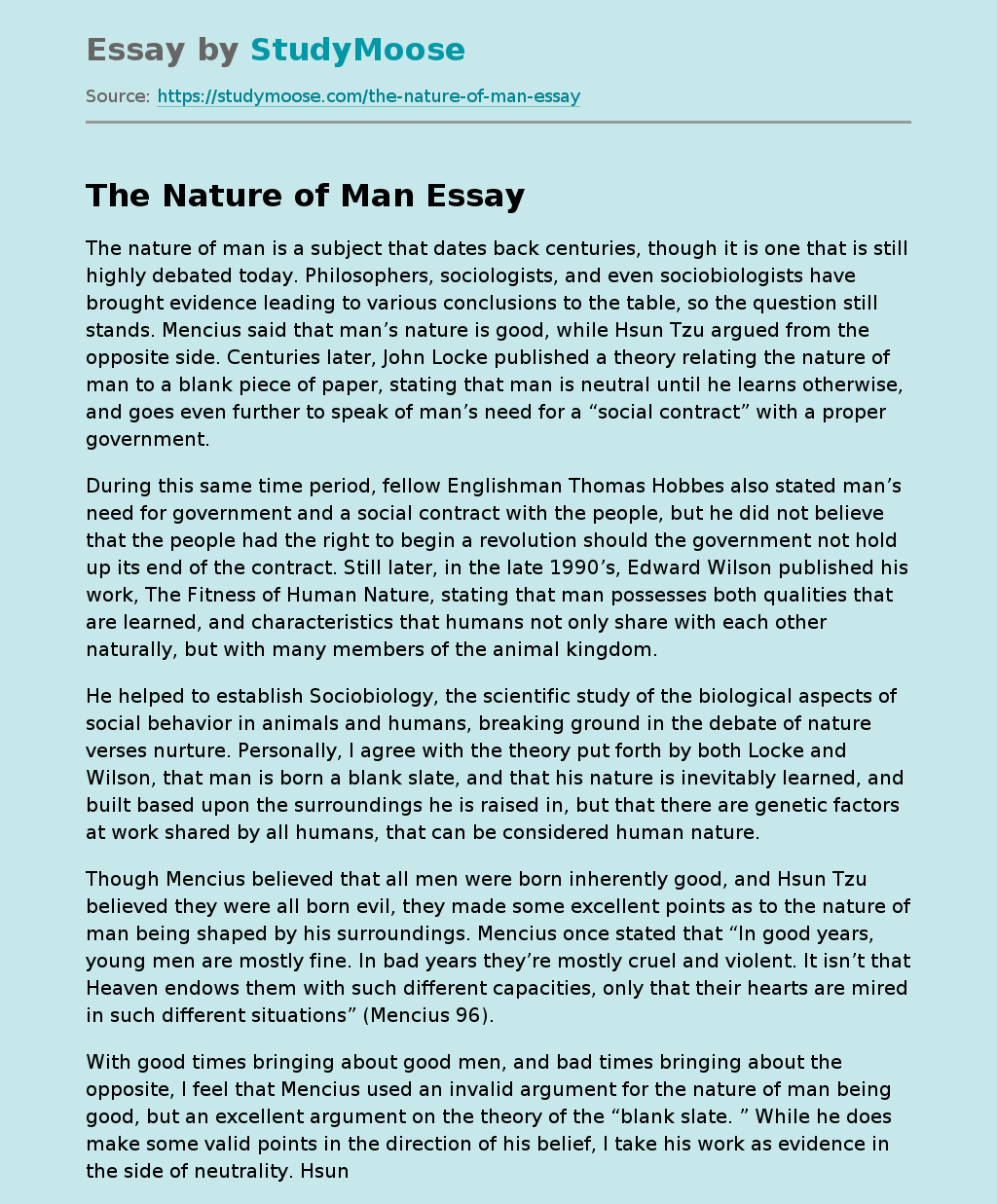