The most important characteristics of a society

Don't use plagiarized sources. Get your custom essay on
“ The most important characteristics of a society ”
Get custom paper
NEW! smart matching with writer

So I do not agree with the statement that one must study major cities to understand a society.

Admittedly, the major cities of a society is like a mirror reflecting the visible characteristics of a society, modern or historical, real or fantastic. New York is the center of the American finance industry. It is also one of the most importance centers for arts and culture in the U.S. And, in a country that styled itself as a “great melting pot” of people from all of the world, it is ethnically diverse.

Obviously, economically advanced, artistic attainments, and ethnic makeup are among the most important characteristics of the young and developed country, one would learn a lot about American society by looking at New York. Colombo is the economic hub of Sri Lanka. Most people living here are not inherent land owners but tenants. They spent a whole different life style which is a combination of western culture and eastern culture than there relatives who is living few hundred kilometers away from the capital leads a more traditional life style.

So if one comes to a conclusion about the whole society just by studying a major city it will be a huge deviation from the truth.

City is only one facet of a society. By closely observing only the major cities while leaving apart the other minor cities, towns and rural areas would definitely not help in understanding a society. For instance, Shanghai, a major city in China, features with fast-paced life style, prosperous commerce, impressive skyscrapers and ever-changed technological progress, which are indeed important characteristics of modern China. You can witness the rapid development of China by studying its major cities. However, the same scenes could be replicated in New York, London, Seoul and any other major cities around the world. Major cities are almost always subjected to outside influences, is not a good reference of the society because it does not clearly reflect the inherent spirit. To better understand China, one should studying the villages and small towns where the traits and characteristics of real China would still be preserved.

Since smaller communities are not as connected or updated as major hubs, they don’t integrate and assimilate with other societies as much. Namely, they don’t globalize at as fast of a rate as major cities. Therefore, one is more likely to discover the unique history, deep rooted traditions or culture of China if one investigates into smaller communities.

The most important characteristics of a society. (2016, Apr 10). Retrieved from https://studymoose.com/the-most-important-characteristics-of-a-society-essay 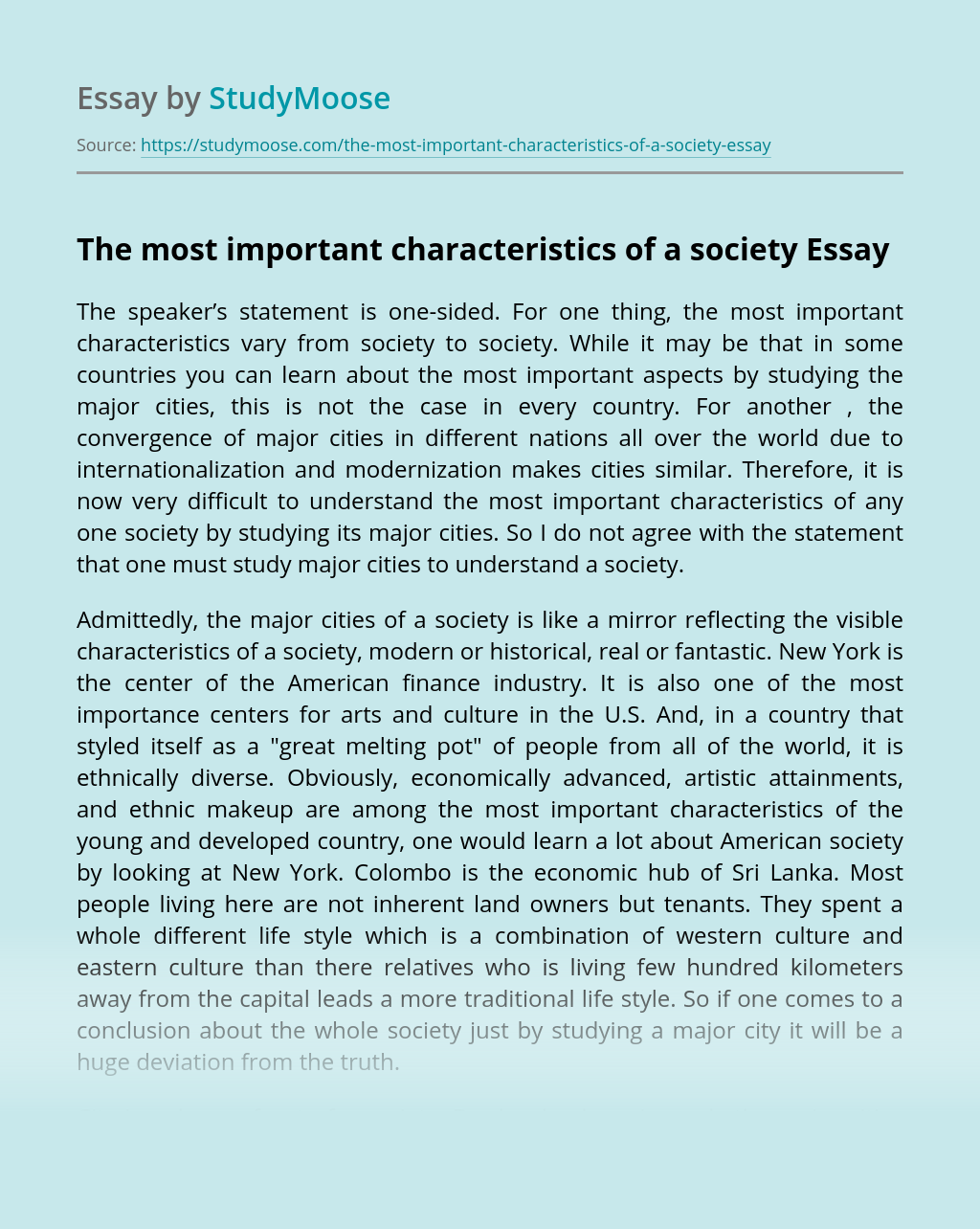