“The Mirror with a Memory” by James West Davidson

In Chapter 8 of After the Fact in the article, “The Mirror with a Memory” by James West Davidson and Mark Lytle, the authors tell the story of photography and of a man names Jacob Riis. Riis came from Scandinavia as a young man and moved to the United States. Riis firsthand experienced the bad conditions in the heart of the slums of New York. He worked from place to place, doing odd jobs until he found a job as a police reporter for the New York Tribune.

Don't use plagiarized sources.
Get Your Custom Essay on “The Mirror with a Memory” by James West Davidson Just from $13,9/Page

Riis lived in a slum called “The Bend.” When he became a reporter, Riis aspired to make people see the awful conditions of “The Bend.” Riis was continuously disappointed because his articles did not receive much attention or sympathy he was looking for. He then vowed to write a book called How the Other Half Lives. In his book, he would detail all the troubling settings that people were living in. To stir interest, Riis learned that photography was very powerful and made readers reflect and think.

The article then goes on to talk about actual photography. Photography was relatively new at the time but still detailed an image much more effectively than would a painting or drawing. Photographs at the time were very bland. They only recorded what was there. The camera was given the nickname, “the mirror with a memory.” People who viewed a photograph were occasionally not able to see any aesthetically pleasing images. Later on, developments were made and cameras that were previously large became smaller and more portable. An example is the Kodak camera that shot higher quality shots.

Riis’s goal was not to make pretty pictures. He used a primitive camera and his photos came out bleak compared to those from newer cameras. The picture called “Five Cents a Spot” on page 184 exemplifies this. The picture is clearly artless and bland. However, Riis liked that it showed the true setting. Virtually all photographers at the time had bias, and even Riis was included. Their shots were shot to make it as selective as possible to the photographer. The article goes on to give examples like Matthew Brady who dragged dead bodies in Civil War battlefields to make his picture more, picturesque. The authors tell the reader that a picture must be interpreted like an essay or piece of writing. The motive and goal of the author or photographer must be figured out.

Riis wrote about different ethnic groups when he was living in New York. He wrote about greedy Jews, drunken Irish, and sloppy Italians. Riis also wrote with Christian morality. He blamed the faults of the above mentioned people on the poor living conditions that they were in. Like any other photographer or author, Riis’s motive must be figured out. It was already clear that he wanted change for the slums but in his pictures, the authors of the passage describe some pictures having Riis’s Christian morality in play.

Riis highlights the needs for stable, wholesome families. The picture of page 191 is an example of a non-wholesome family. The home is supposed to be a resting place but factory work made its way into the home, making the entire family work. Photos like these were examples of Riis’s motives behind his photos. The photo on page 193 called “Room in a tenement flat” showed a family portrait. The room that they were in was very crammed and Riis again shows a family in poor living conditions. Riis also photographed many children, like the ones in “street arabs” on page 195. The photo is heart wrenching and captivates any viewer because of the pitiful place they had to sleep in.

Although Riis’s photos weren’t artistic in any way, he effectively conveyed and showed the harsh, unforgiving lifestyle that families and individuals lived in. By using the “mirror with a memory,” Riis was able to actually bring change for the better in the slums and reach his goal. He also proved that pictures really do tell the truth, and that the truth must be uncovered.

“The Mirror with a Memory” by James West Davidson. (2016, Nov 24). Retrieved from https://studymoose.com/the-mirror-with-a-memory-by-james-west-davidson-essay 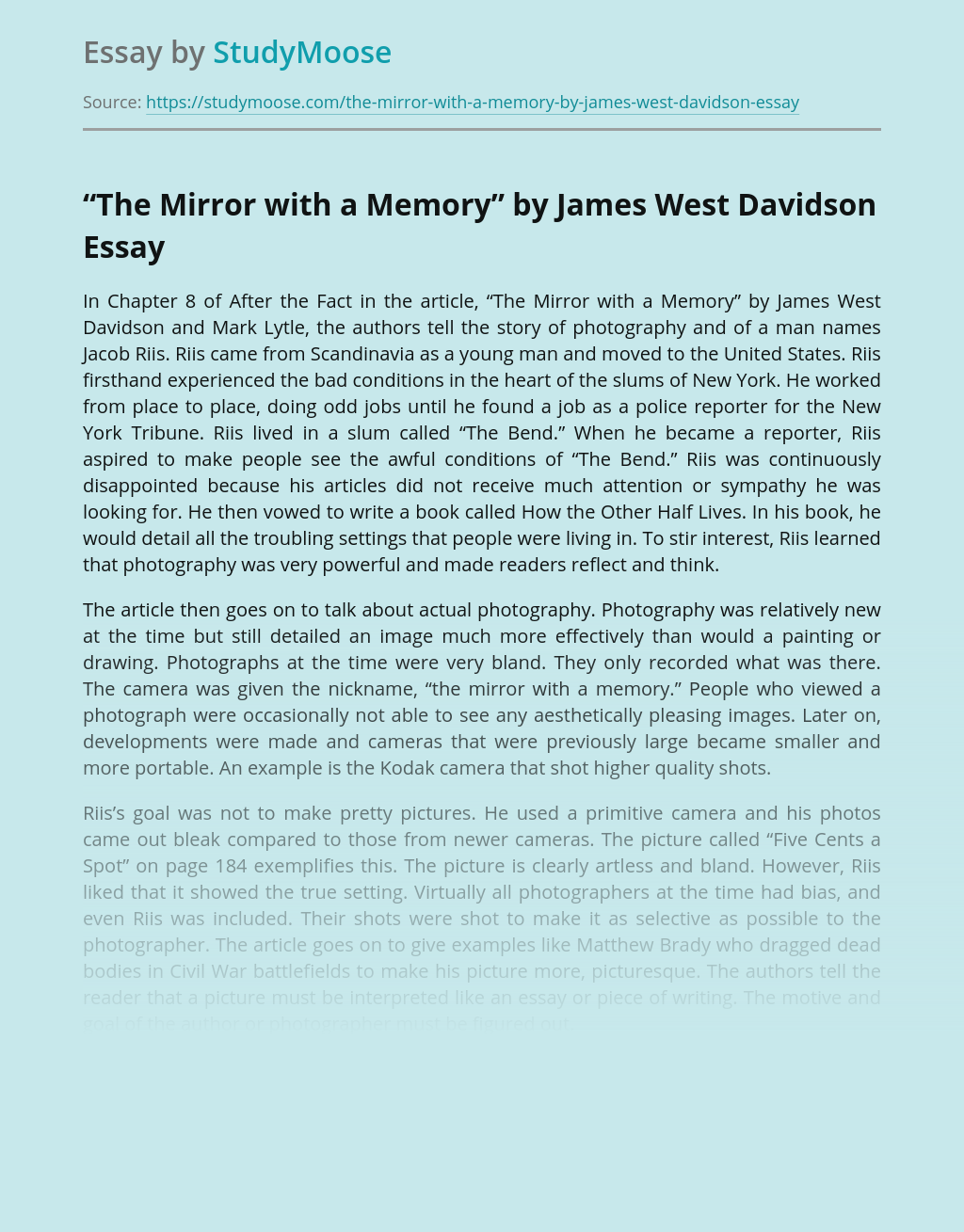 “The Mirror with a Memory” by James West Davidson

In Chapter 8 of After the Fact in the article, “The Mirror with a Memory” by James West Davidson and Mark Lytle, the authors tell the story of photography and of a man names Jacob Riis. Riis came from Scandinavia as a young man and moved to the United States. Riis firsthand experienced the bad...

The core exhibition will be based on the work of two chosen photographers due to the inability to investigate a larger number , this is because they are too many and wide spread that an attempt to look at all of them would be almost impossible , costly and time consuming. The programme will show...

My great-grandmother, who is ninety-five years old, recently sent me a photograph of herself that I had never seen before. While cleaning out the attic of her Florida home, she came across a studio portrait she had taken about a year before she married my great-grandfather. This picture of my great-grandmother as a twenty-year-old girl...

Virtuous decisions of photographers Publishing photographs that show personal tragedy and are questionable in their moral standards with those concerning privacy and those about inflicting additional harm on victims can be supported by Aristotle’s Virtue Ethics. This should be supported because, as a news organization, photographing what is seen shows the magnitude of the situation...