The Major Themes in the Plays of Rabindra Nath Tagore

The purpose of the present project is a conscientious Endeavour to explore, evaluate and establish the greatness of Tagore’s genius in the literary world that has long been a subject of interrogation and negligence. Tagore made major contribution in the realm of English novel, poetry, drama, music, painting, poetics and philosophy. His inspired genius and comprehensive vision surpassed the barriers of languages and traditions to seek its outlet through various forties, languages and patterns. Whatever, mode and form fascinated his creative sensibility but his widespread humanity and inherent poetic creed reigned supreme.

Don't use plagiarized sources. Get your custom essay on
“ The Major Themes in the Plays of Rabindra Nath Tagore ”
Get custom paper
NEW! smart matching with writer

With the honour of Noble Prize, he was universally acknowledged as a poet but it had been a weakness of the critics of Tagore that they had paid no heed to his dramatic genius and tried to evaluate him on the basis of canons laid down by Aristotle and followed by Shakespeare and other dramatics of Elizabethan Age. However, the fact is obvious that genius has its own alchemy beyond and above the periphery of tradition, with the change of social ethos, literary tradition also seek modification to suit the demands of Society of which literature is a verbal presentation.

Rabindra Nath Tagore was one of those Thinkers who did not adhere to any tradition but carved out his own way to make a tradition for the future generation. Tagore, in his life time, produced more than forty pieces that can be placed in the category of drama. Some of them are written in English, others are translated by other writers while a large group of them have been translated by Tagore himself with greater consummate skill of an artist.

If drama is a representation of an ‘action’, it certainly entitles him to be included among the major dramatist of the world.

In Tagore’s dramatic sensibility, there is variety abundance stretching from Romantic comedies based on Elizabethan models to poignant tragedies, forces, satires, dramatic dialogues, symbolic plays, plays having metaphysical content, plays of protest against social and political injustice containing deep reflections on human reactions and ethical prolems of human existence. For Tagore, drama was not passing phase of his literary Car but an integral aspect of his creative sensibility and therefore there is a close similarity in his dramatic vision and the vision reflected through poetry and novel.

In his biography ‘Reminiscences’ he observes that ‘Praktier Pratisodh’ may be looked upon as an introduction to the whole of my future literary work or rather this has been the subject on which all writings have dwelt – the joy of attaining the infinite within the finite. Hence, the fact is obvious that Tagore successfully expressed through his plays “the inner conflict of soul” Drama, no doubt, flourishes through its support from theatre. The history of drama is a witness to the fact that is always been dependent on the stage for its development.

Bengali drama owes its origin almost entirely to western influence. Yet, Tagore without a doubt remained aloof from Bengali stage and carried little for drama by him to be put on the commercial Bengali Stage. He preferred to stage his plays himself and in doing so, he created distinctive stage that is now associated with his name, evolving an altogether new tradition in theatrical production. He even did not care for theatrical movement of Bengal but exercised considerable influence on Bengali drama. He wrote his plays to be staged privately at Shantiniketan.

In exploration of new world of thoughts and experience in his dramas, he was led to experiment with new technique in dramaturgy, naturalism, realism, symbolism and expressionism. His prime thrust was to explore the inner conflict of soul and therefore an extensive use of symbolism has enriched his theatrical art. Since, his plays are vehicle of thought; they explicitly reveal him as a great man and profound thinkers than a perfect stage artist.

Tagore, as a thinker and artist felt a compulsive urge for the search of new values and this recording is most oignant in his dramas. His focus remains on the conflict of ideas and it is the fundamental spirit of dramatic creed in English literature. Hence, Tagore’s dramatic corpse has been a living manifestation of the expression of higher human values reflecting on Indian life and sensitivity involving a wide range of suggestive symbols, variety of theme and technique containing his poetic sensibility of immense humanity with a variety of presentation that can further bring a greater appreciation and prestige to this “Rabi” of Modern India.

The Major Themes in the Plays of Rabindra Nath Tagore. (2016, Dec 09). Retrieved from https://studymoose.com/the-major-themes-in-the-plays-of-rabindra-nath-tagore-essay 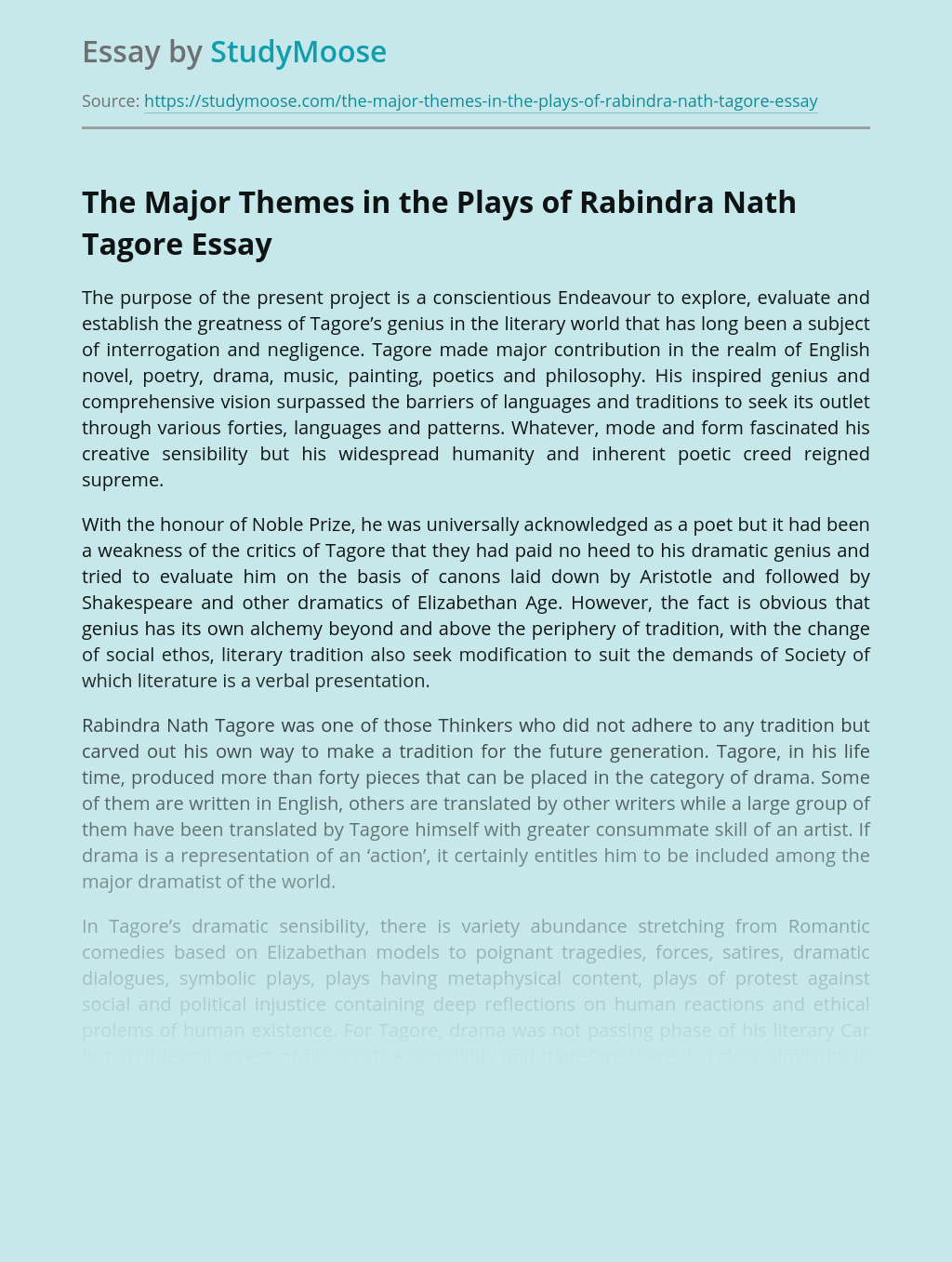