The main characteristics and structure of the Acts of the Apostles

The Acts of the Apostles is the fifth book of the New Testament which outlines the events of ‘Apostolic Age’ of Christianity. Within the book, there is a definite structure behind it with reoccurring and consistent themes and characteristics that continually appearing throughout it.

In terms of the structure of the book, there are three consistent themes which consistently appear and develop throughout Acts as the Apostles progress through the journey.

Don’t waste time
Get a verified writer to help you with The main characteristics and structure of the Acts of the Apostles
Hire verified writer
$35.80 for a 2-page paper

The themes I refer to are geographical, biographical and theological.

The geographical theme is first made evident by Jesus’s final command before he ascended into heaven, in 1:8 of Acts. Jesus said “you will receive power when the Holy Spirit comes on you; and you will be my witnesses in Jerusalem, and in all Judea and Samaria, and to the ends of the earth.” The book of Acts then proceeds to tell the story, where the events fulfil this prophecy and the actual book could be divided into sections based on what Jesus said.

From the start of the book until chapter 6, the Apostles are situated “in Jerusalem” and from then to chapter 12 is the story of how the Apostles fled Jerusalem and went out to “Judea and Samaria”. From Chapter 12 onwards chronicles the missionary journeys and the road to Rome, which was considered by many to be “the ends of the earth” at the time.

The biographical theme is one that has caused many of scholars to dispute the title of the book, for although the book is titled “Acts of the Apostles”, the book mainly centres around two figures.

The first figure would be Peter, one of the original twelve and a Jewish convert whom represented the traditional early Christians who maintained their Jewish traits. The first part of Acts focused on him and his leadership in getting the Church started up. The other figure would be Paul, a former member of the Sanhedrin who persecuted the Church before being converted and becoming a missionary spreading the message to the Gentiles throughout Asia, Europe and to Rome.

The theological theme is shown through the spread of the message and the expansion of the Church to include the Gentiles and how such a move caused such controversy and concern amongst the early Christians. In the book, Luke ensures to include all details which state that Gentiles should be allowed to convert so as to solve the problem, for even if the speeches included in the book were not successful, the content was of importance, and thus view is upheld by scholars such as Fernando.

Also in Acts are a number of characteristics that are ever-present in most, if not all stories within the book. The Holy Spirit, baptism, opposition, universalism, miracles and prayer, it is generally agreed by scholars and can be seen by most, that these features are often integrated somehow into the stories.

The Holy Spirit is the most common reoccurring characteristic present in the book of Acts, and also one that is existent in Luke’s Gospel and shows the connection between his Gospel and Acts. As said by the scholar Guthrie, “God is seen to be active in the early Church through the Spirit’s power”. The Holy Spirit was a promised gift from Jesus and is shown to have much effect when it came into one’s life. On Pentecost, the spirit is shown to have changed the Apostles from being scared and in hiding, to being open and speaking out proudly of their religion, particularly Peter, who became a fearless and insightful leader. It also changed Paul from being one of the persecutors to being one of the persecuted. The general message is that if one accepts the message with enthusiasm, the spirit would change their life, with an example of this being the Crippled Beggar as well.

Another common characteristic of the book is the sacrament of Baptism, as Luke commonly writes that baptism is necessary in order to become a part of the Church, for it is not only symbolic of a change of heart or the washing away of old sins and such, it is supposed to give way for a new life where the Holy Spirit actually lives within a person. This is made clear by Paul when he was in Ephesus in chapter 19.

Opposition is something which also comes up often in the book of Acts, more often than not actually. From Jesus’ time, to the actual beginnings of the Church and all the way to when Paul was in Rome, the Christians were facing persecution from others, namely the Jews. The Sanhedrin arrested numerous Christians and even stoned Stephen to death and Paul is rejected by the Jews in just about every town he enters on his missionary journeys. Despite their numerous attempts to spread the message to everyone, including the Jews – whom Paul always visited first upon entering a town, they continued to shoot it down and reject them.

And that idea of Christians attempting to spread the message to all leads us to the next characteristic and that is, universalism. This is first raised in 1:8 of Acts, as it is said that the message should be spread to all people everywhere, and begins to happen after the Diaspora of the early Christians after Stephen’s death. Philip is the first to break boundaries as he converts Samaritans (essentially a sect of Judaism) and talks to an Ethiopian, however Peter officially accepts the Gentiles into the Church, beginning with Cornelius. Also, Paul is told in a vision to be the one who preached and spread the message to the Gentiles specifically.

Another characteristic which is present throughout the book is the act of Miracles, which as CS Lewis said are “what God writes across the sky in capital letters what he usually writes in small letters everyday”. The point behind them is to make valid the claims that Jesus is indeed the Lord and that his power and presence is still very much alive. An example of a miracle is how Peter healed the crippled beggar, enabling him to jump up and run about.

And the final characteristic of Acts is the importance of prayer in Christianity. Luke uses prayer to emphasise the community aspect of the religion and encourages others to worship in numbers as prayer gives people time to give praise to God, whilst also bringing about fellowship and equality – especially after the division between Jewish and Gentile converts. Paul was seen to have prayed often, such as when he was imprisoned and he prayed and sang hymns which lead to divine intervention as he escaped from the prison.

Overall, one can see that there are many characteristics that the book is based around and that there is a definite structure which really builds up the story.

The main characteristics and structure of the Acts of the Apostles. (2017, Sep 11). Retrieved from http://studymoose.com/the-main-characteristics-and-structure-of-the-acts-of-the-apostles-essay 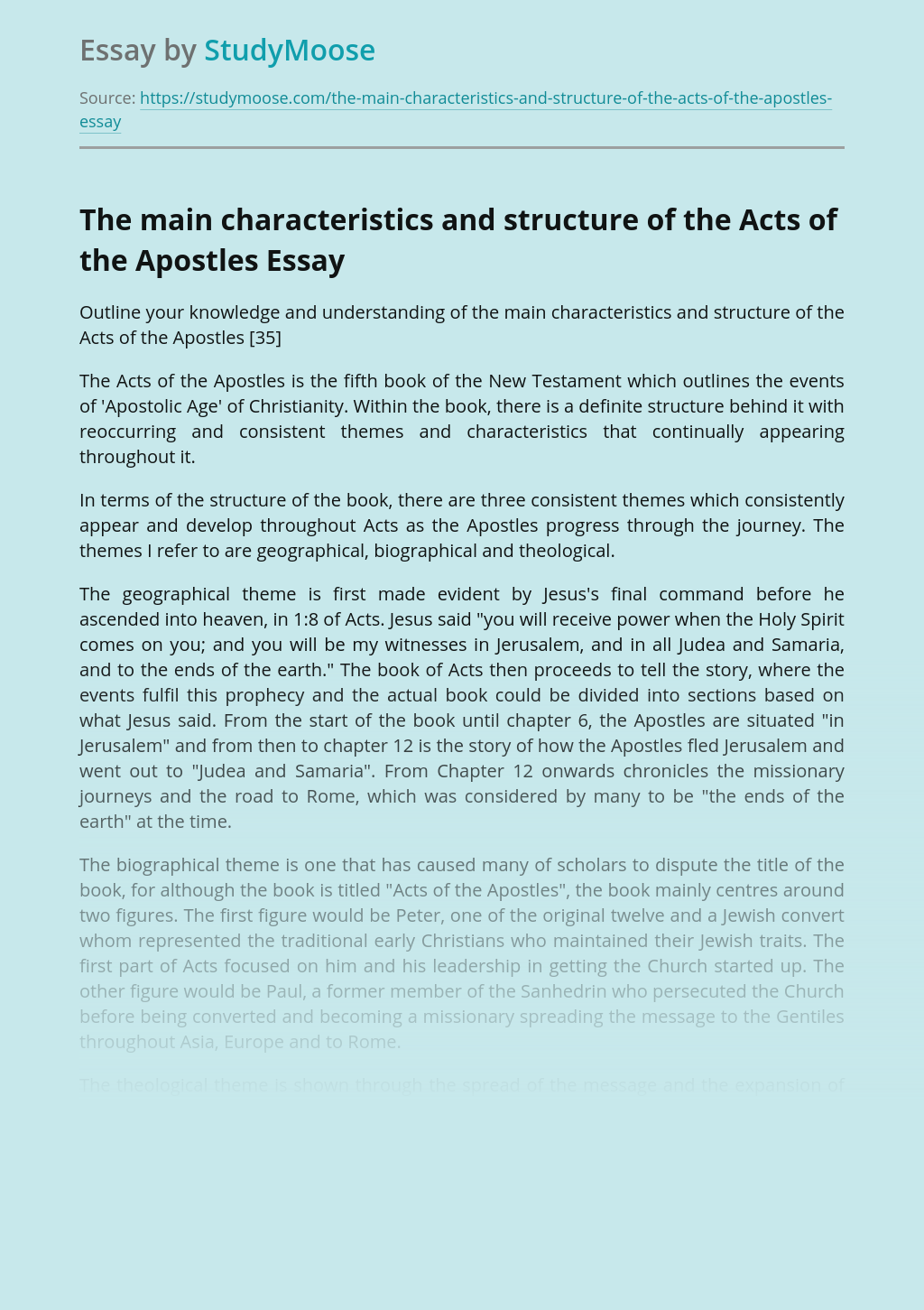 Don’t waste time
Get a verified writer to help you with The main characteristics and structure of the Acts of the Apostles
Hire verified writer
$35.80 for a 2-page paper
Stay Safe, Stay Original