The Lamp At Noon Summary

The Lamp at Noon is an epic short story of Sinclair Ross describing a couple during a great depression. Ellen has a young child while Paul is working in a drought-ridden farm. Through out the story the couple battles to survive the challenges given to them to live. The use of he and her pertains to the characters Paul and Ellen struggles during the Great Depression they experienced in Saskatchewan. The wild lipless relates to the survival of the two, year after year, in order to stay alive from hunger and meagerness.

Don't use plagiarized sources. Get your custom essay on
“ The Lamp At Noon Summary ”
Get custom paper
NEW! smart matching with writer

In addition, the wind reflects the harsh elements they’ve encountered and their incapability to survive in the changing environment. In particular, the passage tells how Ellen fights back in conditions where they were deprived of growing of crops, harvest, and a living. Ellen is still waiting for Paul to come back with her. The use of simile, metaphor and personification in the passage makes the passage complex, reflects the relationships between couple struggling for a living (The Lamp at Noon Setting).

The image that I retained is the state of mind of the author and his attitude which reflects a pattern of seclusion and/or loneliness in the harsh conditions of the environment. The character of the wind may reflect to drought and storms to Ellen and Paul. The personification of wind strengthens the condition of life of the couple. The image of Ellen was fragmented to show her loneliness and suffering. Referring Ellen to a woman describes not as a central dogma between her and Paul.

Her eyes and those of the horses implies a separation between them (Ellen and Paul) Through out the passage the flow of the story deals continuously with desperation, seclusion, loneliness, and survival. It is shown in the feelings of Ellen, where she wants Paul to come back. She wants nearness to Paul and wants for them to be re-united. In this way, she will feel safe from anything (Jussila, 2009). The theme is conveyed through the changing conditions or the harsh environments as the story progresses. It is shown in a number of ways, in example, the wind that is always raging to them.

The hopelessness of Ellen and Paul’s condition was serious in nature. Their despair made it real. Also, during the Great Depression, the situation of the couple was similar to real life. In the passage, the author used parallelism and repetition. The feelings of despair and worthlessness are some of the emotions that were repetitively portrayed. The setting of chaos and atmosphere of hopelessness set up the dramatic story of Ellen and Paul’s. The bankruptcy of their farm, failed crops, and sandstorms deepen their needs for survival.

In the passage, there is no alliteration that was observed. Conversely, assonance/consonance was observed. The line the creak of walls and seemed-scream are some of the instances where there is sound similarity recognized. In addition, there were imitation of sound in words (onomatopoeia) for example; “Creak” and “wailing” could be seen as onomatopoeia (Lesk, 2005). I would say the author used abstract and colloquial forms of words in the passage (The Lamp at Noon). There were more monosyllabic words than polysyllabic words. The author used more adjectives and verbs and pronouns.

In the passage, him, her, creak, and lipless are some the words that the author always writes. The sentences used were longer than the normal sentences written in other passages. Also, the type of sentences written was more of complex sentences. In the passage, I’ve identified many subordinate clauses that were dependent. Most of the sentences are incomplete (e. g. staring into the livid face before him). Many of them are link by conjunctions and/or commas. The sentence structure use by Ross effect on how he grabbed a reader’s attention and effect on the reader’s capability to know which piece of information is relevant.

In any of the stories we have read, there is always light from the dark. And, when we encounter serious problems in life, let us be remembered to know that there are solutions from it.

The Lamp At Noon Summary. (2016, Oct 27). Retrieved from https://studymoose.com/the-lamp-at-noon-summary-essay 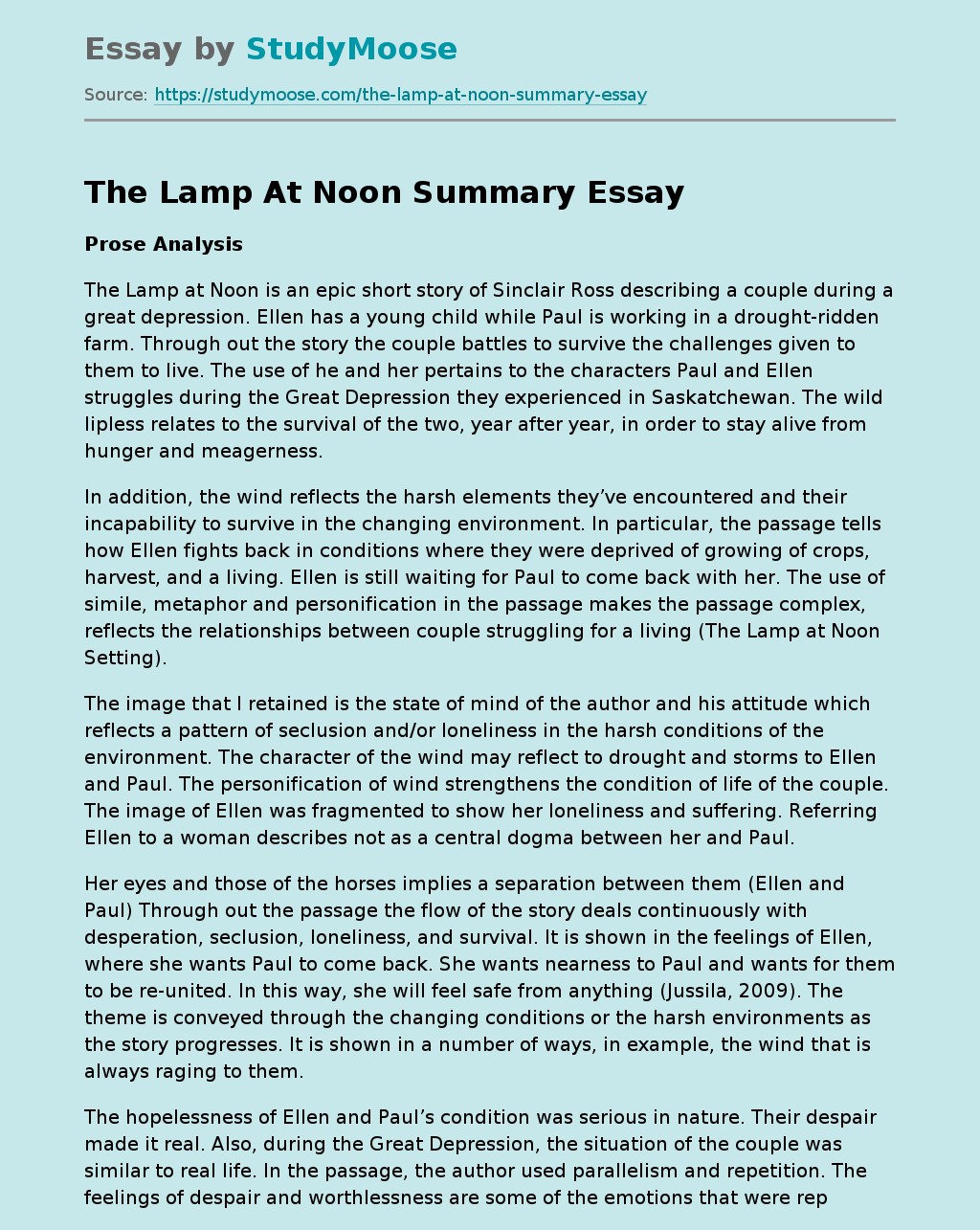