The Just Versus Unjust

Henry David Thoreau, Martin Luther King, Jr., and Sophocles were three men who tried to show the world that unjust laws hurt all of society, and all three tried what they thought would be the remedy to such injustice.  King even gave his life to the cause of overcoming unjust laws.  I feel that all of them made good points and should be remembered for their great works, but I think that Antigone by Sophocles is the most effective because she actually gives her life for the cause that she feels is unjust.

Don't use plagiarized sources. Get your custom essay on
“ The Just Versus Unjust ”
Get custom paper
NEW! smart matching with writer

From the start of the play, Antigone states that she will die young.

Antigone’s brother, Polynices            , has been killed while at war with his brother for the controlling power of Thebes.  Creon, Antigone’s uncle and now the king of Thebes, has decreed that Polynices cannot have a burial, unlike his brother, Eteocles.

His body must lie out in the open where the birds and the elements take a toll on his remains, and anyone who tries to burry him will be stoned.  Antigone is distraught, not only because of her brother’s death, but by this dishonorable deed decree which is now law.  Therefore she knows from the start that she will receive the ultimate punishment for what she knows that she has to do.  As Antigone explained to her sister, Ismene, while trying to convince her that she should also help with the burial, she must answer to higher powers than the king.

This is much like Dr. Martin Luther King’s philosophy.

But more basically, I am in Birmingham because injustice is here. Just as the prophets of the eighth century B.C. left their villages and carried their “thus saith the Lord” far beyond the boundaries of their home towns, and just as the Apostle Paul left his village of Tarsus and carried the gospel of Jesus Christ to the far corners of the Greco-Roman world, so am I. compelled to carry the gospel of freedom beyond my own home town. Like Paul, I must constantly respond to the Macedonian call for aid. (King)

Antigone and King suffered from injustices bestowed on them by birth.  Antigone was the daughter of Oedipus and Jocasta, who were not only man and wife, but mother and son.  She was cursed at birth for the atrocity of her parent’s sin.  King was born an African American during the time when prejudice was at the heart of the moral fiber in southern America.  They could not escape their trials.  Henry David Thoreau was born into privilege.  The few sufferings he endured were self imposed.  That does not mean that he was less of an honorable man.  He did choose to stand up for the injustice he saw in the laws of the land.

He had never been a slave, and yet he went to jail because he refused to pay taxes to a government that would uphold the hideous institution of slavery.  Like Antigone, he made a conscious decision to break the law that he knew in his heart to be unjust.  If others pay the tax which is demanded of me, from a sympathy with the State, they do but what they have already done in their own case, or rather they abet injustice to a greater extent than the State requires. If they pay the tax from a mistaken interest in the individual taxed, to save his property, or prevent his going to jail, it is because they have not considered wisely how far they let their private feelings interfere with the public good. (Thoreau)

Antigone, despite the order from her king, uncle, and future father-in-law, decides to give her brother an honorable burial even though her Ismene has declined to help her and to obey the law.  When it is discovered by Creon who the culprit of this crime is, she willingly admits to what she has done as do King and Thoreau when they are charged for their unjust crimes.  The major difference is that Antigone will face certain death.  She sees this as an act of love. There is no baseness in the act which shows our reverence for our kindred.(Ll. 564-5)

King was martyred for his beliefs, however, he did not know with certainty that would be the outcome.   Thoreau knew that jail was inevitable, but death was never an issue.

Creon, after a fight with his son, decides not to stone Antigone, but to entomb her alive so that she will suffer a slow death.  This sentence is unjust because she only buried her brother.  Creon does not see it as only a burial, but as a treasonous act because she has broken his law.  With all societies, the reason for the punishment of a crime is not for justice, but to make an example of the condemned and to strike fear in all who would seek to follow that same course.

Antigone willingly takes her punishment.  She is adamant that her sister, Ismene, will not suffer the same fate as Creon has declared, not because she is concerned for Ismene’s well being, but she feels that Ismene does not deserve to die a martyr’s death since she did not help Antigone in the burial.  Creon decides to spare Ismene, and Antigone readily accepts her fate.

When the soothsayer of Thebes, warns Creon of the wrath from the gods that he will bring down on Thebes, he refuses to listen, and instead curses the old man.  He truly does not want to hear that he might not be in the right.  Many times in today’s society leaders are the same way.  They would rather go down and take a country down with them than admit that they were wrong.

Creon, out of fear, orders that Antigone be released.  The sentry return only to tell him that Antigone has killed herself by hanging and that Haemon was also in the tomb mourning her.  Creon goes to the tomb himself and finds Haemon wailing about Antigone’s death.  He strikes at his father, but misses.  Then he turns the sword on himself and takes his own life.  Eurydice, Creon’s wife and Haemon’s mother, hears of her son’s suicide and stabs herself.  Creon is then told of his wife’s suicide and her body is brought before him.  He is so grief stricken that he prays for death.

There are two major themes in Antigone as well as several minor ones.  One of the themes is that when an unjust law is permitted to exist, there are tragic results for all of the citizens of that society.  Many will pay the price for the atrocity.  Millions of slaves paid the price of slavery while thousands paid the ultimate price for civil rights in the nineteen sixties.  The other major theme is that it takes a brave soul to turn around the injustices of the law.  Antigone paid for the wrong done to her brother, but she also brought forth the sympathy of the citizens of Thebes.

This gave them courage in the face of adversity.  Thoreau had only a few followers when he introduced the idea of civil disobedience but it has survived the test of time.  Since it was first published, numerous individuals and groups have looked to his teaching as an example of making their voice heard.  Of course King’s work brought the idea for civil rights for all people to the forefront.  The freedoms that all Americans hold dear today are possible in part because of his actions.

All three men, Thoreau, King, and Sophocles left their mark on the world when it came to resistance to unjust laws of society.  Over time they have inspired many to do the same.  Sometimes these ideas have been met with success, and other times they have been unsuccessful.  However, when a life is lost for a cause, the results are eternal and it is hard for the martyr to be forgotten.  That is why Antigone is the most effective example as the response to the unjust law.

The Just Versus Unjust. (2017, Apr 01). Retrieved from https://studymoose.com/the-just-versus-unjust-essay 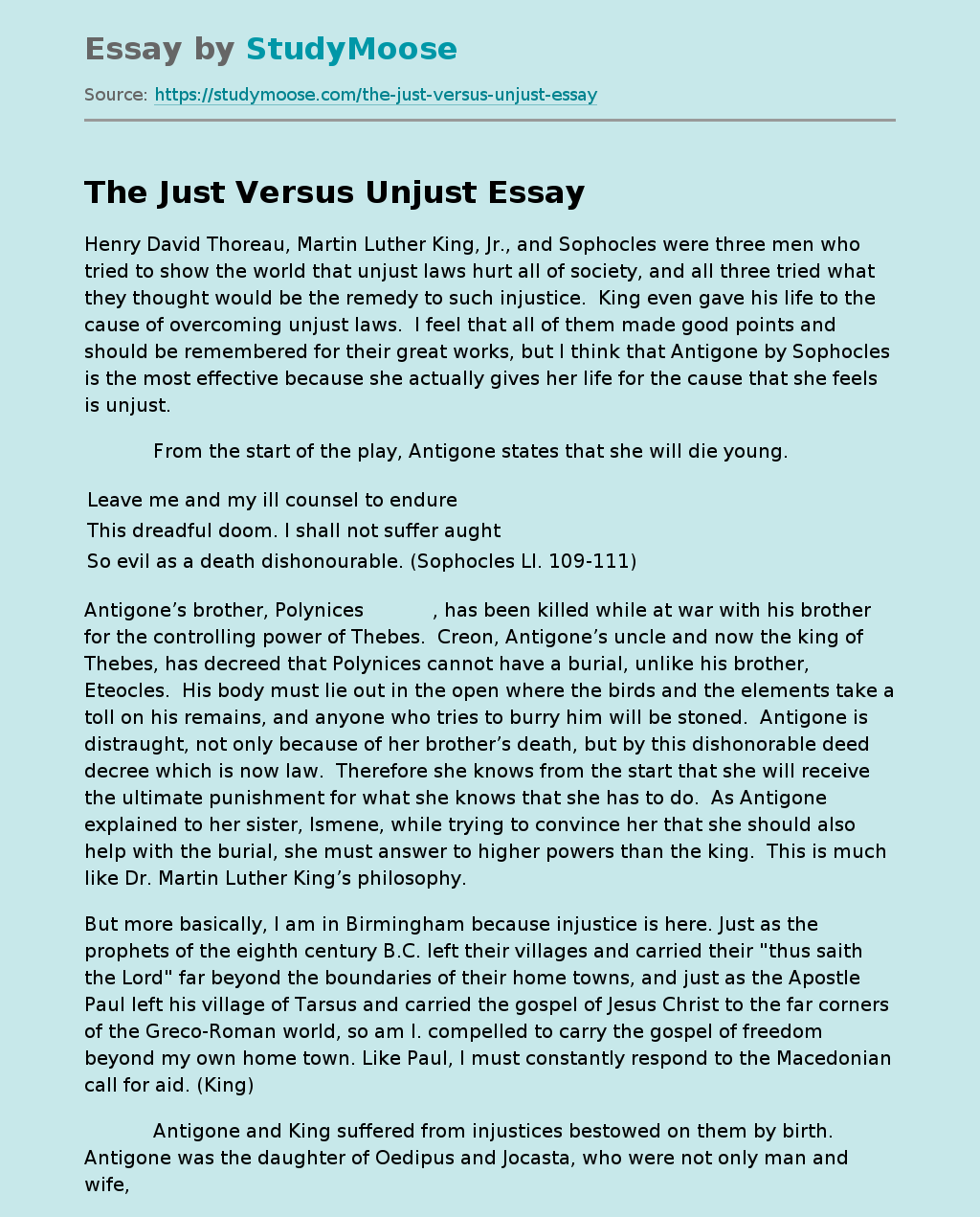