The Indian Aviation industry came to an absolute standstill, after the fall of Jet Airways, almost 40% of the market had completely stopped, airlines were starting to see profits because of the decline of a major airline. IndiGo to get a new aircraft every nine days. The Indian aviation industry saw a huge rise in revenue once IndiGo started its service. After the latest order of 250 aircraft, placed in 2014, IndiGo Airlines will get a new aircraft’s delivery every nine days till 202, which will raise it’s fleet size to 530 aircraft, compromising of mainly A320’s and many A320 NEO’s.

Don't use plagiarized sources. Get your custom essay on
“ The Indian Aviation Industry ”
Get custom paper
NEW! smart matching with writer

They also plan to change their flight schedule and interior of the aircraft to better equip them for the longer international flights, especially because after the decline of Jet Airways, they plan to operate the slot to London Heathrow, starting mid-2020.

This company was chosen because it is seeking globalization at a large scale and also changes to expand its fleet and further widening its horizon and adding more destinations.

Now moving on to doing a SWOT analysis of IndiGo, we get to know a lot more about its globalization objectives. Briefly talking about SWOT, it means – Strengths, Weaknesses, Opportunities, Threats

Now, the strengths of IndiGo will be discussed in the following points:

Now, the weaknesses of IndiGo will be discussed in the following points:

These points, affect the stakeholder group of the employees of the company, it does not benefit the employees since the flight crew and ground staff are usually overworked to cope with the growing demand in volume and so that the company can sustain its profits. In a recent article dated on 14th February, 2019 claimed that IndiGo canceled over a hundred of their flights since Pilots and Cabin Crew were reporting sick due to the hectic load of work volume.

Now, the opportunities for IndiGo Airlines will be discussed below:

This, in turn, benefits the stakeholder group of the consumers, because they will get to travel to international and domestic destinations easily, efficiently, quickly, and much more safely. Even people living in smaller cities will benefit because IndiGo aims at connecting smaller cities to more metropolitan cities and maybe even a few international cities. To finally complete the SWOT analysis, we do not mention the

Threats that IndiGo faces, the first one being :

In conclusion, IndiGo Airlines benefits the consumers and owners to a good extent but does not benefit the employees in certain cases, although the airline has strong components in all 4 sections of the SWOT analysis and after taking all the factors into account, the impact of change and globalization on IndiGo Airlines will benefit the growth of the company immensely by exposing it to bigger and better opportunities in the future, after further reflecting on the case study and the preparation involved, I was surprised how much I have learned about both the change and globalization aspect of a company and the company itself,

Essay on Demand • Essay about Competition 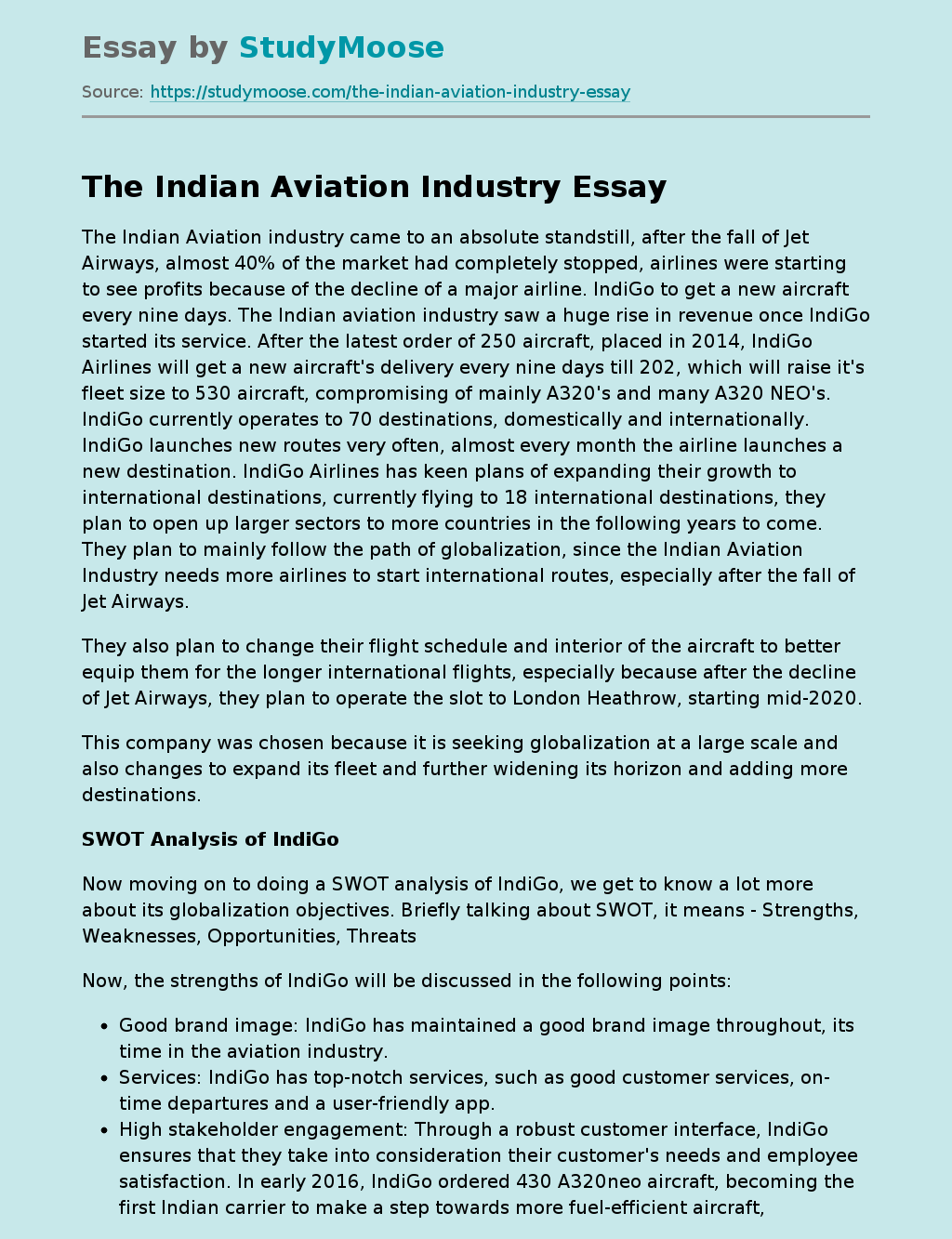