The importance of reflective practice in social work

Reflective practice has been demonstrated to have significant benefits when it comes to the delivery of client-centred care, and can help a social worker to ensure that he is able to accurately assess the needs of each client as an individual rather than as a case number to be merely assigned to a particular program of action.

Don't use plagiarized sources.
Get Your Custom Essay on The importance of reflective practice in social work Just from $13,9/Page

One of the reasons why reflective practice is so important for social workers is that no amount of training can completely prepare a social worker for the requirements of their profession over the course of their entire career.

For example, the context of a client’s problem in one decade will almost certainly be very different in another, which means that the client will need to have access to a social worker whose particular experience can take into account this new context.

Meanwhile the social worker might be stuck in a set of processes and routines from a decade ago (or further back), which means that the social worker will either be unable to help the client or, worse, will attempt to impose an outdated and ultimately useless set of rules that might even cause more damage than they resolve.

Because of the need to reflect on personal performance and practice, self-reflective practice is strongly linked to the need to be able to develop skills for self criticism. Constructive criticism is established as a means by which a social worker can address personal and professional failings and find ways to deal with them. Since it is widely accepted that no social worker can be entirely perfect, this type of constructive criticism can be used to identify weaknesses and either neutralise them or deal with them.

As a form of critical theory, reflective practice is one of the most important parts of modern social work and is the primary means by which any social worker can improve his overall performance. Reflective practice can not only make social work more relevant to the particular needs of each client, it can also genuinely improve the social worker’s understanding of theory and how to apply that theory to practical situations.

In general it is often argued by experts that reflective practice is a strong sign of a social worker (or other professional) who views their job not just as a way of getting paid but as a real vocation, and as a role for which they have a high degree of passion. While this generalisation might not always be true, it does seem to be true that in general reflective practice is a sign of both passion and commitment.

The importance of reflective practice in social work. (2016, Dec 11). Retrieved from https://studymoose.com/the-importance-of-reflective-practice-in-social-work-essay 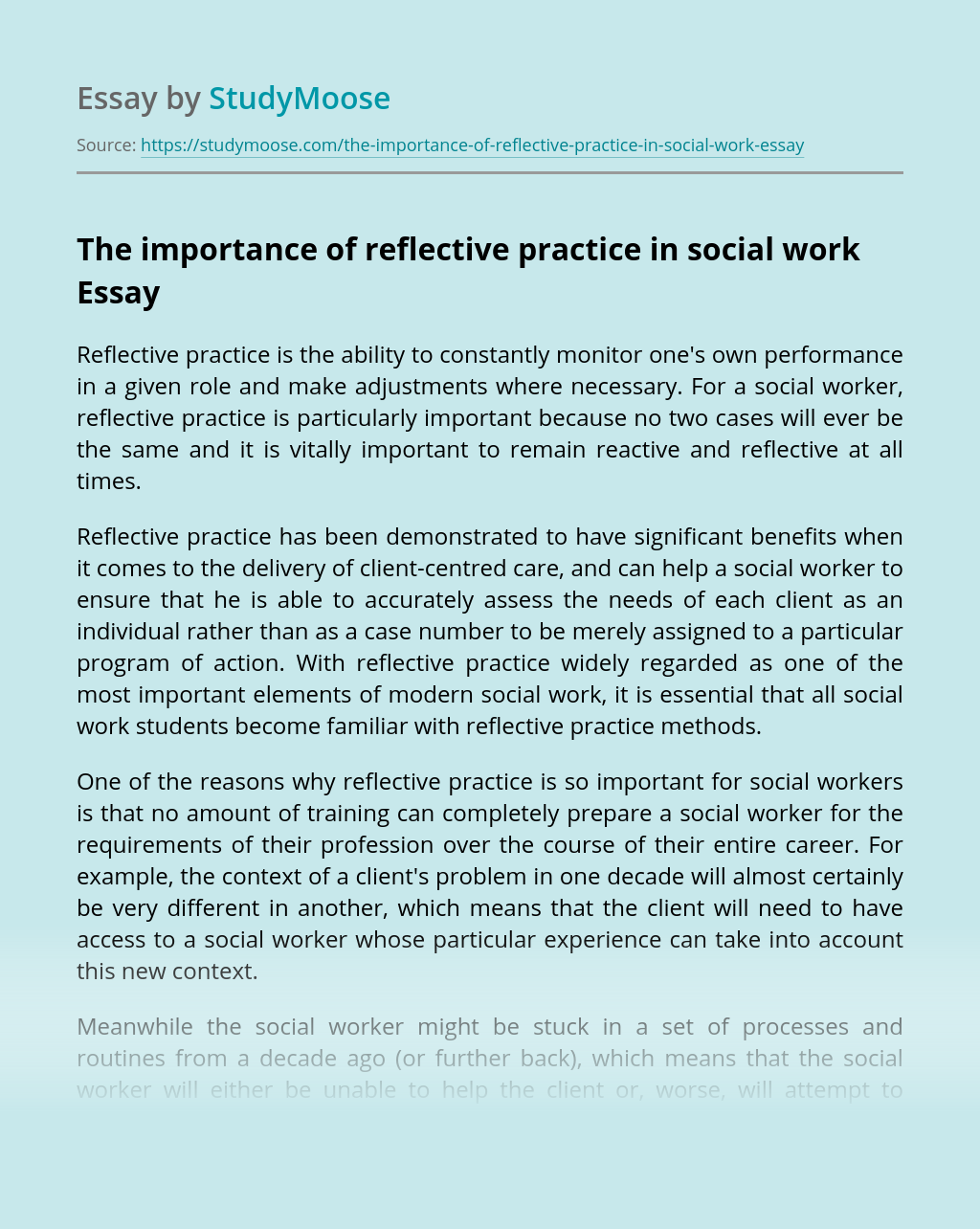 Apple Inc. (previously Apple Computer, Inc. ) is an American multinational corporation that designs and markets consumer electronics, computer software and personal computers. Apple currently has 246 retail stores located in 44 states that employs over 27,000 retail employees. Apple also employs over 304,000 U. S. individuals from development to transportations. As of September 11,...

This tells the audience automatically that when he feels he has no power against his family he tries to prove himself so that he would get recognised for his qualities of being a man. So therefore he proves his ‘manliness’ by showing Rodolpho a few passes of boxing, but really show that he is man...

I remember playing the game Trivial Pursuit and in order to win this game it came down to me acquiring to answer one question. I racked my brain truly hard trying to remember this particular answer. The question inquired about a particular mountain I by no means heard of or could remember learning about. This...

Many researchers, scientists, and environmentalists are expressing concerns about changes in the overall climate of the earth. Some believe that a dramatically dangerous warming is taking place in the overall global climate, a problem that is referred to as “global warming.” This paper will attempt to explore this very issue. Climate is defined as the...

Digital India is a programme to transform India into digital empowered society and knowledge economy. Even though India is known as a powerhouse of software, the availability of electronics government services to citizens is still comparatively low. So this programme has been started by our prime minister Sri Narendra Modi on August 7,2014 to sensitize...