The Importance of Gear Accountability and Retention

Don't use plagiarized sources. Get your custom essay on
“ The Importance of Gear Accountability and Retention ”
Get custom paper
NEW! smart matching with writer

This will allow a Marine to be at ease even while moving or running with serialized gear, knowing that if it comes loose from the pouch or pocket you are carrying them in they will not come completely off your body. The reason you must take the accountability of your gear, serialized or not serialized, is simple, just put it into a scenario.

Say that a Marine loses something small, like his cleaning gear for example. Cleaning gear is easily replaced and not really looked at as super important. But say it were dropped and lost, that Marine now has no way to clean his weapon without borrowing another Marines cleaning gear. No once his weapon gets dirty enough, he has no way to clean it. Then when he needs it most, he can no longer rely on it because it can now succumb to jams. But say you take it into a bigger picture, say that Marine loses a rifle, an M16 to be exact. The enemy, whoever at the time that may be, may have weapons that are not as accurate or advanced as ours.

Now the enemy can reach us from a further distance away, thus taking away the edge we had on them, and possibly Marines lives. All gear that we have, we have for a reason. If we wanted the enemy to have M16s instead of AK 47’s then we would probably give them to them. What about things that we don’t really think about what about “dead” batteries? Many cases have found that most of the IED’s that have been killing US and allied troops have been powered by batteries, that they dropped. Batteries are not exactly gear, but shows how big of an effect a little mistake can make. But you can’t just look out for yourself because it’s usually not the one who loses their equipment that gets killed or wounded; it’s the man to their left and right. Having poor gear retention is not always a mistake that can be stopped.

Gear could be lost in a firefight or raid where you’re doing everything at once, or taken and never given back. But those problems can usually be fixed, because of accountability. Just like a headcount, gear can be counted and eventually found. But that wastes time, and you can easily save that time by not losing or misplacing gear to the best if not better than your abilities. Although dummy cords are useful and easy to get and use, they are not the only means of retaining you gear. Slings work just as good and are often less annoying, and allow you to sling you rifle around your back. Having your rifle on your back keeps your hands free and your rifle retained.

The Importance of Gear Accountability and Retention. (2016, Oct 01). Retrieved from https://studymoose.com/the-importance-of-gear-accountability-and-retention-essay 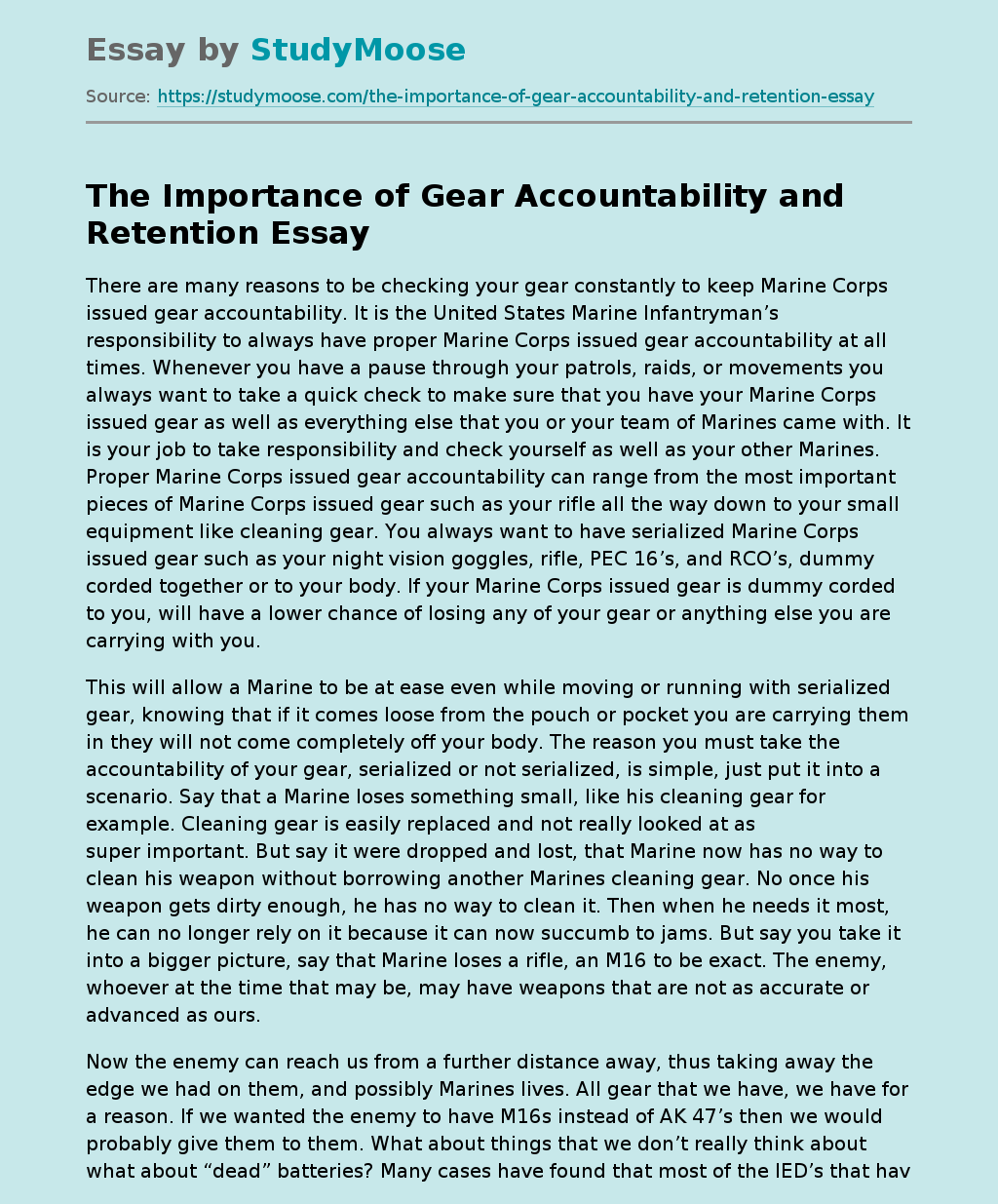