“I never wanted to come on this stupid old hiking trip anyway!” His voice echoed, shrill and panicked, across the narrow canyon. His father stopped, chest heaving with the effort of the climb, and turned to look at the boy.

“This is hard on you, son, I know. But you’ve got to come through with courage and a level head.”

“But I’m scared! I don’t even want to have courage!” he retorted. He jerked his head the other way and wiped his eyes across his arm.

“If not courage, fine,” his father replied sternly. “Then have enough love for your brother to think this through!” He pulled a bandana from his back pocket and tied it around his neck. Then he gently placed his hand on the boy’s shoulder and continued, more softly this time. “Now, I don’t know if I can make it without stopping every so often. And we just don’t have the time to stop.

You’re young, but you’re strong and fast. Do you remember the way back from here to the road, if you had to go alone?”

Jeff flashed back to the agonizing scene of his seventeen-year-old brother at their campsite that morning. He’d been bitten by a snake yesterday during a rough hike through very rocky terrain. By the time they returned to their tents, he was limping badly. Then this morning he couldn’t put on his boots, and the pain seemed to be getting worse.

He needed medical attention right away, so leaving him there was their only choice.

“Jeffrey? Jeffrey, could you do it? Could you make it to the road without me if you had to?”

Jeff blinked and looked past his father’s eyes to the end of the canyon, several miles away. He nodded slowly as the path and the plan began to take hold in his mind. “What was the name of that little town we stopped in to get matches, Dad?”

His father smiled and replied, “Flint. After we left Flint, we parked at the side of the road a few miles out of town. When you see which way our car is facing, you’ll know that the town is back the other direction.”

Jeff thought about this and then nodded. They both drank water and then continued scrambling over the rocks.

Nothing was as pretty as it had seemed when they first hiked this way to their campsite. Before, the boulders and rocks had been an interesting challenge. Now, they were obstacles that threatened their footing and their velocity. Overhanging limbs had earlier been natural curiosities in the cliffs. But now they were nature’s weapons, slapping and scratching the boy and the man who crashed by and pushed through as quickly as they could.

Stone by stone, they made their way up the canyon. Jeff’s father grew smaller and smaller in the distance. “He must be stopping a lot,” Jeff thought. He waved to him from a bend in the canyon wall. His father waved back. Jeff turned and made the final ascent up an easier slope toward the road and spotted his father’s car. He lurched toward it, half stumbling, and leaned on the hood, breathless.

“Can’t stop,” he thought. “Mark’s in big trouble. Gotta keep going.” The fast, loud thudding in his ears was deafening, and as he pulled himself upright, he was surprised as a car sped by, heading toward Flint. “Hey, mister!” he shouted, waving both arms. He began to walk, faster and faster until he was jogging. Then he quickly crossed the highway and broke into a full-speed run, holding his left arm straight out, his thumb up.

His chest was burning with every breath when he suddenly heard several loud honks from behind. He turned as the brakes squealed and saw “Bob’s Towing $#038; Repair, Flint” right behind him. “Jump in, boy! What’s up?” Jeff explained between gasps as the truck picked up speed. The driver reached for his two-way radio as soon as he heard about Mark. “Better get the helicopter in there,” he seemed to be shouting into his hand. But Jeff wasn’t sure about that because everything got fuzzy and then went black and quiet.

Hours later, Jeff opened his eyes to find strange surroundings and his father on a chair nearby.

“What happened?” Jeff asked through a wide yawn. “Where are we?”

“This is a motel room in Flint. You made it into town and sent the helicopter into the canyon after Mark. I can’t tell you how happy I was when I saw it overhead. I’m so proud of you!”

Jeff sat up suddenly. “Where’s Mark? Is he OK?”

“They airlifted him out and got him to the hospital. His leg’s still in bad shape, but he’s going to be just fine in a couple of days. Thanks to you, son.”

Jeff’s worried face relaxed as his father spoke. “How about you, Dad? How did you get out?”

“Well, I finally hiked myself out of that canyon and to the road. I won’t be going back there any time soon. That’s for sure. Anyway, I couldn’t see the car, and as I headed for Flint I got lucky and was able to hitch a ride from a fellow named Bob in a tow truck.”

Jeff laughed out loud. “I guess Bob makes a good living going up and down that road. I hope you gave him a good tip, Dad!” 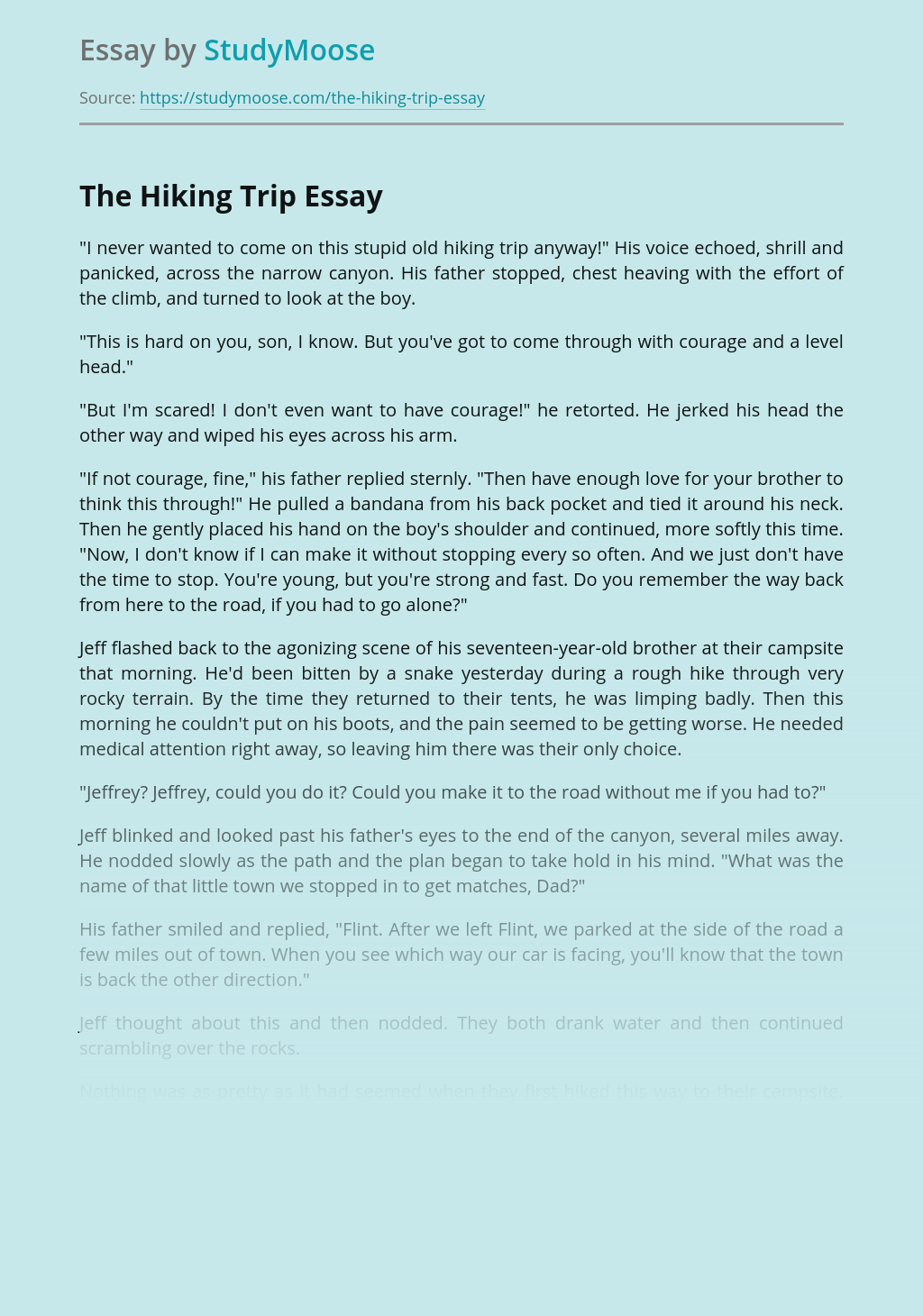