The Happy Prince by Oscar Wilde

Symbolism is the use of symbols to show ideas and qualities by giving them symbolic meanings that are different from their literal meaning. Basically, it is an object representing another to give it an entirely different meaning that is much deeper and more significant. For instance, “smile” is a symbol of friendship. Similarly, the action of someone smiling at you may stand as a symbol of the feeling of affection which that person has for you. Symbols do shift their meanings depending on the context they are used in.

Don't use plagiarized sources. Get your custom essay on
“ The Happy Prince by Oscar Wilde ”
Get custom paper
NEW! smart matching with writer

“A chain”, for example, may stand for “union” as well as “imprisonment”. So, symbolic meaning of an object or an action is understood by when, where and how it is used and it is user dependent. Symbolism is a literary form that is favored by Wilde and it is widely implied in the Happy Prince. So much so, that some of the character itself are symbols such as the swallow. The swallow as seen in the story, have a meeting with its colony in Egypt but it choose to remain with the prince and help him fulfill his wishes until the Prince is satisfied.

This depicts that the swallow is a symbol for loyalty and friendship. The prince lead heart is a form of symbol as well. As learned in the story when all the body parts of the happy prince is melt is heart remain attached. As in, the heart cannot be melted because it is made out of lead. In the symbolic context this is to subtly send the message of immortality to the readers which in one way can be viewed as when one sacrifices their own wealth and happiness for others, they become immortal and this is the symbolism behind the lead heart of the prince that does not melt.

In conclusion, the lead heart can never be melted because the Prince is forever immortal. Other than that, the townspeople are a symbol of repression. Repression is the psychological act of excluding desires and impulses from one’s consciousness. This symbol is used to show the misuse of power and also to represent a form of oppression of people.

In the Happy Prince, the townspeople mainly the council want to get rid of the statue just because it was now dull and not beautiful and use the metal to make a statue of the mayor instead. There is an argument on whose statue should be next at the end of the story and this further instigate that the townspeople are actually a symbol of repression in the story by Oscar Wilde. A controversial symbol is used in the story of the Happy Prince. During the part where the statue is finally fully stripped and its’ lead heart broken into two the swallow requested a kiss to the prince in which the prince replied as “kiss me on the lips, for I love you”. This is where the relationship between the swallow and the Prince has taken a huge step forward as they have crossed the line of that of a friend and now they are in a more loving relationship, almost like lovers.

The controversy is that the prince and the swallow is of the same sex and so the subtle symbols of homosexual love is not very much welcomed in a book written for children but the act of kissing in the lips is certainly a symbol for the love that the both the Prince and the Swallow had for each other. Symbolism can be just one word or in some cases a whole phrase but as far as the story counts the story of the Happy Prince and the Swallow itself a symbolism of the plight that people went through that time, so much so at times only a ruby out of nowhere could end that plight but at the end where the Prince has given all he could yet there are still poverty is a symbol for today’s situation and that poverty can only be cured by the people with power before it is too late.

The Happy Prince by Oscar Wilde. (2016, Sep 22). Retrieved from https://studymoose.com/the-happy-prince-by-oscar-wilde-2-essay 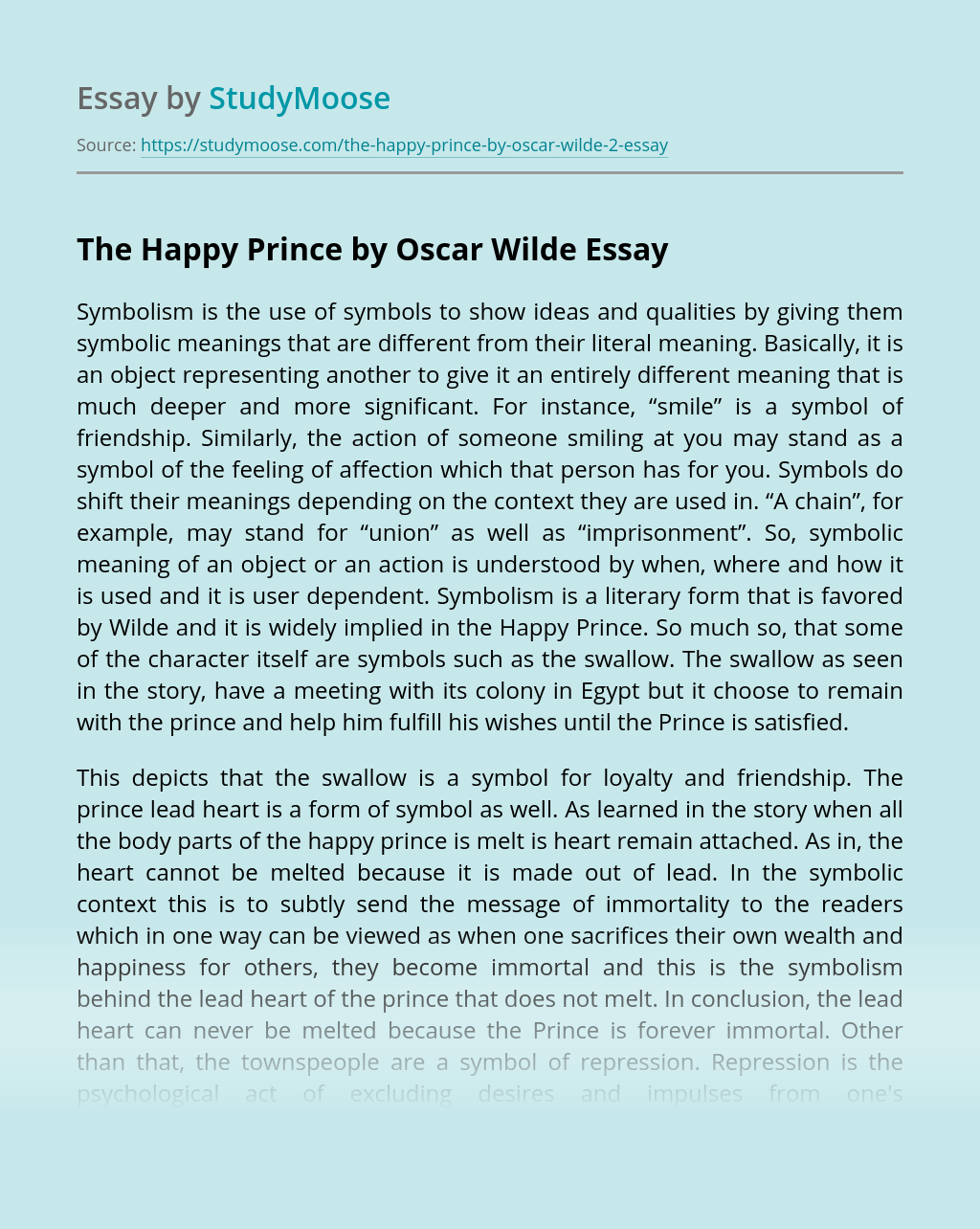