The brief extract given from ‘The Handmaids’s Tale’, manifests the absence of freedom given to them women. The writer uses her stream of consciousness through the first person narrative to depict this atmosphere.

The writer begins the theme of imprisonment, through the description of the objects and the setting in the room.

She uses rather limited descriptive language to create an apparently passive tone. The narrator seems to list or catalog items in an unemotional manner, as if nothing has greater value than anything else: “A chair, a table, a lamp·A window, two white curtains·A bed·Single, mattress medium-hard”.

Don't use plagiarized sources. Get your custom essay on
“ ‘The Handmaids’s Tale’ ”
Get custom paper
NEW! smart matching with writer

The tone and structure of the passage exerts of either restriction of thought or a feel of exhaustion and emptiness within her. Having to observe the same objects every day and night, has created a sense of repetition and a daily schedule for her. In addition, the short monotone sentences echoes her lack of movement body wise, in comparison to her mind which drifts from one area to another in the room. There is emphasis on logical progression, the positioning of objects, as if the eyes of the narrator (and therefore the reader) pans around the room like a camera taking in each component, “on the site ceiling·Under the window·When the window is partly open·on the floor·the wall above·in front of”.

“They’ve removed anything you could tie a rope to”, the first mention of the mysterious “they”, perhaps the people enslaving them to their own needs and wants.

Moreover, the writer implies indirectly with “removed anything you could tie a rope to” in correlation to suicide. This indicates that several women have already ended their lives due to the inhumane treatment the women receive, treated as if they were some sort of object, to use and toss around. The first indication of first person begins in the second paragraph, “I can sit in the chair”, conveys one of the few things that she is allowed to do, as minimal as sitting on a chair. Again, this presents the limited condition these women are living in. “The air can come in and make the curtains move”, presents the contrast between the writer sitting “hands folded” in comparison to the freedom that the air, allowing it to go in and out and “make the curtains move”. Her having her “hands folded” demonstrates the imprisonment in her own body and how closed she must me, as if the writer is physically trapped in some enclosed world, unable to escape. It is saddening to the readers knowing that an inanimate object has greater value in life then these women. “When the window is partly open- it only opens partly”, repetition in “partly open”, asserts and highlights the small and only opening to the world outside, however it is not big enough to escape the hellhole they live in.

Everything that was in the room has been altered by as far as we know are “they”. For instance, the ceiling that has bee “plastered over, like the place in a face where the eye has been taken out”, the simile portrays as chilling image of an object missing, as if the ceiling was disorientated without the chandelier that were once there. “Wood, in narrow strips, highly polished. I can smell the polish”, the writer emphasizes that even with something as natural as wood, “they” had to add their own touch and perception, covering up something that they believe must be done. “No glass, in front of the watercolour picture”, indicates that even with small details such as a glass frame, is removed at all costs, exhibiting how the women are living in extremely controlled conditions. However the only source of nature or an object untouched or unbothered are the “flowers [that] are still allowed”, knowing that flowers won’t harm them nor have the ability to escape.

Throughout the passage, the word “white” repeats multiple times: “white ceiling·two white curtains·same white curtains·flocked white spread”. The colour white is usually associated with purity, which is ironic is terms of what is happening to these women.

Dialoge finally exerts from the first named character in the passage from “Aunt Lydia”. “Think of it as being in the army”, 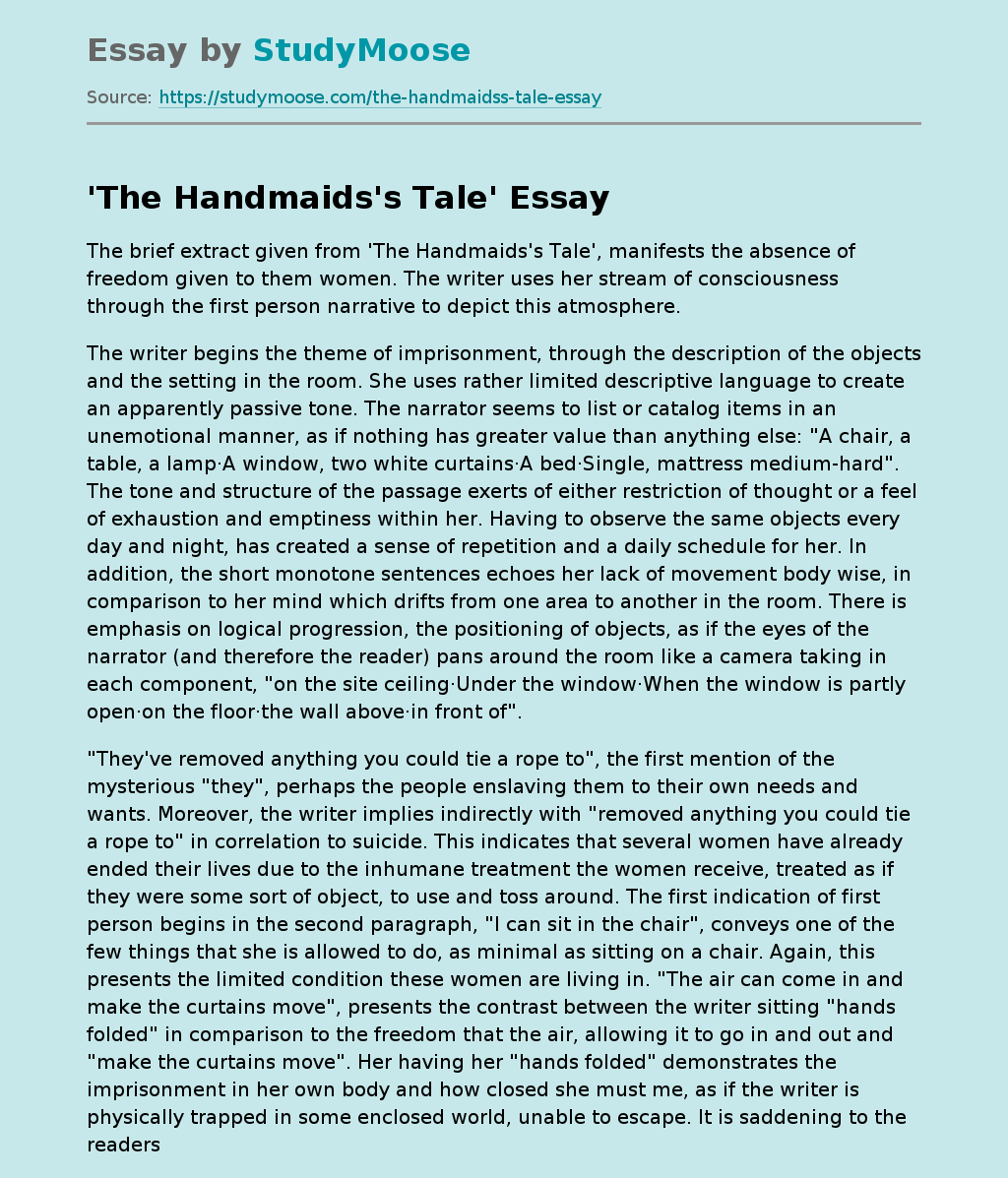