This idea is communicated through a range of characters in the film and a wide variety of verbal and visual techniques were used to show the viewer that although we may not think we are rascist, pressure put upon us can lead to stereotypes being brought to the surface. Haggis sends a clear, powerful message about the way prejudice can impact people’s lives in a big way and that we should judge people by the content of their character, not the coulour if their skin.

Don't use plagiarized sources. Get your custom essay on
“ The film Crash directed by Paul Haggis ”
Get custom paper
NEW! smart matching with writer

Crash is set in modern day Los Angeles, a bustling multicultural city. From the earlier stages of the film it is apparent that racial stereotypes effect greatly the way society works and the different cliques that people fall into. The first time in which this important idea is epressed by director Haggis is during a scene with John Ryan, an officer part of the LAPD and Shaniqua Johnson, the supervisor at the local medical centre.

As Officer Ryan tries to explain the deteriorating health of his father to Shaniqua she becomes more and more unhelpful for what seems like no reason. From this lead up scene, John walks straight from the phone booth and into his patrol car, in which he soon pulls Cameron and Christine over. The lighting during this follow up scene is dull and gloomy with a blue filter; foreshadowing of what is to come. The panning camera angle shows the reversal of power as Cameron is told to step out of the car.

From here, Ryan proceeds to molest Christine in plain sight of Cameron, using his authority as a police officer to keep them both quiet.

At this point it becomes evident to the viewer that had John Ryan not been agitated over his father’s ill-treatment, he would not be acing in the manor in which he was. This demonstrates the way in which people within society can jump to conclusions over who it was that stole their car/robbed their house etc, as they are under a great amount of stress.

Another scene in which Paul Haggis’ important idea is used to show a purpose is during the scene where Farhard attemps to kill Daniel. Due to the stress and grief caused by the robbery of his store, Farhard stereotypes Daniel, a young tattoed hispanic man, as a gangster who has purposefully done a poor job of replacing the locks and thus let their shop be broken into. Halation is used as Farhard steps from his car wielding a gun. The definition of the ‘halo effect’ is this; ‘a potential inaccuracy in observation due to over-generalisation from a limitied amount of evidence of the influence of re-conceived beliefs.’

This conveys to the viewer that although Farhard is acting irrationally at this point in time, he is not a murderer as some might quickly perceive him to be. The use of slow motion and no digestic sound, builds upon the idea that Farhard is not in the right state of mind, focused on one job, unaffected by his surroundings. There is irony within his scene as both Daniel and Farhard are extremely family-orientated men and are both trying to make a living to help them get by. Without the pain caused by the robbery of his store, Farhard would not have acted in the manor that he did.

The final scene in which the idea that anger and stress can manifest themselves as racism is expressed through the shooting of Peter. Hanson, a young policeman is displayed through the majority of the film as a non-racist man with strong morals. However, during this scene, the viewer observes a stark contrast to the man who we met at the start of the film. Leading up to the shooting, Hanson makes one condescending comment after another, without provocation from Peter, a poor African American man.

A low angle shot of Hanson is used to show the power that he seems to hold over Peter, There is also a slight use of hallation, possibly explaining the fact that Hanson is about to do something out of the ordinary for the type of man that he is. At first it seems that Hanson does not have any events that have contributed to a manifesation of stress but the entrance to a heavily racist LAPD is what the viewer can put the killing down to.

In conclusion we can see that in certain situations, under extreme pressure, people can act in very different ways. Racial stereotypessuddenly become apparent and poor decisions are easily made. Throughout the film this important idea is communicated clearly and powerfully through a skillfull array of verbal and visual techniques chosen by director Paul Haggis.

The film Crash directed by Paul Haggis. (2016, May 12). Retrieved from https://studymoose.com/the-film-crash-directed-by-paul-haggis-essay 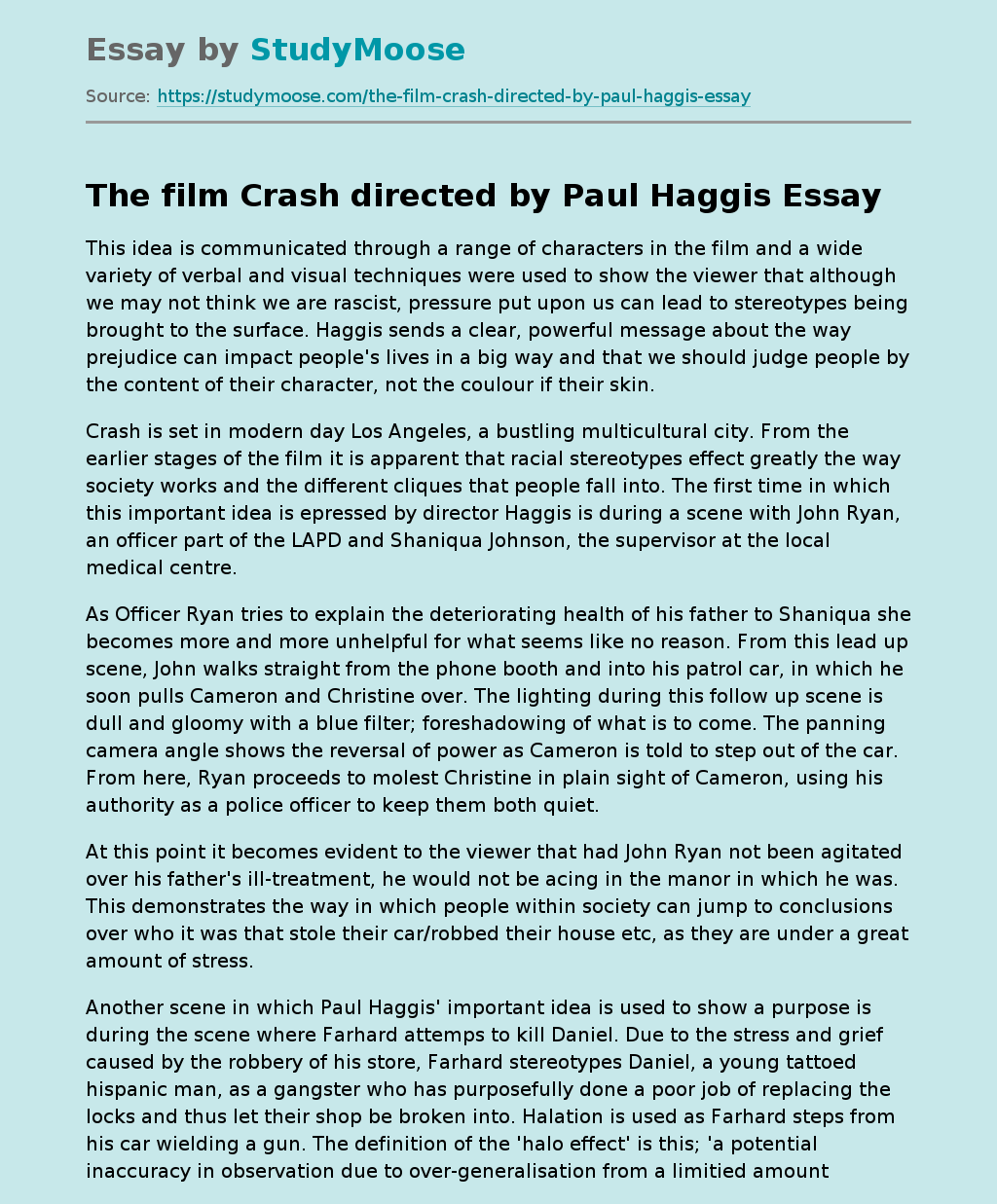