The Experience Of Junior and High School Prom

It was a magical night when the stars descend from heaven and danced the enchanting affair away. All I can see are beautiful faces shining in their marvelous formal attire.

Our JS Promenade was the finest one that we’ve ever had and the Seniors will surely be treasured in the rest of their lives. The engaging event was hosted by very charming and handsome emcees, Patricia Addie Jimenez and Archie Marbella. We started it with the entourage of the princesses accompanied by their partners.

Turn in your highest-quality paper
Get a qualified writer to help you with
“ The Experience Of Junior and High School Prom ”
Get high-quality paper
NEW! AI matching with writers

After, the Doxology of the TLC performing Arts followed by the Tableu was performed. Our BED-Principal, Dr. Rosa D. Anonat was not there, so the Hermana of the Month, Ms. Janet Siayngco gave the Opening Remarks. Followed by the amazing voice of April Taway who sung “My Valentine”, a song fit for the season of the hearts. The most awaited highlight of the promenade was the Cotillion, where the talented dancers show up their struts in the open dance floor.

Their move was worth gazing upon even though one of the members lost her heels and headdress. However, I know they enjoyed it a lot.

After, Betj Jasareno delivered her class prophecy, she has prophesized what they will become in the future. It is fun hearing those prophecies but suddenly` those beautiful professions turned into just a dream. However, that dream turns dark and eyes were seen nothing, when a dim of candle light appeared.

But that wasn’t a dream anymore. As it turns to reality. While each partners were lighting their candles everyone was singing the song “One Little Candle” and it was really amazing because it was totally dark and the candle was the only one which lights up the whole campus especially when they formed a circle and sung the song “Good luck, Good health, God bless you.” The students really enjoyed it a lot. Everyone was amazed with Betj Jasareno when she turned-over the Book of Knowledge to Caryl Anne M. Barquilla who humbly accepted and promised to continue the tradition of academic excellence of The Lewis College. While Merryl G. Amor handing the Key of Responsibility to the future President of Supreme Students Government, Caryl Anne M. Barquilla, Juniors and Seniors are excitingly preparing for Rigodon dance performance.

Kyoko Nakamura and Anthony Gerald Delfino received the Face of the Night Award. Mr. and Ms. Valentines Award was given to Kirstein Diones and Clakson Jeresano respectively. Clara Angela Espedido and Glenn Carl Aninipot were chosen as Stars of the Night. The emcee, Ms. Patricia Addie Jimenez was selected as the Ms. Junior while Salvador Nee Estuye was the Mr. Junior. The Mr. and Ms. Senior Awards were given to Michelle Naperi and Kazuo Tabata. Tyrone Christian Rocha and Caryl Anne M. Barquilla were proclaimed as the JS Promenade King and Queen 2012.

The awardees started the ball rolling with their first sweet dance with partners. Everyone’s tummies were grumbling, so everybody ate! Besides eating, everyone started making memories through picture taking. Everyone poses like a prom queen and king, some poses cutely and poses like a gangster. While taking pictures, some students took the heart shaped balloons without even asking for permission. While others were taking pictures, others were eating. After dinner, they started to have fun through dancing. The students requested love songs wherein they can only express their feelings to their special someone. When the clock strikes 12, it is time to go home. I swear to thee… I do acknowledge the sounds around me.. Therefore I vow I am not a deaf. (“An elegy of a genuine scenario of the Tragic ruler”)

The Experience Of Junior and High School Prom. (2017, Jan 04). Retrieved from http://studymoose.com/the-experience-of-junior-and-high-school-prom-essay 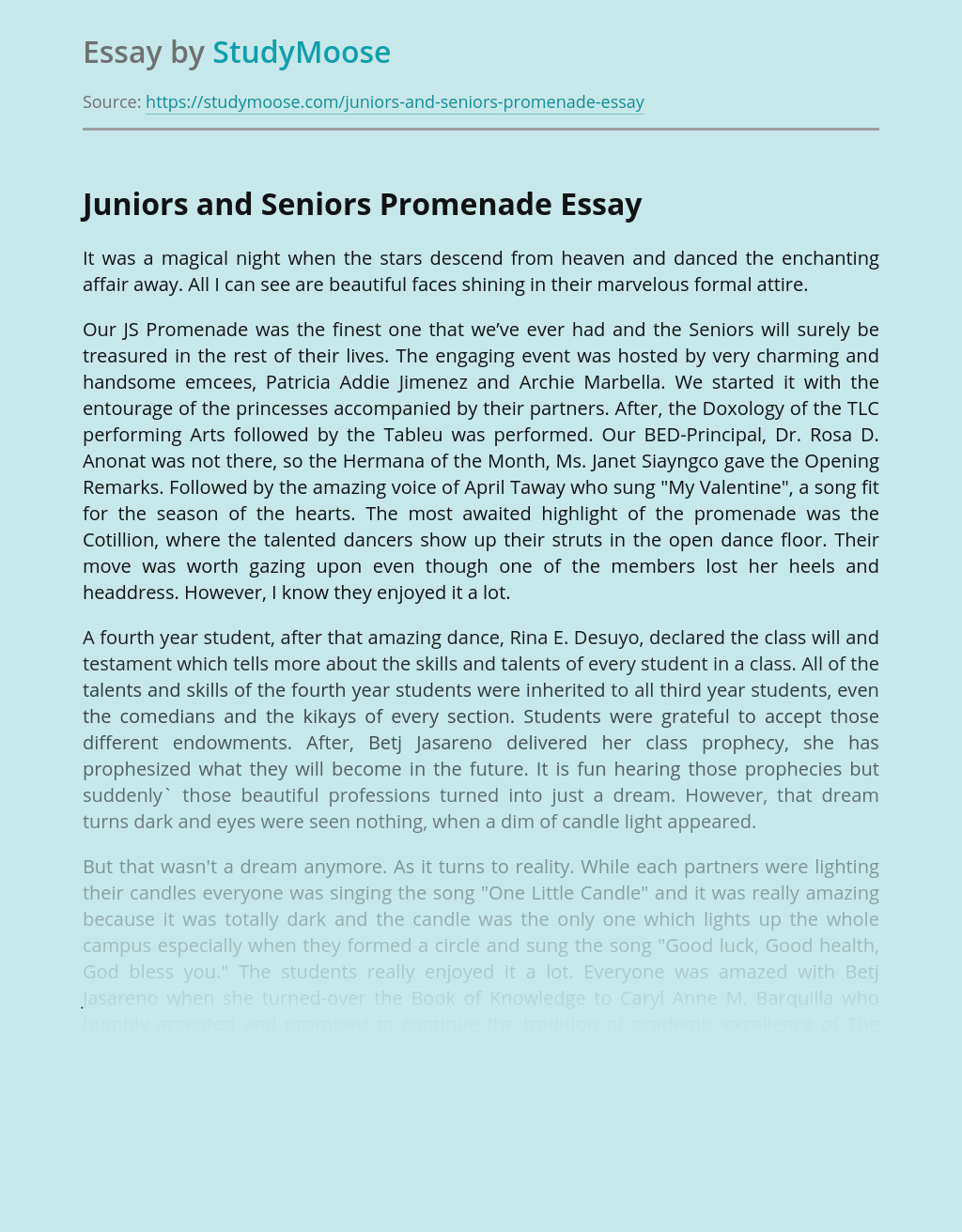 Turn in your highest-quality paper
Get a qualified writer to help you with
“ The Experience Of Junior and High School Prom ”
Get high-quality paper
Helping students since 2015
Stay Safe, Stay Original