The Eucharist Sacrament, Signs and Symbols in Christianity

The seven sacraments are ceremonies that point to what is sacred, significant and important for Christians. They are special occasions for experiencing God’s saving presence. The seven formal sacraments are identified as; baptism, confirmation, Eucharist, reconciliation, anointing, holy orders and marriage. Sacraments entail symbols and signs. Symbols are objects or patterns that are used to represent an invisible reality. Each symbol and sign work together to make God’s love more visible for us. A sign and symbol are not the same.

Don’t waste time
Get a verified writer to help you with The Eucharist Sacrament, Signs and Symbols in Christianity
Hire verified writer
$35.80 for a 2-page paper

A sign is something that points to another reality and means what it signifies; the meaning is mostly fixed. In contrast, a symbol is a multidimensional sign that points to another reality and manifests the reality to which it points (Mueller 188). To gain a clear understating of the sacraments and the signs and symbols associated with them a brief summary is vital. Baptism (water) is necessary to salvation, because without it we cannot enter into the kingdom of heaven.

Reconciliation or Penance is a Sacrament in which the sins committed after Baptism is forgiven.

The Holy Eucharist is the Sacrament which contains the body and blood, soul of our Lord Jesus Christ under the appearances of bread and wine. Confirmation is a Sacrament through which we receive the Holy Spirit to make us strong and perfect Christians. The Sacrament of Matrimony is the Sacrament which unites a Christian man and woman in lawful marriage. Holy Orders is the sacrament that bishops, priests, and other ministers of the Church are ordained and receive the power and grace to perform their sacred duties.

To receive Holy Orders worthily it is necessary to be in the state of grace, to have the necessary knowledge and a divine call to this sacred office. Anointing of the sick is the Sacrament which, through the anointing and prayer of a priest, gives health and strength to the soul, and sometimes to the body, when we are in danger of death and sickness (Caldecott 62). There are two major symbols related to the Eucharist; wine symbolizes the blood of Christ and the bread symbolizes the body of Christ. The bread and wine are received during mass and represent not only the body and blood of

Christ but the unity of the members attending and the unity of the Church. The sharing of this act also symbolizes fellowship, a sense of solidarity amongst those participating, in a sense, one body. The Last Supper, Jesus identified the broken bread and poured wine with His own Body and Blood, broken and poured out in is suffering and death. The breaking of the bread came to be the act of the Eucharist. Christians believe the Eucharist or Communion is both a sacrifice and a meal. It is believed as the real presence of Jesus, who died for our sins. The sacrament of the Holy Eucharist is considered food, a spiritual food.

The Eucharist is considered the bread and wine, the Body and Blood of Jesus, a sign of nourishment. In Holy Communion the bread is a visible sign to remind us that the lord suffered and died upon the cross for each and every one of us. As we eat the bread, we can remember the love and grace that God has given us. The wine symbolizes the blood that Christ shed for us, but it also symbolizes that same drink in which Jesus said in Matthew 29:29, “I will not drink of this fruit of the vine from now on until that day when I drink it anew with you My Fathers Kingdom. ”

It will be shed for you and for all so that sins may be forgiven. Do this in memory of me” (Sacramentary, Eucharistic Prayer II, p. 549) (Mueller 203). As one receives Christ’s Body and Blood, one is nourished spiritually and closer to God. In the event that Holy Eucharist is about to be received or swallowed, bread and wine are present under which Jesus is present. The Holy Eucharist is considered a spiritual food thus; it does for the soul what physical food does for the body.

Let us think about that, when we eat physical food it becomes a part of us. We hysically and at times mentally change. The nutrients, substance and even chemicals of the food we eat change the dynamics of our physical body and mind. Holy Eucharist or Communion does the same change to us but, spiritually. We become one with Christ. As our physical food becomes a part of us, the spiritual food is a union of our soul with Jesus. This union is a sacred union established by the Holy Spirit. Being united with Christ we are also united with those who are with Christ. This is a bond of charity which makes us one with our fellow neighbor.

The very sign of the sacrament symbolizes our total oneness in Christ; Many grains of wheat have been compounded together to make one bread which has become the Body of Christ. Many grapes have been crushed together in the press to make the contents of the one chalice which has become the Blood of Christ. We are many in One–and that One is Christ – “And the bread that we break, “says St. Paul, “is it not the partaking of the body of the Lord? Because the bread is one, we though many, are one body, all of us who partake of the one bread” (Corinthians 10:17) (Trese 219 ).

Our experience of meals, a gathering of word and food, resonates with Eucharistic meaning. There is great symbolism that comes to us from many sources about the Christian sacred meal. In ancient biblical times, there were meals that symbolized the celebration of the Eucharist. Passover meal, it was a meal of the Lamb, the bread and other symbols of the Jewish people’s time of slavery in Egypt. This meal and its story made present the time when they were led out of that slavery, through the waters of the Red Sea, to the teaching of the Sinai where the commandments of God were given.

It remembered their purifying journey in the desert where God nourished them with the manna from heaven and the water from the Rock. It recalled their entry into the Promised Land. God’s Spirit led them in this journey and was present with them in the Tabernacle, the Tent of Meeting. Another type of meal was the Todah meal which was a meal in the Temple. It consisted of a prayer of thanksgiving for some benefit, (the safe birth of child and birth of good crop), and the offering of sacrifice, (e. g. sack of wheat, a lamb), part of which was thrown on the altar of sacrifice in the Temple, part of which was shared with those gathered (especially the poor).

This was a prayer of thanks and sacrifice with a communion with God and among his people. The example of the, Todah, with its thanksgiving, sacrifice and communion with God and one another symbolizes the Eucharist. (Hellwig 136) Holy Communion unites is with Christ and heightens our love for God and our neighbor as well as, living like Christ. The act of Holy Communion is a continual means of God expressing his love for us.

Through this sacrament God extends his love and makes it evident in our hearts and expressed throughout our lives. Our faith can be weak and we need visible signs of God’s love. This sacrament’s primary purpose is to heighten sanctifying grace. Holy Communion is a sacrament of spiritual growth and strength. One’s soul is required to be in the state of sanctifying grace (free from sin) when receiving Holy Communion. One who is aware they have committed a sin(s) and receiving Holy Communion adds another layer to ones sinful state. Holy Communion preserves the soul from a spiritual death, to conserve our soul from mortal sin.

The Eucharist Sacrament, Signs and Symbols in Christianity. (2017, Jan 31). Retrieved from http://studymoose.com/the-eucharist-sacrament-signs-and-symbols-in-christianity-essay 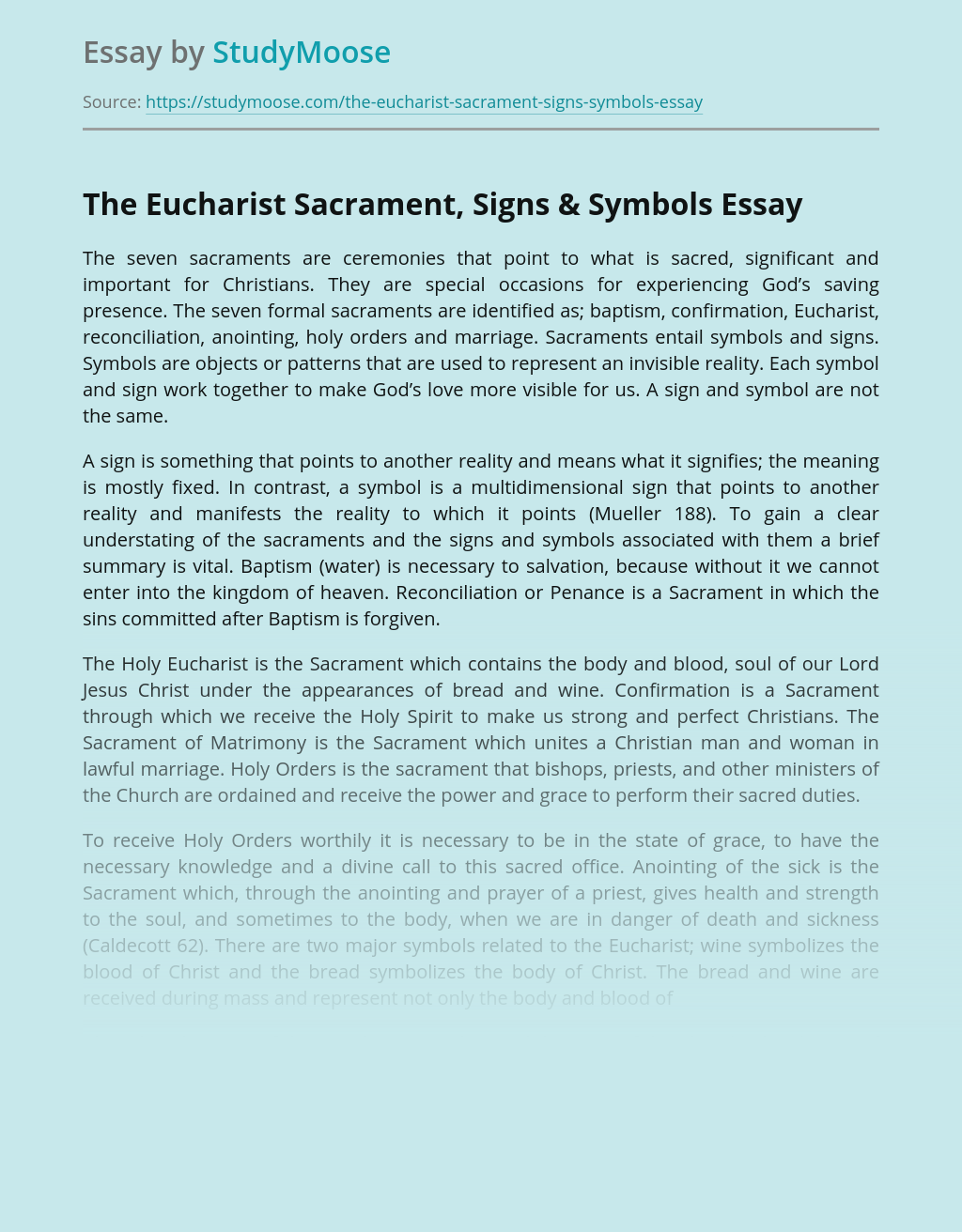 Don’t waste time
Get a verified writer to help you with The Eucharist Sacrament, Signs and Symbols in Christianity
Hire verified writer
$35.80 for a 2-page paper
Stay Safe, Stay Original