The effect of light intensity on the rate of photosynthesis

The aim of my experiment is to find out how light intensity affects the rate of photosynthesis.

Turn in your highest-quality paper
Get a qualified writer to help you with
“ The effect of light intensity on the rate of photosynthesis ”
Get high-quality paper
NEW! AI matching with writers

My theory behind this is the following;

Photosynthesis is the process that plants use to create energy for themselves.

It is best described from the following equation

glucose is the resulting energy that is needed by the plant to grow and survive. Oxygen is the waste product that is given out via the stomata pores when they become turgid, this is during the process of respiration.

Water is taken in via the root hairs which stick out in to the soil, these are located on the roots themselves, because of these root hairs this gives the plant a bigger surface area in which it can absorb more water. Water is essential for the process of photosynthesis and also to stop the plant from wilting, because plant cells take up water via osmosis which makes them tight or turgid and so the plant stays upright, but if there is no water in the cell then the cell becomes flaccid and loose causing the plant to wilt and die.

(Root hairs also collect minerals and nutrients for the plant through active uptake).

Carbon dioxide is nessacery for the reaction of photosynthesis to take place, it gets in to the plant as one of the gases in air which then diffuses through the stomata pores (which have to be turgid to let it in and so need water for osmosis).

At the same time as this the left over water vapour and oxygen are diffused out also through the stomata which again have to be turgid to let it out.

And finally sunlight is needed for the process of photosynthesis to take place. This is obtained by firstly the sunlight shining down on a plant, which gives the energy for the reaction to take place. It is taken in by the green pigment in all plant cells called chlorophyll, which is located in the chloroplasts of the cell. With out this then even if the plant had all the nessacery reactants the photosynthesis would not take place.

I also back my theory up using the following quote

The fact that all plants need light in order to photosynthesise has been proven many times in experiments, and so it is possible to say that without light, the plant would die. The reason that light intensity does affect the rate of photosynthesis is because as light, and therefore energy, falls on the chloroplasts in a leaf, it is trapped by the chlorophyll, which then makes the energy available for chemical reactions in the plant. Thus, as the amount of sunlight, or in this case light from a bulb, falls on the plant, more energy is absorbed, so more energy is available for the chemical reactions, and so more photosynthesis takes place in a given time.

There are many factors, which affect the rate of photosynthesis, including light intensity, temperature and carbon dioxide concentration.”

I will set up my experiment using the following equipment:

1) test tube filled with water and 0.50 of sodium bicarbonate

2) a plant that lives in a water ecosystem

First I will make sure that the temperature is set at 30 degrees Celsius. Then I will place the plant inside the test tube with the pre-set amount of sodium bicarbonate.

Then the other ruler parallel to the test tube.

Then I will measure at 11 different distances (three times each) of the light away from the test tube with the plant in and then pull the syringe head out. This will then reveal, (after a pre-set time of 5 minutes timed by the stopwatch) how much oxygen was given off measured in cm by the ruler next to the tube. As that is where the syringe will suck in the oxygen as shown below in the diagram.

My test will be fair, as I will be using the same equipment throughout my experiment and I will be taking all of the measurements throughout the experiment. The only changes I will be making is to the light intensity by moving it closer or nearer to the plant,

I will follow the following safety precautions to make sure the test goes well.

* I will leave the lamp to cool for 30 second periods between the different distances of the lamp to be tested.

Distance of light from plant

And so from my graph I can see that as the light moves away from the plant in the test tube that the rate of photosynthesis decreases. This is because to cause the reaction of the reactants during photosynthesis this needs energy, which in a plants case comes form the sun light taken in by the green pigment called chlorophyll. And so when there is less energy the plant has the reduced ability to make glucose or food for itself to survive and so will give off less waste products as we see from the graph. We see this from the graph because the line of best fit drawn in goes on a downward slope indicating the amount of waste product of photosynthesis (oxygen).

I found that the experiment was easy to do. This is partly due to the fact we did the test via a computer program as the real test would be time consuming and less accurate. But the way I explained to set up the experiment is the same way it was set up on the computer program, making my method correct. Because due to the program we could easily set the temperature for 30 degrees and also easily set the time and the sodium bicarbonate and so make sure that all the possible variables stay the same.

I did not have any anomalous results. I don’t feel that I could improve the way I carried out the experiment. But I do feel I could have changed a few things about the experiment. For example I could have examined other variables such as lack of air or no soil or changes in water amounts given to the process of photosynthesis etc. Also instead of measuring the length of the oxygen bubble I could have taken measurements changing the light intensity by percentage (%) or power of the light. I had no problems due to the use of the computer program and overall I felt the experiment went well.

The effect of light intensity on the rate of photosynthesis. (2016, Jul 02). Retrieved from http://studymoose.com/the-effect-of-light-intensity-on-the-rate-of-photosynthesis-essay 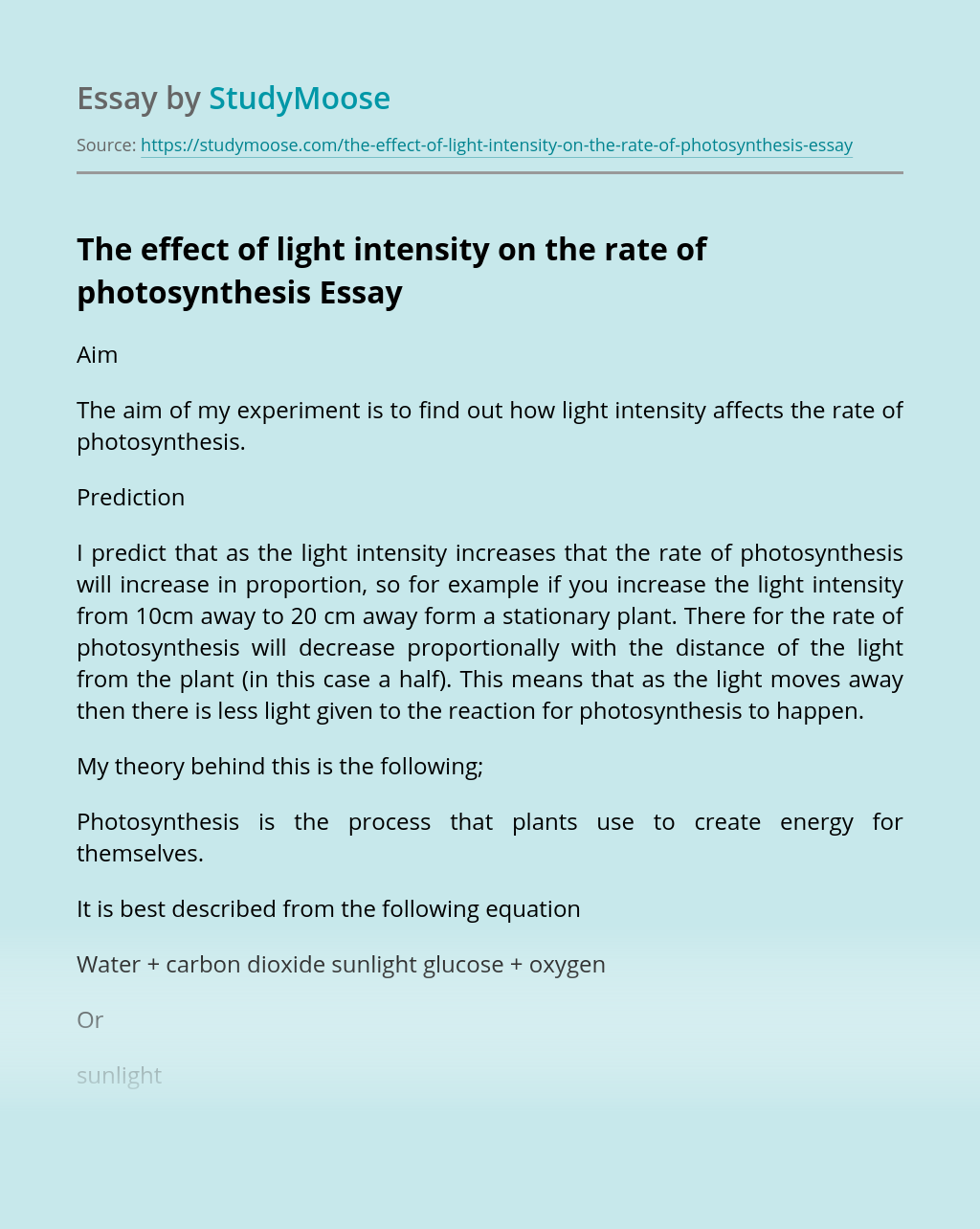 Turn in your highest-quality paper
Get a qualified writer to help you with
“ The effect of light intensity on the rate of photosynthesis ”
Get high-quality paper
Helping students since 2015
Stay Safe, Stay Original