The Destruction of the Old Regime

France prior to 1789 had been ruled by the highest order of nobility. The king and queen commanded the country from afar while the middle and lower classes agonized in pain at their excessive life of luxury. The constant strain that this was putting on the lower classes created much resentment towards the monarchy; continually ushered in alongside huge financial disparities from the lavish impulses of the nobility and common squandering of money lead to the collapse of the French’s Old Regime in 1789.

Don't use plagiarized sources. Get your custom essay on
“ The Destruction of the Old Regime ”
Get custom paper
NEW! smart matching with writer

The country’s economic problems had many different factors, but in one way or another from the French monarchy bankrupting itself. King Louie XVI and Queen Marie Antoinette, along with the other elite members of Versailles ate, dresses, and all around lived a life of greed. They ate six coursed meals, dresses in the most expensive and newest clothes / jewels, and lived in the biggest, vastest castle in all of France: The Castle of Versailles, as Rick Brainard of history1700s.

com states it “The reckless court, led by the sprightly, frivolous, extravagant queen, Marie Antoinette, would not listen to the word “economy” ” (Brainard).

Then following King Louie’s mismanagement of funds in the American Revolutionary War of 1775-1783, in which he supported American troops with money, food, and artillery towards their victory and independence from Great Britain the total debt was at its lowest point in known history. Lastly, King Louie XVI was a king unfit to rule sparking the deaths of many at the bloody hands of the French Revolution.

Economic problems and hardships from the elitist rule and alongside the uncaring spending of money resulted in the demolition of the Old Regime.

The Destruction of the Old Regime. (2017, Jan 26). Retrieved from https://studymoose.com/the-destruction-of-the-old-regime-essay 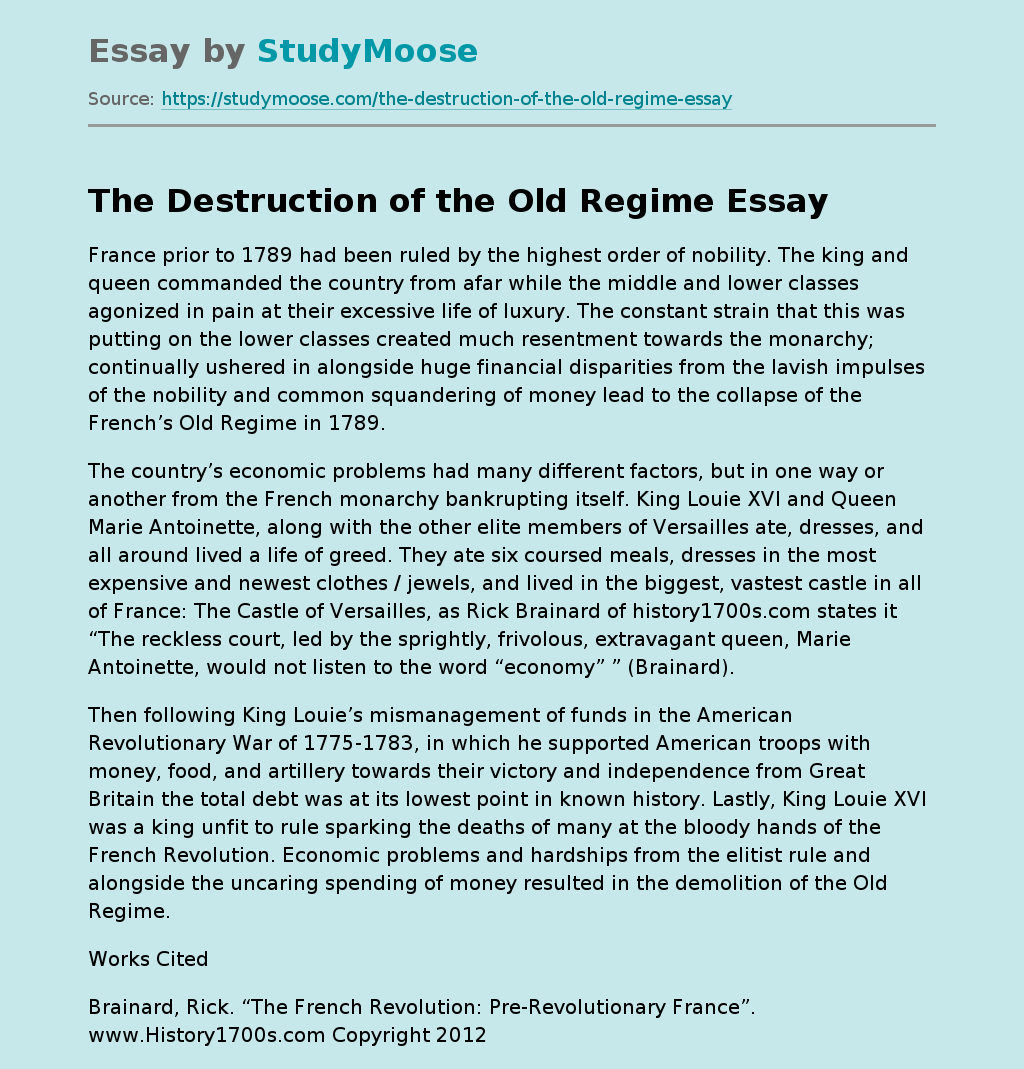