The Day I Decided to Change My Life

Domestic violence occurs across the world in various cultures and affects people of all economic statuses. I was in an abusive relationship; I was a victim of domestic violence in my previous relationship with Tony the father of my kids. A relationship that I should have gotten out of before it even started. But when you think that you have found the one, the love you have for that person blinds you from reality. It blinds you from what is right and what is wrong.

Don't use plagiarized sources. Get your custom essay on
“ The Day I Decided to Change My Life ”
Get custom paper
NEW! smart matching with writer

There is always one incident that makes women change and open their eyes.

For me, this was the day Tony brought another woman into our home and came after me that’s when I made the decision that changed mine and my kid’s life. “It’ll never happen to me! ” I use to tell myself. I didn’t understand how I could first hand witness my mother being abused and allow it to happen to me.

All my life I said to myself, “I will never let any man place his hands on me! And if he did I would leave him in an instant! ” But that’s easier said than done. It all started when i was a junior in high school when I meet Tony.

My senior year I was pregnant with my first baby. I made the chose to move in with Tony so he could provide for me and the baby. The abusive started about one month after I moved in his home with his parents.

He would yell at me and say mean things to make me feel bad about myself. When I was seven months pregnant Tony had came home from work and was upset that dinner wasn’t ready. He then started yelling saying “your worthless and a piece of shit Sandra. ” I then screamed at the top of my lungs “you are such an ass.

“Don’t you ever say that to me” Tony yelled back as he slapped me so hard that I flew across the room and into the wall. I instantly grabbed my face and started to cry. There are many warning signs that can be detected in an abusive man. One sign can appear simply harmless starting off with as the man being really jealous and possessive. But not all jealous guys tend to be abusive. To some women, guys who show that they are jealous, show that they care. Little by little his jealousy grew and was becoming controlling. He controlled everything I did and what I wore.

I wasn’t allowed to see or talk to my family or friends, put on makeup, or dress up. I wasn’t allowed to go anywhere but to the store, but had to be back in a secretion amount of time. When my son Isaiah was around seven Tony started verbally abusing him. Every time I would defend my son Isaiah, Tony would come after me yelling, push me, throw me on the bed, or slap me at times. As the years pasted I had two more children from Tony hoping things would get better but it didn’t. I tried leaving him but always went back to him. Tony had ways to persuade me to stay in the relationship.

Just when I thought I was out of the relationship, his sweet words would turn me back to him. He would tell me how he would not be able to live without me. He would come to my house crying and begging me to come back. My heart would melt with sadness and I would take him back. As the years past it got harder to leave him. He threatens to kill me and hurt my children if I left him. Even though I hated him I stayed with him because of the kids. I would cry myself to sleep every night lying next to a man I hated but it was all my own fault.

It was a relationship that had destroyed me mentally, emotionally, and physically. I was depressed and couldn’t eat. Not only did it affect me but it affected my children. It had gotten to the point where when Tony started to yell at me they would run and hide. My mother has gone through it all, and worse. I knew deep in my heart I had a lot of people to whom I could have turned, but I chose to keep my pain inside. My mother in law would tell me to stay and just don’t say anything to Tony when he would hit me, just take the beatings. I was so alone and confused I didn’t know what to do.

Until one day my mother n law told me “some girl named Monica is going to move in with us. ” I was confused and didn’t know what she meant. That following day Tony came home with Monica. He said “this is my girlfriend and she’s pregnant with my baby. ” I was shocked and didn’t know what to think. He wanted her to live upstairs and me downstairs. I looked at him like are you crazy. I had so many emotions going throw my heard; I couldn’t think straight, all I wanted to do was hurt her. I told myself this is the prefect opportunity to finally leave Tony, so I grabbed my kids and left.

I made the best decision of mine and my kid’s life that would change our life’s for ever that day. Leaving him was the hardest thing to do but also the best decision I ever made in mine and my kids life. As we learned to live with our newly found freedom, our lives are so much better and going great. The children and I made new friends, and went on social outings. Our little world had expanded exponentially! The children went on to enjoy school and activities. Being a single mother of four kids gave me confidence and nurtured my self-esteem. I have my family by my side and support.

The Day I Decided to Change My Life. (2016, Nov 02). Retrieved from https://studymoose.com/the-day-i-decided-to-change-my-life-essay 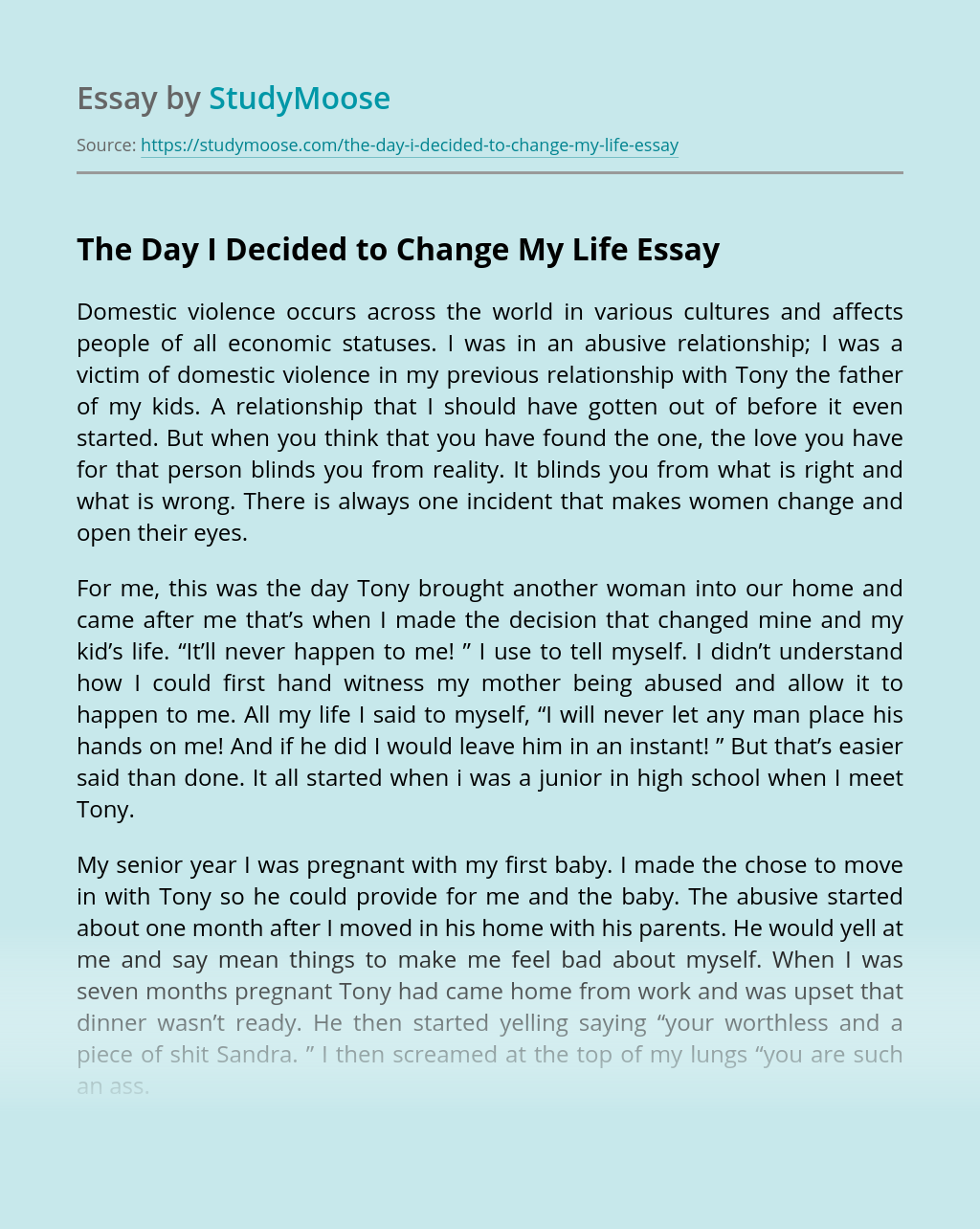