The consequences of cutting down trees

There are many consequences for the environment of cutting down trees. Known as deforestation it has huge effects on the environment. It one very big effect is the loss of biodiversity which is a direct effect of cutting down trees. There are many reasons of which humans act out deforestation. For example is so that we can set up cattle farms. Also grow crops of which can then be sold to people. Another reason is for urbanisation and for the building of roads.

Turn in your highest-quality paper
Get a qualified writer to help you with
“ The consequences of cutting down trees ”
Get high-quality paper
NEW! AI matching with writer

However what people don’t know as a risk of cutting down trees is that many pharmaceutical companies produce their medicines from resources found in rainforest and so cutting trees down in these areas can mean the lack of useful medicines for western use this is because 25% of western medicine comes from such rainforests. Many balanced cycles rely on tress in order for them to work. Without these cycles can be interrupted and have catastrophic results for the environment.

There would also be less carbon compounds of which could be provided to animals through the carbon cycle. This would cause death of animals as carbon compounds of which come from trees are key in healthy developing life. Due to the cutting down of trees of which they would then be discarded or use in another way this would halt the normal decay process of which trees go through when the naturally fall and decay. The lack of this process would mean the lack of fossil fuels and the decaying tree would then over millions of years develop into fossil fuel. This could be very bad for the population as it would mean that there would be a lack of fossil fuel.

However you could argue that this could possible not be a very big consequence as the human populations dependence on fossil fuels is too great and which the end of fossil fuels is looming and so this could influence advancements in other areas of fuels and electricity of which the human population could then use and live off of. The Nitrogen Cycle would also be affected if trees were cut down. If there were no trees then there would be more NO3 in the soil as it would not be taken up by plants and trees. This would then mean that there would be more denitrifying bacteria in the soil and this would then leas to more Nitrogen in the atmosphere. Excess Nitrogen in the atmosphere of which can have deadly effects. Burning the felled trees can also contributes to a large amount of nitric oxide in the atmosphere. Nitric oxide can combine with oxygen gas to for nitrogen dioxide, which reacts with water vapour to form a strong acid (nitric acid). This can precipitate out of the atmosphere in the form of the deadly acid rain. The acid can damage trees and kill fish. Because of a lack of trees there would be no absorption of nitrogen and so plants would lack nitrogen compounds.

These plants of which would then be eaten by animals would then be lacking this compound and so the animals could then die. The greenhouse effect and global warming is a consequence of cutting down trees greatly linked to the disruption in the carbon cycle. Greenhouse gases such as carbon dioxide create a thick layer that absorbs the heat and reflects it back to Earth, rather than leting it be lost to space. This causes the Earth’s climate to change as temperatures go up. This can have many bad effects to the earth. For example this then causes the melting of ice caps. This causes loss of habitat and so the chance of extinction of animals in this area increases. The melting of the ice caps also causes the sea levels to rise and so flooding of low level land occurs. This in turn causes loss of habitats as well as destroys crops. The loss of habitats can then cause less rainfall which then results in droughts and so crops die and create barren land as well as people become ill.

Diversity can also be badly affected by the cutting down of trees. Diversity is the variety of living organisms within a particular area. There are three types of diversity: Genetic, species and ecosystem. There are less trees which means a reduction in diversity of which is specifically species diversity. Species diversity is the number of different species and the number of individuals of each species within any one community. The cutting down of trees also means less habitats and so more completion for these areas and so more animals die. This refers to Ecosystem Diversity; this is the range of different habitats within a particular area. The cutting down of trees also means that due to other diversity reasons the animals die and they also have less breeding areas due to loss of habitats. This reduces reproduction and so the animals do not pass on their genes and so there is then less genetic diversity. Competition is also effected when the cutting down of trees occurs.

This is because the cutting down of trees increases completion for not just habitats but also for food. This lack of resources and therefore increase in competition means that many animals die and they are not able to compete successfully for what they need to live. The loss of trees also could mean the loss of camouflage for many animals of which normally live in and around trees and normally use trees to cover and camouflage themselves. This means that prey cannot hide as easily and so is a lot easier to see for the predator and so the prey is a lot easier to catch changing the competition. However it also mean the prey can see the predators more easily due to the loss of trees and so have more of a chance to get away from the predator of which they did not have before. So in conclusions there are many catastrophic effects of which occur from the cutting down of trees if which all have detrimental effect on the environment that we live in.

The consequences of cutting down trees. (2016, Jun 02). Retrieved from https://studymoose.com/the-consequences-of-cutting-down-trees-essay 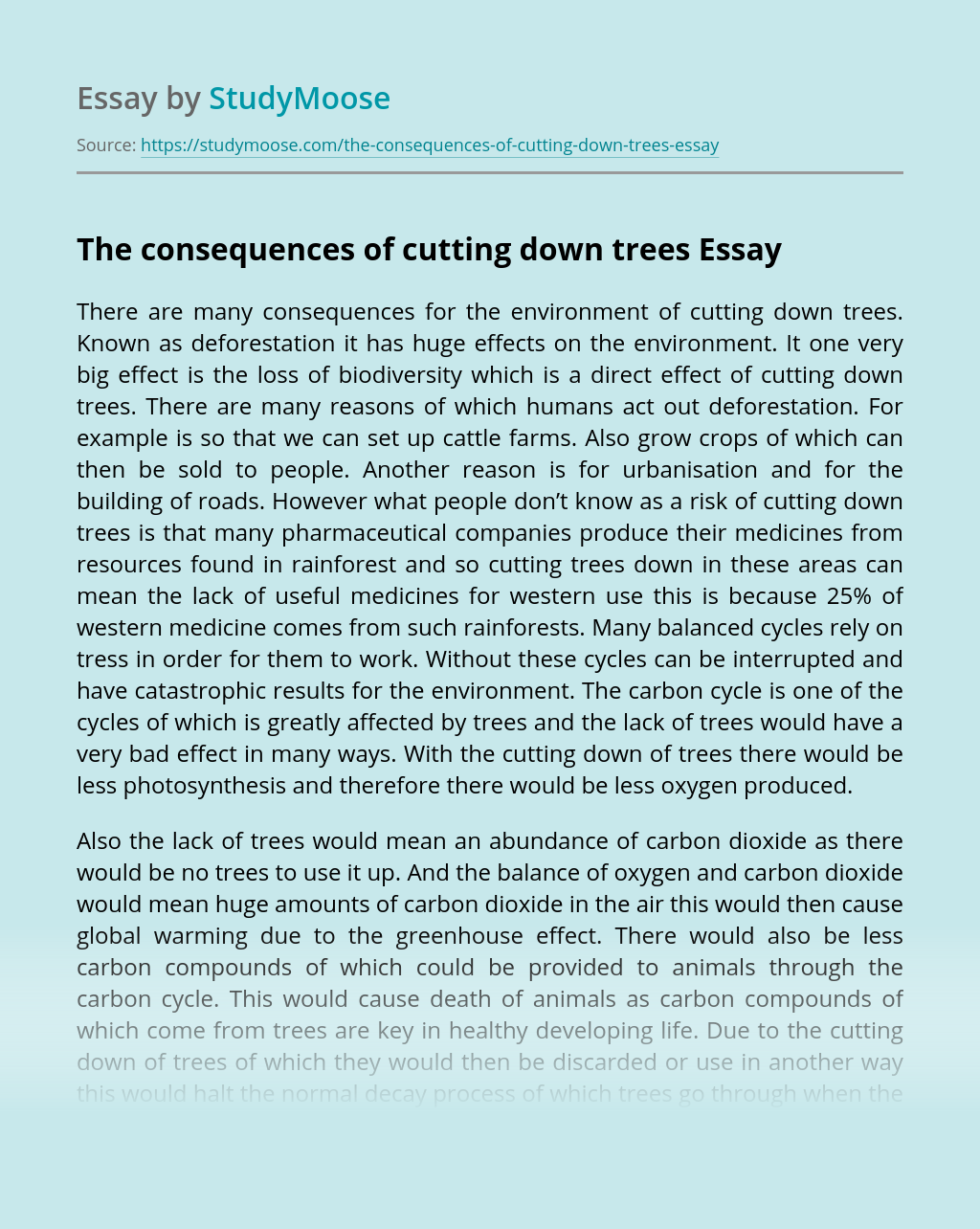 Turn in your highest-quality paper
Get a qualified writer to help you with
“ The consequences of cutting down trees ”
Get high-quality paper
Helping students since 2015
Stay Safe, Stay Original