The Concept of Beauty in the "Quilts" and "Where Are You Going, Where Have You Been?"

Can beauty or vanity be so pure that it can live on forever? This could be interpreted in many ways, just as demonstrated in the poem “Quilts”, the narrator believes it can. She wants to be immortalized forever for the beauty she lost many years ago. The character Connie, from “Where are you going, where have you been?” shares several common themes with the narrator of “Quilts,” vanity being one, as well as sadness.

Both characters, symbolize the obsession with beauty and carry the sadness that follows.

Don't use plagiarized sources. Get your custom essay on
“ The Concept of Beauty in the “Quilts” and “Where Are You Going, Where Have You Been?” ”
Get custom paper
NEW! smart matching with writer

They both encourage the so called importance of “beauty” in our society, and believe that beau-ty is very much important to their own lives, as well as societies. Beauty is a trait. Beauty is a state of mind, beauty is a personality. Most seem to have no problem identifying with beauty, yet it’s not easily defined.

Can beauty be defined by age, and does beauty exceed a certain point in your lifetime? That is exactly what Connie believes is true, she believes beauty is accompanied by young age.

Her mother was once a beauty when she was younger; she gathered that knowledge from old photographs. Connie feels her mother has aged poorly throughout the years, and her beauty faded as the years did, too.

Connie spent endless moments starring at her reflection to insure she was just as pretty, or prettier than the rest of the girls. I imagine the narrator from “Quilts” doing the same. As she stated, and wished for the first days when she “dazzled the sunlight with her beauty.

” “Every-thing about Connie-her clothing, her walk, her mouth, her laugh-also testifies to these two sides. Connie, however, only values outward appearances; she is always “checking other peo-ple’s faces to make sure her own was all right.” Connie’s identity stems from a rigid belief in physical beauty-“she knew she was pretty and that was everything”-and she even thinks her mother prefers her to her plainer older sister solely because of her looks”. (Korb)

Beauty is first nature for both characters, as they have both lived in a fantasy world. Both are narcissistic and shaped their identities around materialistic beliefs. Both characters lived their lives based on beauty, and within that they share a common interest.

Connie was caught in a difficult transition from her innocence youth to her doubtful future, believing age defines beauty, and that one day she would follow in her mother’s footsteps, los-ing her looks. Connie and the narrator share another common interest, because the narrator is also caught in a difficult transition of her own. The transition that death is close, and she is growing older, she will be unable to complete her tasks.

Both Connie, and the narrator share sadness in their lives. To suffer in silence is sadness, and a state of mind, that could become dangerous and take control. The narrator in “Quilts” displays her sadness when she pleads to have a purpose, as soon as she takes her last breath of sorrow. She feels as if she is a failure, and wishes a part of her life may be put to use for the comfort of others. She forever lived in the moment, and never realized her life would fade, nor did she plan on life after her beauty fades, too. “By placing line two, “I am a failure,” at the beginning of the poem, Giovanni causes a dramatic opening. This placement represents the speaker’s emphasis on her belief that she is a failure because it is the first thing she tells her audience”. (Female Poet Responses)

Connie’s realization of sadness is shown while she is in the kitchen trying to escape from Ar-nold Friend as explained in “Where are you going, where have you been,”

The awareness of not being able to see her family again, or sleep in her own bed could have been one of the sadness moments of her life. Connie’s empty heart began to reflect her sadness inside, which could later on determine her inner and outer beauty.

Slimp stated “her screaming, born of her encounter with evil, results in her trying to estab-lish a proper relationship with another human-being–in this case, her mother”. (179-181) That her attempt has succeeded is shown when she sacrifices herself by going out, at the end of the story to meet her fate, thereby sparring her family a violent and deadly encounter. She has shown herself to be a fully breathing human-being, one who has, in a moment, developed the spiritual life lacking in her former existence.” found in The Explicator.

Throughout both stories, the narrator’s and Connie’s differences, yet similarities brought them together as a whole while I was reading. The natural beauty of both characters trans-formed those two into sadness. These two stores show that between two completely separate stories and lifestyles, there can always be a connection and similarity. In these different situa-tions, both stories are different, yet similar.

Most people try to avoid sadness. It seems both characters have constant moments in sad-ness and have reveled in it; almost consuming their lives. The need of using beauty to gain power is not something new; it’s not something that will ever change as the years continue. I feel becoming consumed with vanity will always bring some kind of unhappiness.

In conclusion, I feel as if the narrator and Connie shared many similarities through their dif-ferences while reading these two stories. Beauty and sadness are the two that dominant and re-occur throughout the stories and stood out the most to me, more than any other characteristics.

The Concept of Beauty in the "Quilts" and "Where Are You Going, Where Have You Been?". (2019, Dec 01). Retrieved from http://studymoose.com/the-concept-of-beauty-in-the-quilts-and-where-are-you-going-where-have-you-been-essay 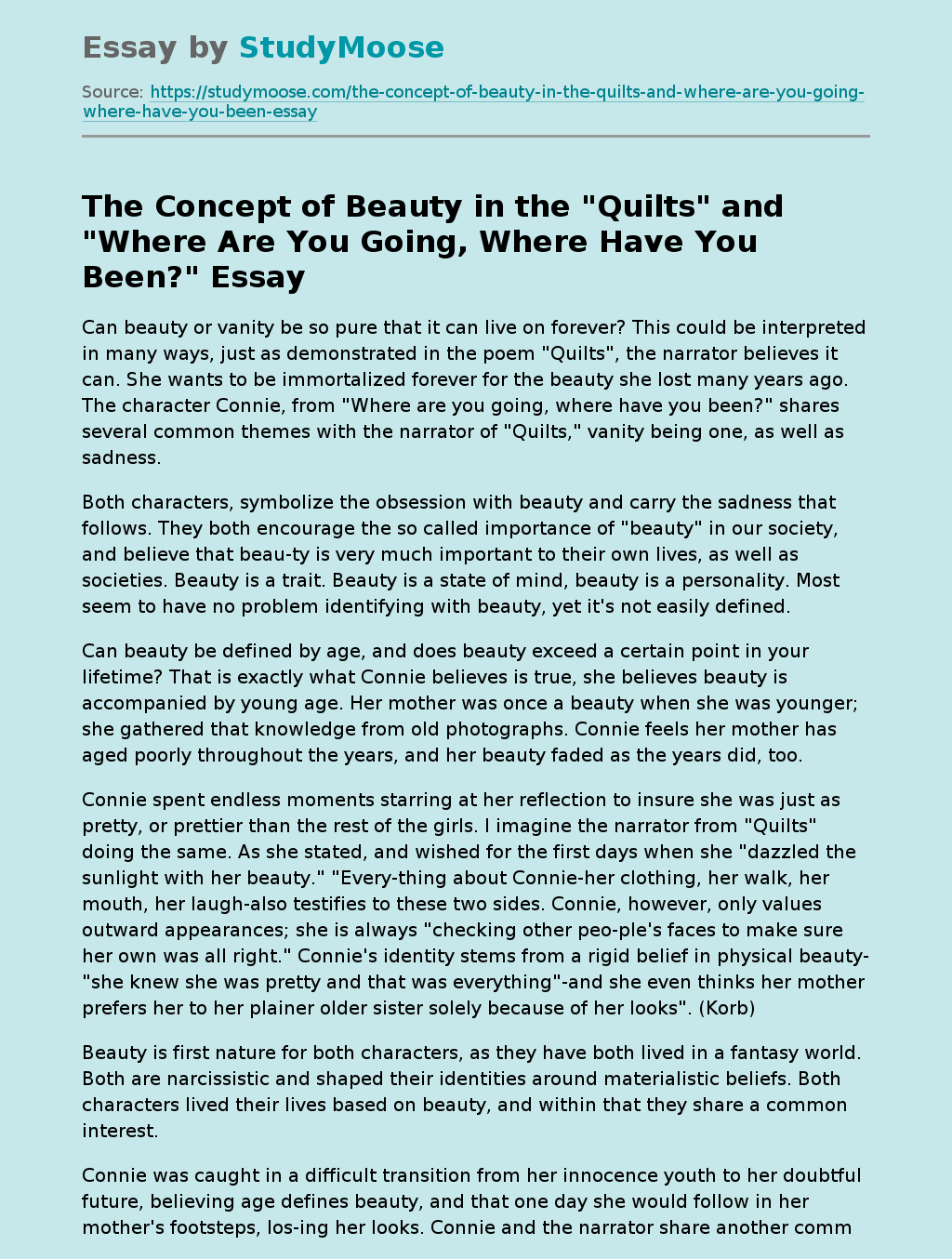