“The Collector of Treasures” by Bessie Head

Bessie Head was born and reared in from South Africa.She is the author of “The Collector of Treasures.” Many points that she depicted in her story were about the oppressive attitudes some men had about women and children and how society outcast certain women based upon what happened in their lives or upon what they could or could not do.

In this story, “The Collector of Treasures,” Dikeledi, a strong and resilient characteris married to a man named Garesego who is a womanizer.

Garesego believed that everything had to be about sex. He did not take care of his responsibilities as a man. Head described him as the type of man who had sex with women like dogs, out of canal lust. Out of the four years that they were together, Garesego got Dikeledi pregnant 3 times and left her. He did not leave and go to another village, he stayed in the same village and did not take care of the sons he helped bring in the world.

On the contrary, Paul is completely different from Garesego. Paul is portrayed as the man who cares about his woman and treats her like a person. He is there for his wife, Kenalepe, and their children. Seeing Paul treat his wife like a person was something new for Dikeledi and seeing that type of action from a man to his wife led Dikeledi to try to talk to Garesego.

Garesego is your typical male, so when Dikeledi asked him for money to take care of their children, he expected sex in return.

Dikeledi had another plan in mind. Her mindset in this scenario was that Garesego penis is the only thing that makes him different from her and he used to control women. Therefore, when she castrated him, not only did she kill him, she made him her equal.Garesego was a man who did not have any respect for women. He used them as sex objects and threw them away when he was done. In Dikeledi’s experience, he used her one too many times. Without his penis, Dikeledi felt he could not hurt anyone anymore, especially her. She had watched him treat her wronglongenough as well as other women. Dikeledi felt that without his penis, Garesego and she would be on the same level.

This story is entitled, “A Collector of Treasures” and Dikeledi was definitely a collector of treasures. Even though throughout the entire story, she had nothing but heartbreak after heartbreak and bad things done to her, nevertheless, she did not let that affect who she was destined to be. Dikeledi was not the ordinary lady, she was stronger than the average woman and knew how to do everything the average woman and man could. That is one thing she treasured. Dikeledi also treasured the fact that she could do what she needed to do to make sure her and her family was taken care of. Dikeledi treasured the fact that she was a strong, independent woman.

Dikeledi’s name meant “Tears.” Throughout the entire story, Dikeledi never shed a tear whether it was happiness or sadness. She valued her strong willed mind and her determination to do the unbelievable. Due to the fact that she was a strong woman probably meant that she caused someone else tears, but not herself. There are some ironic points in this story. One is that the protagonist’s name was Dikeledi and you pronounce the beginning of her name as “Dick” which is a slang name for penis. Also, the author of this story name is Bessie Head and Dikeledi had a good “head” on her shoulder. Dikeledi was a collector of many treasures and she added her husband’s penis to the collection. Throughout Dikeledi’s hard life, she has looked beneath the surface and collected small treasures, and these gave her the strength to go on.

“The Collector of Treasures” by Bessie Head. (2017, Jan 22). Retrieved from http://studymoose.com/the-collector-of-treasures-by-bessie-head-essay 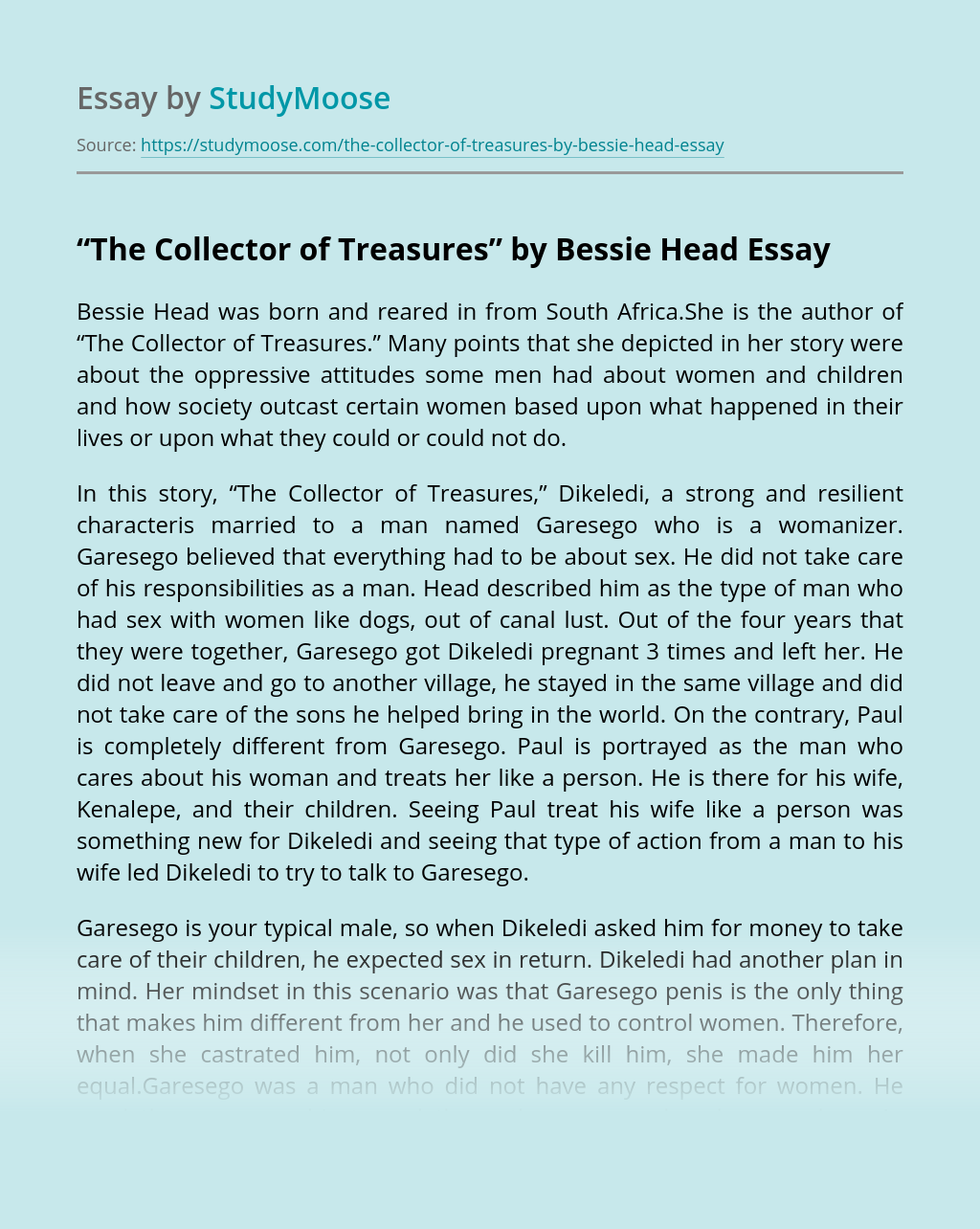 Don’t waste time
Get a verified expert to help you with “The Collector of Treasures” by Bessie Head
Hire verified expert
$35.80 for a 2-page paper
Stay Safe, Stay Original