The Cinderella Story: A Tale That Was Influenced For Centuries

The Cinderella story has thousands of translations and existed through centuries of storytelling. Historically Cinderella can embody a flexible character who can be clever in overcoming adversity in a cruel household while working towards a happy ending. Today many of the lessons and aspects of the tale are still modeled after Charles Perrault and Campbell Grants edition to the story. These author’s heavily influenced the way “Walt Disney” adapted Cinderella. This film version created one of the most popular adaptations of the fairy tale and predominates the way Cinderella stories are presented and appeal to audiences.

Don't use plagiarized sources. Get your custom essay on
“ The Cinderella Story: A Tale That Was Influenced For Centuries  ”
Get custom paper
NEW! smart matching with writer

When the core of Cinderella is associated with only one variant the representation of the fairytales final message is mistaken as a love story or showing kindness to those who are cruel as the overall lesson. This adds conformity to the way the story can be represented and erases not only historical variants, but changes how it’s now portrayed.

Cinderella stories can be traced to early human civilization.

The initial versions of these fairy tales have carried darker elements and particularize events of the original heroines overcoming their oppression. The story called Yeh-hsien originated in the 9th century and arises from China. The story represents one of the oldest versions of Cinderella. In the story “Yeh-hsien”, the main protagonist is left in the care of her abusive stepmother. The girl has to do life-threatening chores like “[collecting] firewood in dangerous places and [drawing] water from deep pools” (107). The story of Yeh-shein represents a resilient heroine who works towards her safety and happiness rather than highlighting aspects of her beauty shes ”Intelligent and good at making pottery” (107).

The story also doesn’t concentrate on her relationship with the prince. When we take a single Cinderella version and have it represent the whole we not only lose different cultural themes, but put barriers on the way the story can be told.

Authors of Cinderella make various versions of the stories for all kinds of audiences and cultures. Commonly fairy tales inherited patterns and showed what other texts strive from or fall away from overtime. For example, Terri Windling, author of Cinderella: Ashes, Blood, & the Slipper of Glass, mentions numerous variants of the Cinderella story and she observes the way Cinderella is adjusted for different cultures. Winding explains the impact of Perrault’s edition and how he “eliminated the mother’s ghost, the lentils in the hearth, the blood–drenched shoe, and added a cheery fairy godmother complete with a magic wand”. These traits show how the rougher aspects of the tale were polished and replaced in “Walt Disney’s” “Cinderella”.

The outcome of Perrault’s story created a “clearly more virtuous, and less self-motivated” Cinderella also the evil stepsisters traits are “no longer actively sadistic, merely vain, and spiteful” (Windling). When these popular themes are reused over time it changes the story to one with less morals and hardship into creating the allure of being a princess and applied marketing opportunities. Windling addresses that these “editions are responsible for the helpless girl we call by the name Cinderella today; a Cinderella decried by feminists unaware of the Ash Girl’s bold ancestry”. Although Windling has conflicting points and addresses the Cinderella story as “a woman’s story”. This idea also follows the model Disney created which gives audiences pre-assumptions and leaves a gap in the ways Cinderella can be represented and could relate to people. For instance, we have even better modern adaptations of Cinderella where authors give her a personality that has a variety of feelings, and doesn’t have to meet norms like falling in love with a Prince or the main character being female. There are many Cinderella stories that adjust to modern times and project a new type of happy ending, but these stories fail to be popularised beyond Disney.

As we keep recycling the same Disney representation of Cinderella we lose other ways Cinderella can be represented. Stories like ‘Donohue’ or ‘Billy Beg and his Bull’ don’t get associated with the way that Cinderella can be modernly represented. For example, in the story “Kissing The Witch” by Emma Donohue, the old tale is put in a new skin. We see a protagonist who shows signs of being depressed because her mother passed away and explains her feelings, “They knew every question and answer, the voices in my head. Some days they asked why I was still alive. I listened out for my mother, but I couldn’t hear her among their clamor” (pg. 2). This protagonist struggles with loss and is trying to understand what can make her happy. As the story continues towards attending the ball we hear more of the voices in her head pushing her towards the prince, but she realizes she won’t find her worth or happiness by marrying him and concludes with a genuine love story between Cinderella and her fairy godmother. This story is directed at an adult audience, but shows that Cinderella shouldn’t be limited to heteronormative and gendered themes like feminine submissiveness of needing to be rescued or always marrying prince charming.

It’s understandable that Disney’s film adaptation of Cinderellas is so appealing to audiences. The pleasant film was made in 1949 and will continue to influence the way generations perceive Cinderella. Subsequently, the original lessons, hardships, and turmoils are disconnected and forgotten to reward being passive and pure. These sugar-coated components take away the grit we could see in Cinderella stories, in “America’s Cinderella” Yolen points out that the rest of the American Cinderella’s edition “is a spun-sugar caricature of her hardier European and Oriental forebears, who made their way in the world, tricking the stepsisters with double-talk, artfully disguising themselves, or figuring out a way to win the king’s son (296-297)”. The dominant Disney Cinderella variants now leave people guessing about the overall lesson of the fairytale, and that idea shows the lack of acknowledgment for older editions of Cinderella, “this Cinderella of the mass market books finds her way into the majority of American homes while the classic heroines sit unread in old volumes on library shelves (Yolen, 297)”.

As we’ve popularized one version, we confine Cinderella stories and ignore their possibilities. As the lessons have changed we’ve adapted the fairytale to focus on the love aspect of Cinderella’s life or accentuate showing kindness to those who are cruel as the stories meaning. We are forgetting the aspects that carried Cinderella through centuries. The modern alteration leaves people confused about the lessons and effects of mass marketing princess culture towards girls. As Cinderella can go beyond the story audiences are accustomed to, Cinderella shouldn’t be made less than she has been. This mold cheapens our most cherished dreams, and it makes a mockery of the true magic inside all of us– the ability to change our own lives, and the ability to control our own destinies (Yolen, 299). Cinderella may not change in the future, but it’s important that the Cinderella who speaks to all of us and has existed through centuries won’t be ignored or forgotten.

The Cinderella Story: A Tale That Was Influenced For Centuries . (2021, Oct 14). Retrieved from https://studymoose.com/the-cinderella-story-a-tale-that-was-influenced-for-centuries-essay 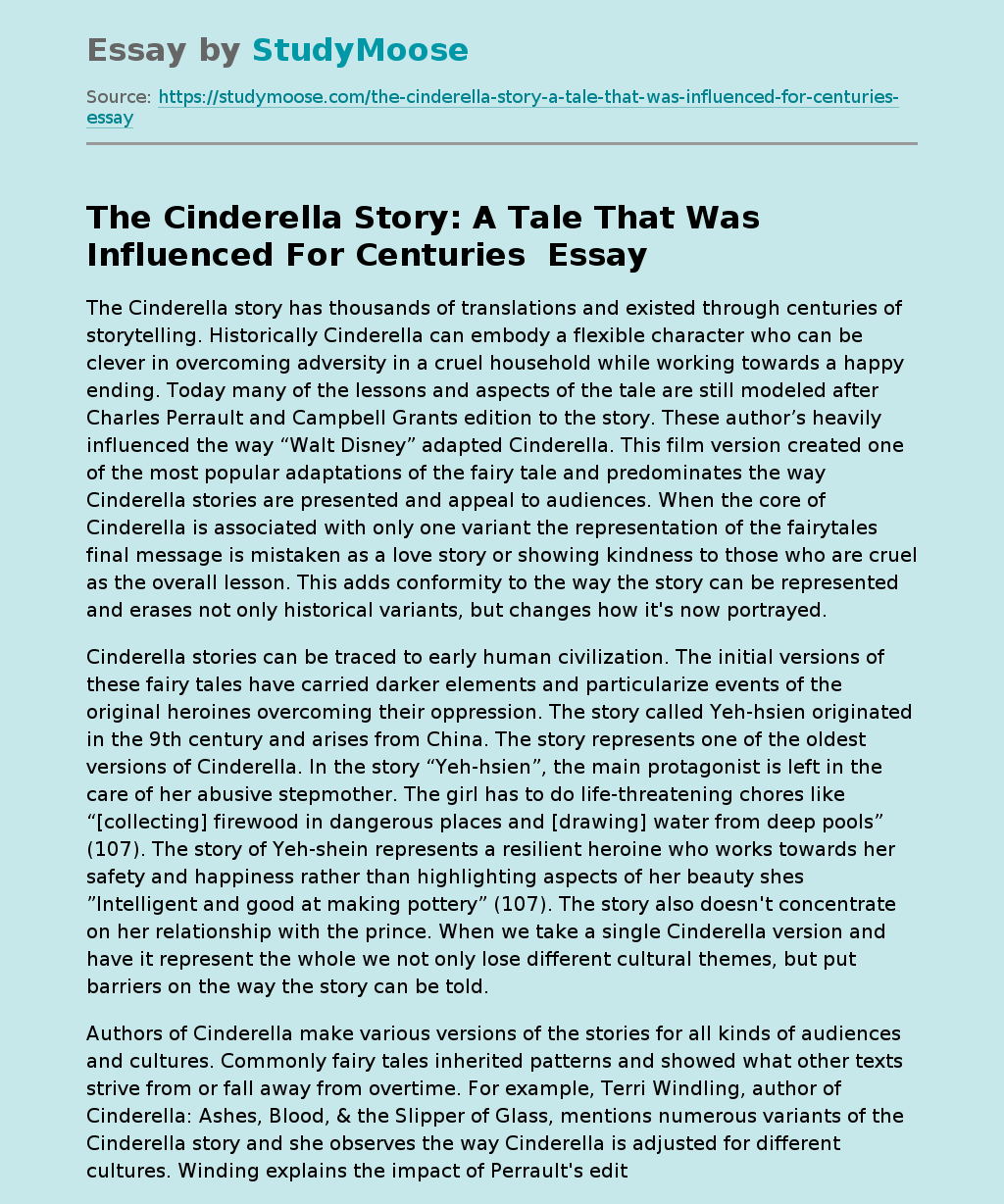