The Chase-An Example of Descriptive Writing

My wrists started to ache terribly as I trudged along the hard concrete road. Usually, when I took this route home, I passed all sorts of strange looking people. Where we lived, was an odd place, the people there were very friendly, but sometimes too friendly, getting in the way of your private life, asking personal questions that you didn’t really know how to answer. But on this particular night, a humid night at that, there was absolutely no sound to be heard.

Turn in your highest-quality paper
Get a qualified writer to help you with
“ The Chase-An Example of Descriptive Writing ”
Get high-quality paper
NEW! AI matching with writer

Not even the squeal of a tyre edging around the street corner, or the cackle of an old man passing by. Feeling the aching in my wrists turn to a sharp pain, I peered down at the several plastic bags that I was holding; full of the essential shopping that I had gone out to get last minute for dinner.

One of the bags (the one that was hurting my wrists) was clearly overfilled, but I couldn’t do anything about that, not now, in the middle of the street.

Letting out a heavy sigh, I carried on walking, reaching carelessly into my pocket to clasp my phone. In the humidity, it felt lovely to have the cold, metal block against my hands. I pulled it out, feeling around in the darkness around me for the switch to turn it on with. I paused, under a spot in which the moonlight was beaming down upon on the road. Underneath the only source of light in the pitch black city, I checked my phone for any messages or calls that we important.

There was nothing, apart from one message from my sister telling me to buy her some magazines. I hadn’t and since I had already come out of the shop and had begun my walk home, I wasn’t going to go back just for her sake. Feeling even hungrier as the time sped past, I decided that it would probably just be better to go home so that I could eat as quickly as possible.

My stomach however, had other ideas. The loud rumble that came from deep inside it, suggested that I should eat preferably sooner rather than later. Ignoring it, I crouched down and scooped up my plastic shopping bags, hearing the soft rustle from them. My feet felt heavy as I progressed along the long, winding round ahead of me. I knew that to get home from here took an extremely long time, at least 30 minutes walk. Normally, I wouldn’t mind in the slightest, but this time, I couldn’t help feeling like I was in the wrong place at the wrong time. I didn’t quite know why I couldn’t shake the feeling off that I wasn’t the only person in this street. At first sight, it may seem like it, but I’m sure as I walked further down the lane, eyes were penetrating into my back. I shook my head, almost laughing at myself for being so stupid. I was just tired, and with the tiredness, it seemed with me, came childishness and a very extreme imagination.

Continuing my journey home, I followed the shortcut along a broad alleyway to the edge of the city. I felt very insecure going through this route, but at least I knew I’d be home in nothing less than five minutes. I paced down the dark entrance quickly, looking at the bright stars in the sky as I did so. There was a certain smell of something in the air, an odour of something burning in the distance. The smell travelled to my nose and made it itch terribly. Whatever it was, it seemed to be getting closer and closer, sending me into what felt like a deeper sleep. I didn’t understand why, but I knew I had to get away from the smell as soon as possible, so that I could not be overcome with tiredness. Without any delay, I scurried along the never ending passage until I made it to an entrance that seemed to be quite a lot narrower than before. Despite my active imagination, I knew that this felt like a book that I had read as a child. I sniggered until my breath when I noticed that this scenario was remarkably like Alice in Wonderland, excluding the rabbit of course.

Feeling a little afraid at what could happen while I was standing in this backstreet, I retrieved my mobile and rapidly dialled the number of my friend, Skylar. She was a girl that would try her best to help in any situation, no-matter what the issue. I waited for her to answer her phone patiently, but my heart was beating wildly as I realised that there was probably no reception where I was standing. My breath became scarce as I forgot how to in the tension. All I could focus on was the ringer on the phone that was against my clammy ear, and what was going to happen to me in this obscure alleyway. I had heard such stories of people getting hurt and even in some cases, murdered down this route. Thinking back to the headlines, I remember being quite amazed that they couldn’t get out of the alley, although now I understand why. Once you got in, there was no way out. I was completely, hopelessly trapped. Tears started to stream down my pale face, no matter how hard I tried to keep them in. I just wanted to get home and be with my family, not be stuck in this death hole alone.

Not knowing what else to do, I slid down the brick wall beside me. I felt the course material cut through my delicate skin, but decided that this was not important. What was important was getting a phone signal…and getting out. More tears spilt down my cheek as I felt the harsh stinging in my back, the blood gently trickling down my spine, seeming delicate but not feeling like it. I carefully tore a piece of my t-shirt off and wiped my back gently, smearing crimson liquid across it. I winced in pain as it pulsed around my body. I sat in that same place for what seemed like hours, in fact, I didn’t know how long I had spent there before I gradually removed myself from the ground beneath me. Peering around me, I noticed a small crack in the wall that had not been there previously. I frowned and cautiously walked towards it. At closer inspection, it appeared that there was nothing but darkness beyond the crack, and so what had been my spark of hope to get out had been shattered. Unexpectedly, a small eye appeared within the crack. I screamed and jumped back, terrified of what I had just seen.

At this very moment, I witnessed something strange that I had never expected to happen to anyone. The crack began to get larger and larger, until it was almost as tall as me…then out came a creature. The creature was at least twice my size, with large gleaming eyes and sparkling white teeth that seemed brighter than they were due to the light that had appeared from within the crack. Before I could process the fact that there was a huge monster in from of my eyes, it had grabbed my grabbed my arm and started trudging down the alley at snail’s pace, glancing down at me like I was something to put on it’s toast. It’s slimy, yellow skin was snake like and felt unnatural on my own human flesh. Realising what was happening, I struck the beast in the stomach, making it double over in pain and groan loudly. Taking this opportunity, I sprinted down the never ending alley, not knowing what I was going to do when I wasn’t able to get away from it. I kept running until I reached a curve in the alley. At this point, I studied the area behind me, seeing a figure approaching me rapidly.

I tried to cry out for help, but my voice did not utter anything. Instead, I thought of where I had been before the incident, outside the shopping centre, wishing that I could turn back the clock and be there once again. Squeezing my moist eyes shut, I waited for the moment in which the beast would engulf me. Several minutes passed by however, and nothing had happened. Frowning, I released my eyes so that they swung open quickly. I let out a quick gasp of relief and shock when I realised that nothing that was there when my eyes had first shut was at the present location. All around me were gossiping old women and battering adults, moaning about their latest problem and nagging little children that wouldn’t stop screaming the place down. I never thought I would be so happy to see the surroundings that I was in. I quickly located a bench in between a clothes store and a Chinese shop.

I deliberated what had just happened in my mind, thinking about the events that had just happened. It didn’t seem real, but I knew deep inside, that the fear I held was true. It had happened, as unbelievable as it sounded, but I highly doubted that anyone would believe my story if I chose to share it. Deciding to try my best to forget about it, I took a deep breath, inhaling the fresh air around me and walked at a steady pace down the road, heading the long way home. This, I thought had be an eventful day, and nothing would ever replace it.

The Chase-An Example of Descriptive Writing. (2016, Mar 12). Retrieved from https://studymoose.com/the-chase-an-example-of-descriptive-writing-essay 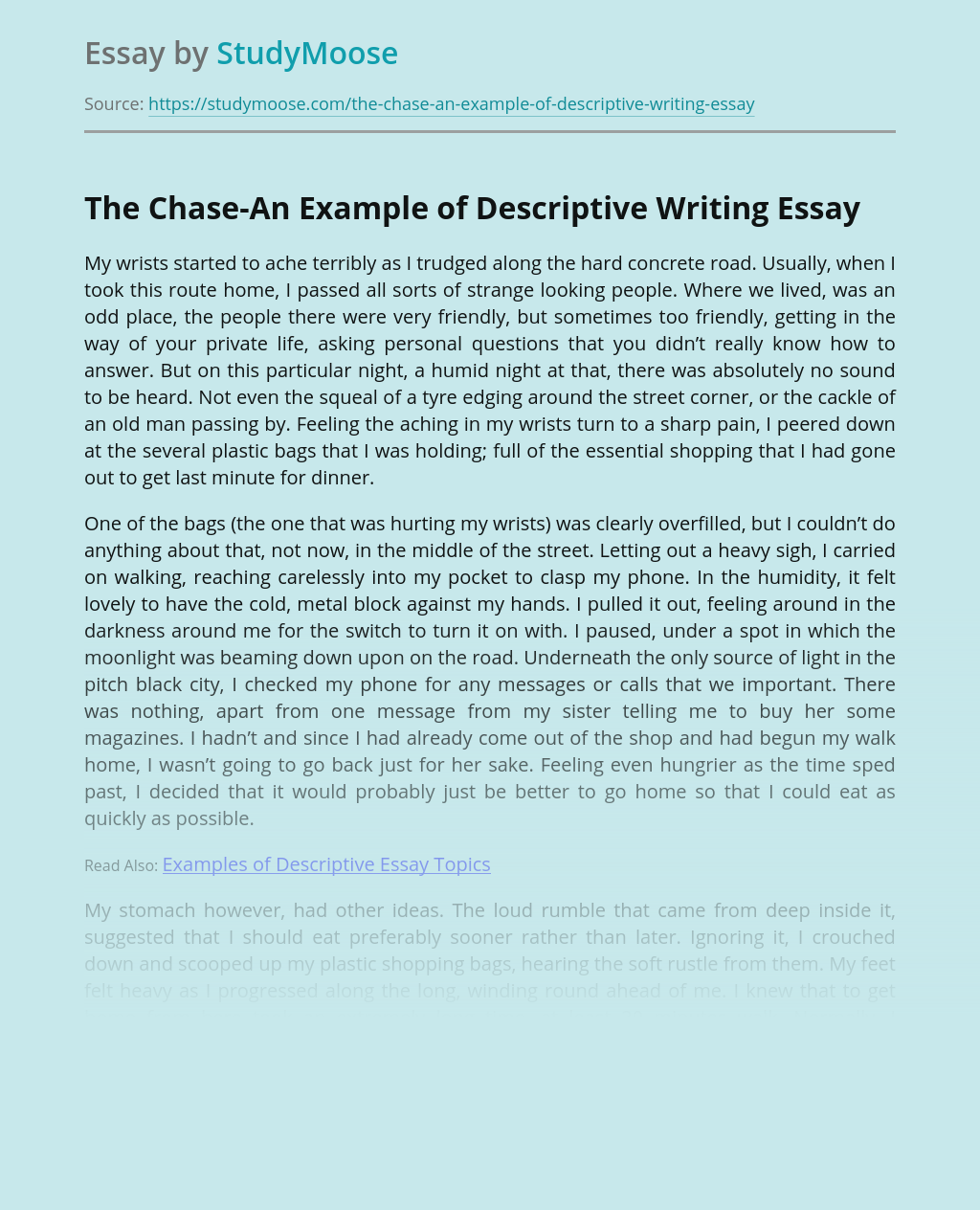 Turn in your highest-quality paper
Get a qualified writer to help you with
“ The Chase-An Example of Descriptive Writing ”
Get high-quality paper
Helping students since 2015
Stay Safe, Stay Original