The causes, effects and solutions of divorce

Many people get divorced for many reasons. There are many causes and many effects to divorce. There are proactive and reactive solutions to prevent divorce.

Turn in your highest-quality paper
Get a qualified writer to help you with
“ The causes, effects and solutions of divorce ”
Get high-quality paper
NEW! AI matching with writer

Divorces in New York in the year 2000 were 62,794. Men the age of 45 that are married, the relationship ends in divorce. Women’s first marriage ends in divorce and the age of woman is 60. Divorces happen either because there is no love in the relationship and the marriage wasn’t a good choice. Another reason why a marriage doesn’t work out is because of a baby that was born before the marriage. The father wanted to take care of the baby but in order to take care of the baby the father needed to get married.

But after a while they parents start to fight and the kid is in the middle of the controversy.

While in the middle of this no one is paying any attention to the baby and the baby isn’t receiving any trust from the parents. So the baby won’t learn to trust anyone in his life. When the kid grows up and their parents are still fighting then the kid will start to develop mental problems like anger short tempers, loneliness, not many friends, and the main probability are the social problems that will affect the kid in a very negative way.

The kid can become a very disturbed person. Many kids grow up with a father and mother but some don’t because either the father or the mother isn’t there in the kids’ life. Some fathers don’t even care about their kids and don’t want them so they just forget about them and leave the kid behind with the mother. Kids everyday go through life with at least a father or mother, or both, but not everyone has a mother and a father living in the same house because they don’t get along together or never got married and the marriage factor comes into play and the father doesn’t want to get married and he has a kid to look after but can’t then eventually forgets about their kid.

But he never really forgets about his son or daughter because its stuck in the back of his mind and starts to eat away at his mind. At this point the mother of the kid is stuck paying for food, clothes, diapers, and other supplies for the baby. Plus the other expenses for the house/apartment, electric and gas, water bill, etc. In this situation the mother takes the father to court and asks or demands the father to pay child support. Usually the mother wins the decision and gets the child support from the father to help the kid. After a while as the baby is growing up he/she is going to start asking questions about his father and where he is.

The mother probably wont tell the kid until he/she is old enough to understand everything. Finding out what the problem is, is easiest part. Finding the solution to the kids’ emotional problems is the hardest part. There are many problems with divorce one is economical and the other is social. The economic problem is that divorce is very expensive. The court costs and the paperwork alone is the most expensive on both parts. On the fathers part the child support is the killer that takes up a lot of the weekly income. The social problem is that kids develop anger and develop ideas that there is no one that actually trusts the kid.

The effects of divorce are that the kid starts to hate the world because of the way he or she was treated when as an adolescent or even younger. There is also evidence that indicates that children whose parents divorce more than once are worse off than children that experienced one parental divorce. The yelling and screaming can affect the kid in school and at home. In mental ways and social ways. The kid might not want to talk to other people may be shy and inattentive and acts up in school. Individual adult reactions to divorce and separation vary. Children’s reactions vary also, depending on…

·The amount of involvement with the nonresidential parent;

·The situation before the divorce or separation;

·The residential parent’s ease in adjusting to the divorce;

·Parenting skills of both parents, agreement on child rearing, and discipline;

·Approval and love from both parents;

·Openness to discussing the divorce with parents;

·Degree of conflict between parents;

The fear of abandonment can cause many problems for the child. The fear of already lost one parent they don’t want to lose another. Arguments and tension between parents may make children feel guilty, angry, and alone. Trying to make the children take sides or turn against the other parent creates confusion for the children and places them in the middle of an adult struggle. 42% of the middle-class children from the Wallerstein study either did not go to college, or left before getting a degree.

Only 67% attended college – 85% of the other children in their high schools did. Here’s some other numbers, while I’m at it (they come from a study by Princeton sociologist Sara McLanahan, and are not, I believe, restricted only to the middle class): white girls from single-parent families are 53% more likely to marry in their teens, 92% more likely to themselves divorce, 111% more likely to give birth before they’re 20, and 164% more likely to have children out of wedlock. For black girls, the figures are even higher.

Some solutions to problems in the home are to go to marriage counseling before going to get married, so the parents can see if getting married is actually right for them. There are only a few couples that actually stay together until death. In the marriage vows it says, “Until death do us part,” many people either cheat or don’t keep their vows sacred. When couples are fighting constantly they should not have the kid around. Most couples fight when the kid is only about at least 10ft away. The solution to the problem of divorce is to make sure that the person that someone loves really loves that person in return. Trust is always important in a relationship, so is love, and care. Another solution is private mediation that is cheaper than going to court and can keep your private life out of the courtroom.

Therefore divorce does have many bad effects and solutions. Going through divorce is a troubling process that is socially and economically troubling. When people get married there should be a law that no one can get divorced.

The causes, effects and solutions of divorce. (2016, Jun 19). Retrieved from https://studymoose.com/the-causes-effects-and-solutions-of-divorce-essay 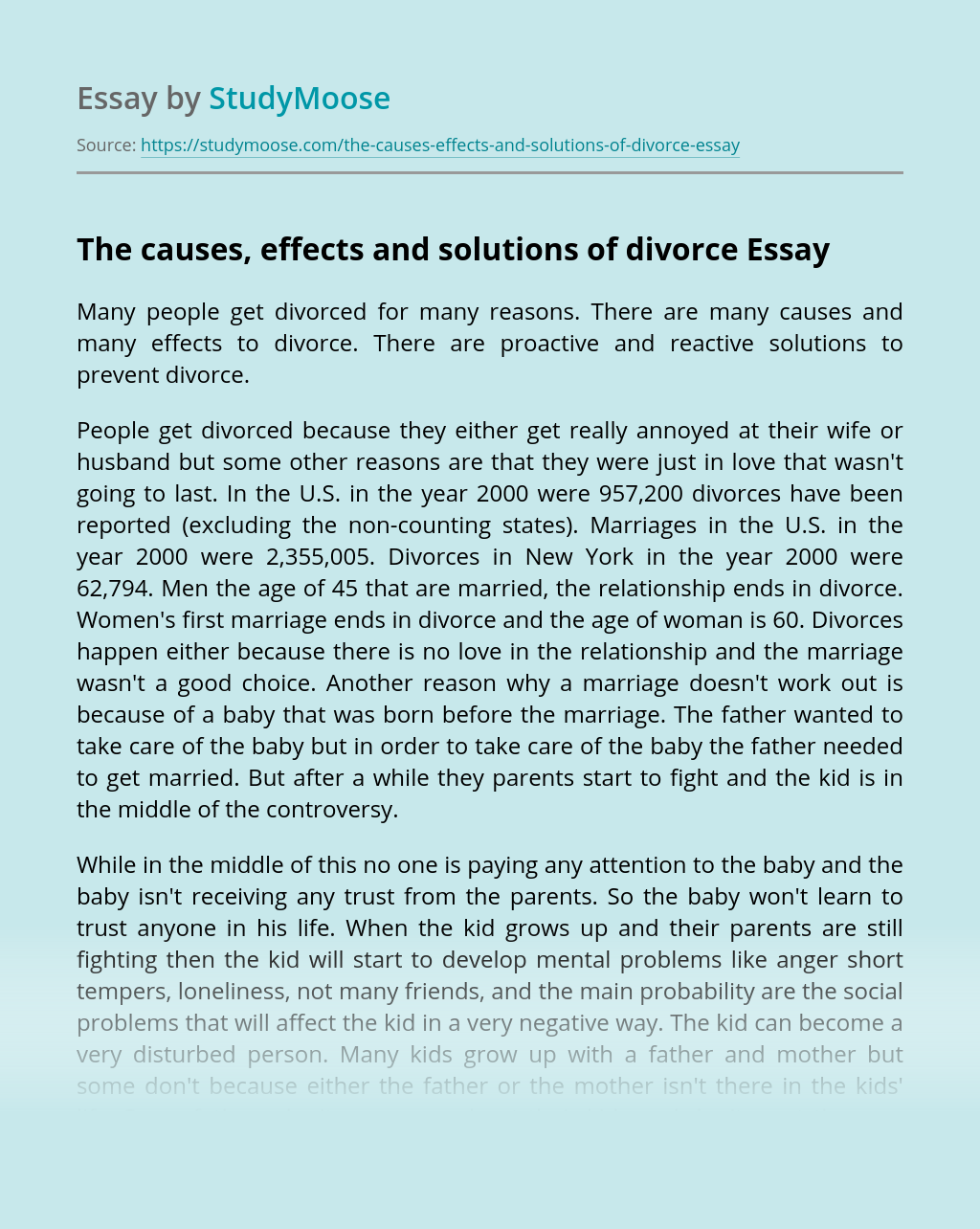 Turn in your highest-quality paper
Get a qualified writer to help you with
“ The causes, effects and solutions of divorce ”
Get high-quality paper
Helping students since 2015
Stay Safe, Stay Original