A discussion of Holden Caulfield’s perception and gradual acceptance of the “real” world in J.D. Salinger’s “The Catcher in the Rye”.

In The Catcher in the Rye, Holden views the world as an evil and corrupt place where there is no peace. This perception of the world does not change significantly through the novel. However as the novel progresses, Holden gradually comes to the realization that he is powerless to change this. During the short period of Holden’s life covered in this book, “Holden does succeed in making us perceive that the world is crazy”.

Don't use plagiarized sources. Get your custom essay on
“ Carousel Gold Ring Catcher In The Rye ”
Get custom paper
NEW! smart matching with writer

1 Shortly after Holden leaves Pencey Prep he checks in to the Edmont Hotel. This is where Holden’s turmoil begins. Holden spends the following evening in this hotel which was “full of perverts and morons. (There were) screwballs all over the place.”2 His situation only deteriorates from this point on as the more he looks around this world, the more depressing life seems.

Around every corner Holden sees evil. He looks out on a world which appears completely immoral and unscrupulous. The three days we learn of from the novel place a distressed Holden in the vicinity of Manhattan. The city is decked with decorations and holiday splendor, yet, much to Holden’s despair “seldom yields any occasions of peace, charity or even genuine merriment.”3 Holden is surrounded by what he views as drunks, perverts, morons and screwballs. These convictions which Holden holds waver very momentarily during only one particular scene in the book.

The scene is that with Mr. Antolini. After Mr. Antolini patted Holden on the head while he was sleeping, Holden jumped up and ran out thinking that Mr. Antolini was a pervert as well. This is the only time during the novel where Holden thinks twice about considering someone as a pervert. After reviewing Mr. Antolini, Holden finally concludes that maybe he wasn’t making a “flitty” pass at him. Maybe he just like patting guys heads as they sleep. This is really the only time in the novel where Holden actually considers a positive side. This event does not constitute a significant change. As Holden himself says, “It’s not too bad when the sun’s out, but the sun only comes out when it feels like coming out.”4 The sun of course is a reference to decency through the common association of light and goodness. His perception of the world remains the same. The one conviction that does change during the novel is Holden’s belief that he can change the world. On his date with Sally, Holden reveals his feelings. “Did you ever get fed up?… I mean did you ever get scared that everything was going to go lousy unless you did something…”5 Holden goes through several plans. Holden at one point contemplates heading out west where he will pretend to be a deaf-mute and live a quiet life. At another point Holden proposes to Sally to escape this world with him. It is finally to his younger sister Phoebe that Holden reveals his ultimate plan. Although Holden describes the situation in a very picturesque and symbolic manner he essentially tells Phoebe that he wants to prevent children from growing up. He blames the world’s corruption on adults and believes that when he stops the children from growing up he will preserve their innocence and save the world. It takes most of the book before Holden begins to realize that he is helpless to stop this corruption. Finally, he realizes that not only is there nothing that he can do, but there is nowhere he can go to hide from it. Holden takes awhile to comprehend these concepts. One good example is when Holden is delivering the note to his sister. He encounters a “fuck-you” written on the wall. Holden careful rubs this off with his hand so as to protect the innocent children from reading it. Later on he finds “fuck-you” scratched into the surface with a knife. He discovers that he can’t efface this one. Even in the timeless peace of the Egyptian tomb room at the museum there is an un-erasable “fuck-you.” This incident is the beginning of Holden’s realization that his dreams are infeasible.6 Ironically enough, it is one of the “innocent” children that he is trying to protect who helps him come to terms with this realization. It is Phoebe who challenges his plan to escape out west. As he is telling Phoebe that she can not run away, he discovers that he too can not run away. “You can’t ever find a place that is nice and peaceful, because there isn’t any.”7 The final break-down comes near the end of the book when he is watching Phoebe on the carousel. All the kids kept trying to grab for the gold ring, and so was old Phoebe, and I was sort of afraid she’d fall off the goddam horse, but I didn’t say anything or do anything. The thing with kids is, if they want to grab for the gold ring, you have to let them do it, and not say anything. If they fall off, they fall off, but it’s bad if you say anything to them.8 In the above passage from the novel, Holden hits the final breakdown. Being “the catcher” becomes obviously unrealistic. The gold rings are ironically not gold but really brass-plated iron. The gold rings are symbols of the corrupted world which always “wears” a shiny surface to hide its evil. It is at this point that Holden sees that he can not stop children from growing up and therefore losing their innocence. They will fall if they fall, there is nothing that can be done. Shortly after this point Holden has his nervous breakdown. His breakdown is due to this depressing realization that the world is corrupt and filled with evil. He knows now with a sickening certainty that he is powerless to stop both evil and maturation. As a matter of fact, it is “bad” to do so. 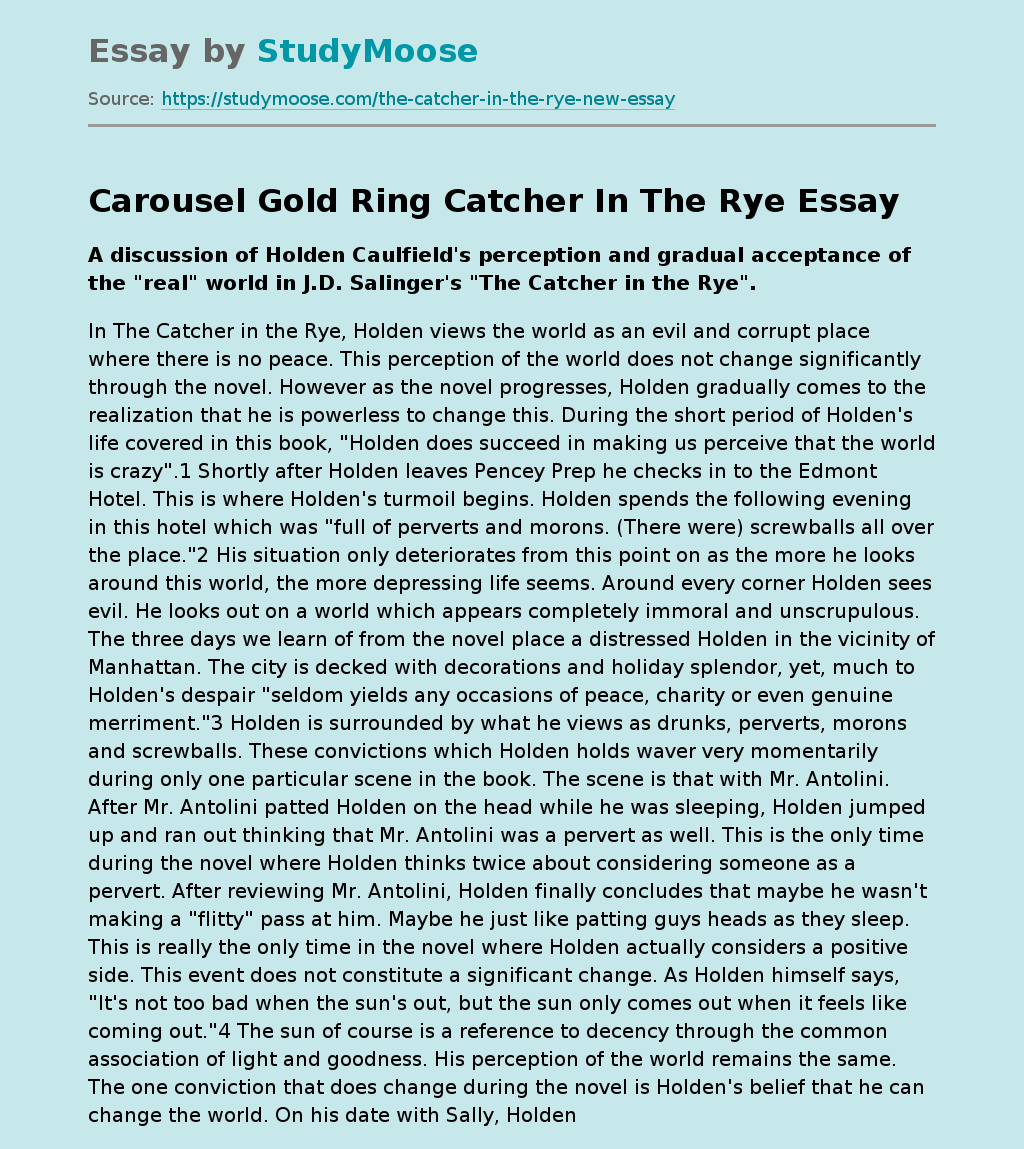