Taken in by a well-to-do family and offered a second chance at life, a homeless teen grows to become the star athlete projected to be the first pick at the NFL draft in this sports-themed comedy drama inspired by author Michael Lewis’ best-seller The Blind Side: Evolution of a Game. Michael Oher was living on the streets when he was welcomed into the home of a conservative suburban family, but over time he matured into a talented athlete. As the NFL draft approaches, fans and sports radio personalities alike speculate that Oher will be the hottest pick of the year.

Don't use plagiarized sources. Get your custom essay on
“ The Blind Side ”
Get custom paper
NEW! smart matching with writer

Sandra Bullock stars in a film written and directed by John Lee Hancock (The Rookie, the Alamo). ~ Jason Buchanan, Rovi Rating, 8-10 Content and explanation of why you chose this text for your AOS The blind side is inspirational movie about a struggling character named Michael Oher. He lives in a low socio- economic neighborhood where everyone’s broke, run down and living off the doll.

Proficient in: The Blind Side Movie

A lady known as Leigh Anne Tuohy notices that Michael is struggling. Leigh being a rich white lady and being well known for getting her way starts to help Michael.

I chose this text because it demonstrates how people can change perspectives no matter what race, religion, economic status or appearance.

This text explains how people should view others instead of just reading a book by its cover. It also shows how far people are willing to change their perspective on others an example of this would be, when Leigh is around her friends. They are worried that Leigh is taking Michael in at a rapid rate and not thinking about the consequences. They are taking Michaels appearance and trying to use it against Leigh “I think, what you’re doing is so great. To open up your home… to him, Honey, you’re changing that boy’s life. No. He’s changing mine.

That’s awesome for you but what about Collins? What about Collins? Aren’t you worried, I mean, even just a little, He’s a boy, a large, black boy, sleeping under the same roof. Shame on you! ” This is an example of how Leigh defended Michael against her friends. It is showing that Leigh is slowly changing and is starting to realise that it’s not always about her, her friends all her committees that she’s associated with. She also realises that people are starting to notice what she is doing and they are worried. Analysis of Textual features: The Blindside’ is an excellent text that explores the concept of changing perspectives, especially socially and personally. Both of these of these features are explored through the characters of Michael Oher and Leigh Anne Tuohy. Hancock uses Mise en Scene in the opening sequence to symbolise journey of the protagonist. This technique conveys the disparity of socio-economic status within the one town, for instance, in the ghetto, a hobo pushes a trolley full of junk and in the richer suburbs a woman pushes her child in a pram.

This is important because it shows the protagonist’s (Michael Oher) future journey from low to high socio-economic status. The use of a close-up shot in this scene helps the audience to empathies with Leigh’s realisation that it’s not just about changing Michael’s life, but that they need to start helping anyone who is in the same category as Michael. The close-up shot is supported by the dialogue, Characterisation tracks the development of the character and is important because it demonstrates the journey and progress the character makes within the narrative.

This is clearly shown through Leigh Anne’s costume, where the first time we see her she wears pure, stark white, but as the film moves on she becomes more casual which shows that she has changed from the beginning of the movie. What the text conveys about the Area of study: In order to change the world, one must first change themselves – as Ghandi stated “Be the change you want to see. ” Leigh Anne Tuohy demonstrates this concept when she states, “You know what I think we should do? We should start a charity for kids like Michael…

Lord knows that school could use a little colour. Michael’s like a fly in the milk at that place. ”This demonstrates that Leigh’s realisation that it’s not just about helping Michael, but that they need to start helping everyone who is in the same category as Michael. Leigh wants to oragnise a charity to get kids like Michael and to get their lives on track. Leigh is changing her perspective as she is realising that Michael is the only dark kid in the school and is the biggest. She also wants Michael to fit in by not looking like an individual.

At the time Michael hasn’t opened up and is still very quiet and shy. He shows this through a letter he wrote about himself, which a teacher noticed, “He knows it, He threw this in the trashcan. “I look and I see white everywhere: white walls, white floors, and a lot of white people. The teachers do not know I have no idea of anything they are talking about. I do not want to listen to anyone, especially the teachers. They are giving homework and expecting me to do problems on my own. I have never done homework in my life.

I go to the bathroom, look in the mirror and say, “This is not Michael Oher. ” He entitled it “White Walls. ” At the time Michael wants to just give up. It shows that he isn’t prepared to change. He also knows that he is an individual and most people are afraid because of his appearance. Through the movie Michael starts gaining confidence an example would be, when Michael goes to the store with Leigh. Leigh is afraid because she is out her comfort zone and is new to Michael’s area. “I’ve lived in Memphis my whole life and never been anywhere near here.

You’re going to take care of me, right? I got your back. ” This demonstrates that Michael is willing to protect Leigh Anne. This is showing that Michael is gaining confidence and is starting transform. At the last scenes of the movie, Michael opens up and tells the investigator, “I want to go there because that’s where my family went (old miss)”. This shows that Michael has completely changed because he backs up his new family (Tuohy family). He tells the investigator and it that he has respect for his new family. 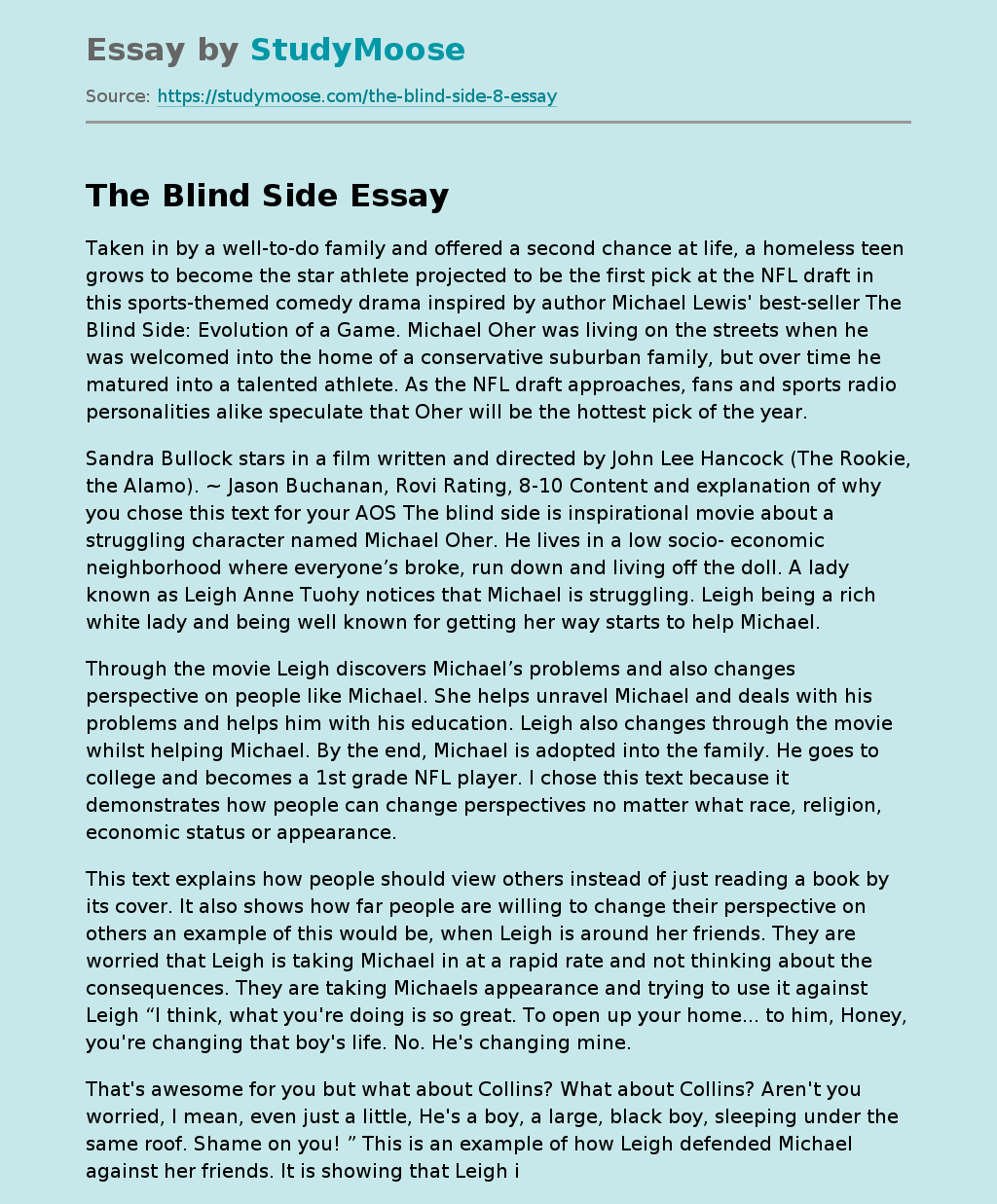