Education in the largest sense is any act or experience that has a formative effect on the mind, character or physical ability of an individual. In its technical sense, education is the process by which society deliberately transmits its accumulated knowledge, skills and values from one generation to another.

In sociology we have various schools of thoughts or theories and each of these have their own view on the impact of sociology on “life chances” Functionalist one of the “theories” of sociology are mainly concerned with the function of education to society and to seek solution to the following questions, “what is the relevance of education to the social system and “what are the relationship between education and economic system”.

Don't use plagiarized sources. Get your custom essay on
“ How Education Shapes Life Chances? ”
Get custom paper
NEW! smart matching with writer

The functionalist believe strongly in value consensus, value consensus is a social contract entered into by members of the society on how best they can leave together.

They believe education is aimed to produce social stability, to keep society smooth and to resolve conflict.

In the words of a functionalist the individual has to submit to this higher order, which exist outside them and which was there before they were born and will continue after their deaths. That goes to say that the functionalist believes that every human being should succumb to this great order since the society is greater than any individual.

Moore and Davis (2006) claimed that education carry’s out three major far-reaching functions which are firstly, socialization, where youths per take in key cultural values such as achievement, individualism, competition, equality of opportunity, social solidarity, democracy and religious morality.

“Emile Durkheim” on the other hand argues that increase in individuality has an optimistic relationship to deviancy and could threaten social solidarity among members of the society and especially the youth who are more prone to these circumstances.

But “Talcott Parsons” an American sociologist believes that the main social significance of education is its capacity to channel a viaduct between the family and broader society by aiding children to drop the particularistic standard of the family and adapt to the universalistic values of the wider society, which is solely grounded on achievement and not attribution, since all students are provided with equal chances. Functionalist Davies and Moore argued further as their second point that “meritocracy” influences success and failure and this would show the position of all individual level.

Highly endowed and skilled persons would take up the most tasking challenges and would be sufficiently compensated. Making some people above or placed high on the social ladder, as every student is handed the same equivalent opportunity to prove their talent they won’t have the feel swindled for any social inequality that would be produced. So no matter your class or gender, race so far you are possess any skill and you are willing and able to strive hard you would succeed in life. Talcott Parsons also believed that education is an instrument for the assigning of roles in the society.

Examinations and qualifications are created to show, establish and to make known of students talents to skill and capacities to the career which is best well-matched for them. The school is therefore a tool to assign these positions hence the school is a “microcosm of macrocosm”. In reference to the functionalist education teaches skill need for industrial society, it might be general skill that everyone requires such as numeracy and literacy or the specific skill needed for particular work. For Marxists the education system is seen as an important part of the superstructure in society.

This is along with other institutions such as the media, religion and the family. They also argue that education does not give everybody a fair chance and that it uses the “alienation of schoolwork”, (the idea that children will do the work if they are rewarding for doing so), to socially control people until they are ready for “exploitation” in the world of work. Schools are considered to be unfair on working-class children because they are generally middle-class institutions and so middle-class children will generally do better.

Marxists also strongly believe that “the hidden curriculum” is being used too strongly by schools. By teaching pupils to follow instructions (e. g. “sir” and “miss” and folding their arms) they are preparing them for the “exploitation” during work of when being asked to do something and then automatically doing it. This means that workers could be “used” in the process and then fined out about the capitalist system that we live in the hard way.

While Marxists do share many ideas of functionalists e. g.the fact that education prepares us for out acceptance of the values of society they also see how the education system is alienating children. Functionalists, on the other hand, seem unable to see this and believe that the education system can only do well to children by teaching them norms and values. The interactionist theory believes that the teacher is the most significant tool to pupil’s educational achievement. It implies that teaches assess pupils not by ability or intelligence, but by traits that relates to class, gender and ethnicity, such as attitude, appearance and behavior.

According to an internationalist the way pupils are influenced by teachers include: labeling-involves two people in an interaction with one have the power to label stick on the other. For example when teacher tag students as “smart and bright” or as “troublemakers and lazy” this forms a mirror through which the students skills and performance is viewed, when there is an occurrence of any mishap in the school those labeled as trouble makers would be called first also when the teachers when marking the works of those label bright tend to have pity for them.

A This can cause what is known as self-fulfilling prophecy; this signifies a situation whereby an individual student will behave in the way that he or she has been labeled. For instance the bright labeled children would have a high esteem while others would be discouraged and may not prepare properly for school work and some may resolve into cheating and this would result into trouble. Also students might have different teachers and therefore each teacher might have a different labeling for the same child .

Peer groups label might have a different label from that of the teachers, for example the teacher label some students as smart and bright but in peer group label they can be labeled as nerd or dweebs and lose respect from peers. Students also label teachers normally in accordance to their strictness or openness, rule enforcement, punishments given and the amount of worked handed to the students by the teachers this would determine which category either good or bad is the label for the teacher.

These labels can be negotiated, that is the ‘bright’ child might start misbehaving or the ‘trouble-maker’ might turn , Life chances refer to the opportunities open to individuals to better the quality of life of themselves and their families. Therefore this definition suggest that there are opportunities available for individuals and families to improve their lifestyles, and suggests that this is possible if there is no poverty, and for people to be socially inclusive. The concept was introduced by German sociologist Max Weber.

These opportunities refer to length to which an individual gain’s access to resources, such as food, clothing, shelter, health care and our main area of study education. How does education (shape) people’s life chances? The question appears to be seeking an investigation into the relationship between the education a person receives and the opportunities which it provides. The (key) words seem to be education, shape and life chances. shape strikes me as a very definite word, defined in the (merriam-webster dictionary as meaning, form,create, especially. to give a particular form or shape to).

For the purposes of this essay I am going to look at education in the sense of learning opportunities provided by the state and concentrate on issues of social class, race and gender. Life chances is a very vague phrase which could be construed as having a variety of different meanings, but in this case I would interpret it to mean opportunities of economic and social (That goes to say that education is an opportunity given to an inidivial to improve his or her life quality). Aside the fact that education might be considered boring, expensive, stressful and time consuming.

From a personal view I (believe) that education surely does improve or aids to better one’s life chance, education Serve the ruling class to shape people’s thinking, also to improve the level of people so that from a natural person into a social person, education brought (rise of r technological advancements) , education brings about understanding and this has helped in settlements of many disputes also wars amongst countries, education helps to improve the welfare of the individual and the society, It promotes civilized, progressive, competent and efficient development of the individual and the society and lastly Dissemination of culture, transforming culture, and create a culture, to intellectuals to raise people’s literacy.

These and many more is how education has helped. Education also (comes) in, in its relation to the economy. 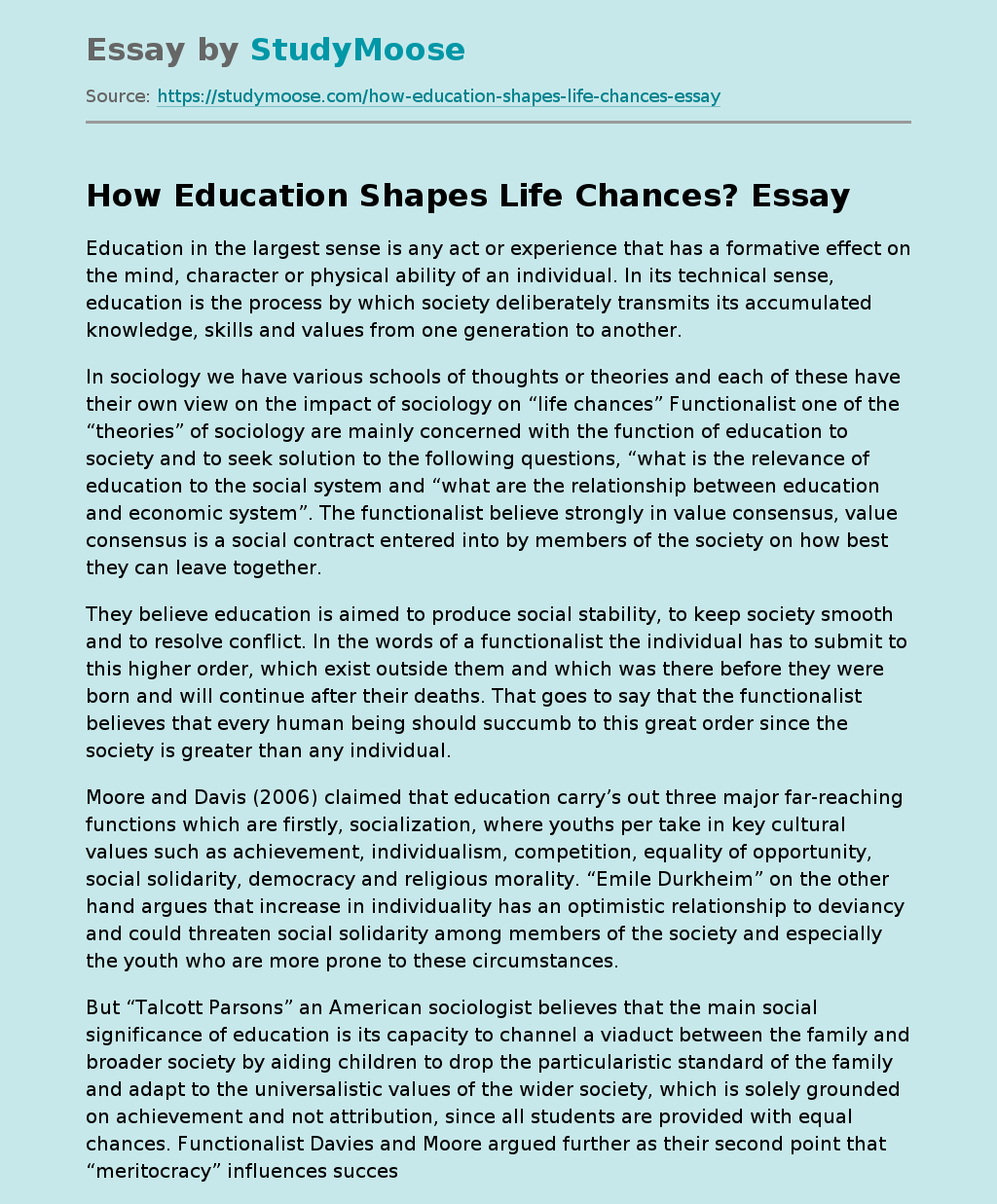