The Birds: Movies Vs. Short Stories

Both Alfred Hitchcock and Daphne du Maurier had a version of a story titled The Birds. Though both stories share a name theyre are completely different. One is a short story by Daphne du Maurier about a man, Nat, and his family who live and England and are attacked by birds. The other a movie about a woman, Melanie Daniels, and a man, Mitch Brenam, and his family who live in California and are also attacked by birds. The reason Alfred Hitchcock changed the original location of the birds is to change the mood and the detailed plot of the story, because du Mauriers version sets a feeling of claustrophobia, Alfred Hitchcocks version is made to feel open; in the Hitchcock version the frightening parts are made to be unexpected and in the short story the frightening parts are made to feel tragic; California is perceived as always sunny, whereas England is perceived as a dark place.

Don't use plagiarized sources. Get your custom essay on
“ The Birds: Movies Vs. Short Stories ”
Get custom paper
NEW! smart matching with writer

The overall feelings of this story differ due to changes in the setting of each.

In the short story version of The Birds the mood is made to feel claustrophobic. De Maurier sets the atmosphere by saying The boards were strong against the windows, and on the chimneys too (du Maurier 72). The purpose of this is to make the reader feel trapped. If the reader feels trapped by the birds, there is a sense of tragedy and no hope for survival. In Hitchcocks version, the setting is open. He does this so that when the birds attack there isnt so much a feeling of tragedy as there is a sudden feeling of fright.

Also the open setting gives a feeling of hope. To give the audience and final sense of relief Hitchcock wrote into the script It looks… it looks clear up ahead, said Mitch at the end of the movie. He said this because the roads were beginning to clear of birds and he knew that Melanie would make it safely to the hospital.

Also, each version has its own overall impression. du Mauriers version is very tragic. The audience feels this tragedy when de Maurier writes He climbed on to the roof also, and fixed boards across every chimney, except the kitchen, (du Maurier 71). At the end of the story the characters board up the house and it gives the reader very little feeling of hope. This makes the reader focus strongly on the mood rather than the action in the story. Such as when The moment the child has dropped, Mitch suddenly looks up. He slams the window as two or three birds crash into the windows. They disappear into the building,(http://www.script-o-rama.com/movie_scripts/b/the-birds-script-screenplay.html, lines 1809-1811) The film has sudden frightening action. Almost always the setting is open, so that there is never a place to hide. Hitchcock does this to excite the audience and leave them with a good impression of him and his film.

Most noticeably each of the stories are set in different cities. Alfred Hitchcock moved the story from its original setting in England. He did this because California is known to be always sunny. With the sunny setting of California he is able to add glamour to his story. Along with the glamour he is able to add a love story into this horror film. . Is it going to snow, dad? she said. Its cold enough. […] No, he said, its not going to snow. This is a black winter, not a white one (de Maurier 51). England was to be perceived as a dark place in this story. Du Maurier was not trying to make anything glamorous or twist in a love story. She wanted to write a story about a tragic event that left England in destruction with no hope at the end.

To change the mood and detailed plot of the story Alfred Hitchcock moved the setting of The Birds from England to California, and by doing this changes Daphne du Mauriers feeling of claustrophobia in a dark space to an open setting, tragic moments seem suddenly frightening and a dark dreary place to a sunny glamours area. He even changed the characters to better suit his story and twist in a love story. Even though both authors share the name of a story and a similar plot they obviously have different ideas on how the tale should be told.

The Birds: Movies Vs. Short Stories. (2016, Jul 25). Retrieved from https://studymoose.com/the-birds-movies-vs-short-stories-essay 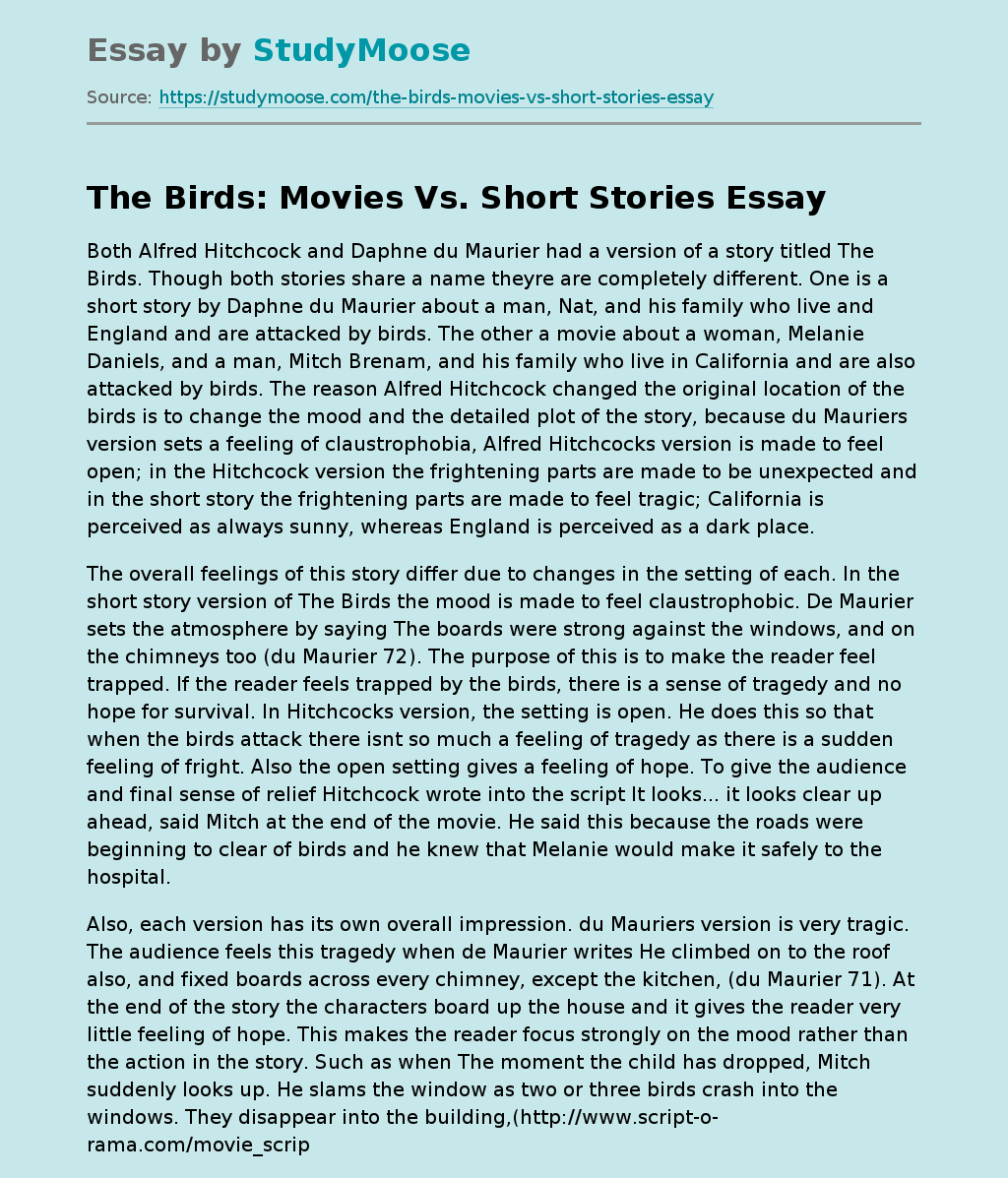