The Bereavement of the Lion-Keeper

Don't use plagiarized sources. Get your custom essay on
“ The Bereavement of the Lion-Keeper ”
Get custom paper
NEW! smart matching with writer

The sad feeling has been suggested even from the title of the poem, using the word “bereavement” which means the state of sorrow over the death of a loved one. The title foreshadows the loss of the Lion-keeper at the end of the poem, so definitely the reader has expected for a sad ending where someone loses his loved one. Throughout the poem, the relationship between the Lion-keeper and the Lion is shown as intimate, by showing them “growing old together” for example.

The Lion-keeper “stayed, long after his pay stopped” to take care of the lion even without being paid, which means his being care to the Lion is sincere, not wishing for something in return. The Lion-keeper can also “stroke his head”, sleep next to it, “wrapped in his warmth”, showing an intimacy which is rarely seen between a human and a lion. He eventually realizes though, that the lion is now old, and is going to die soon because it is “not immortal”, that the death “was bound to happen” “in the course of nature”.

However, even knowing the truth that the die is inevitable, the Lion-keeper is unable to move on when the lion is “asleep”. The inability to let go is emphasized as the line contrasts to other first lines of all five stanzas before, because this line starts with a “but” while the other lines start with a “who”. The contrast highlights the whole line “but who knows no way to let go”, and it makes the reader empathize to the Lion-keeper since many of us has lost our loved ones and the excruciating pain of loss makes us unable to move on, just like the Lion-keeper who is described as “an old man in a city without a lion”.

The universal theme of losing a loved one makes most reader relates easily to the poem as they can put themselves in the Lion-keeper’s shoes and feel his grief and sorrow over his loss. The use of enjambment throughout the poem also makes it easier for the reader to understand and relate to the poem through its simplicity. We can all feel the intimate relationship when the Lion-keeper takes care of the lion, through sick and health, till death do them part. Hence, the loyalty of the Lion-keeper to the lion can make the reader feel sorry for his loss. 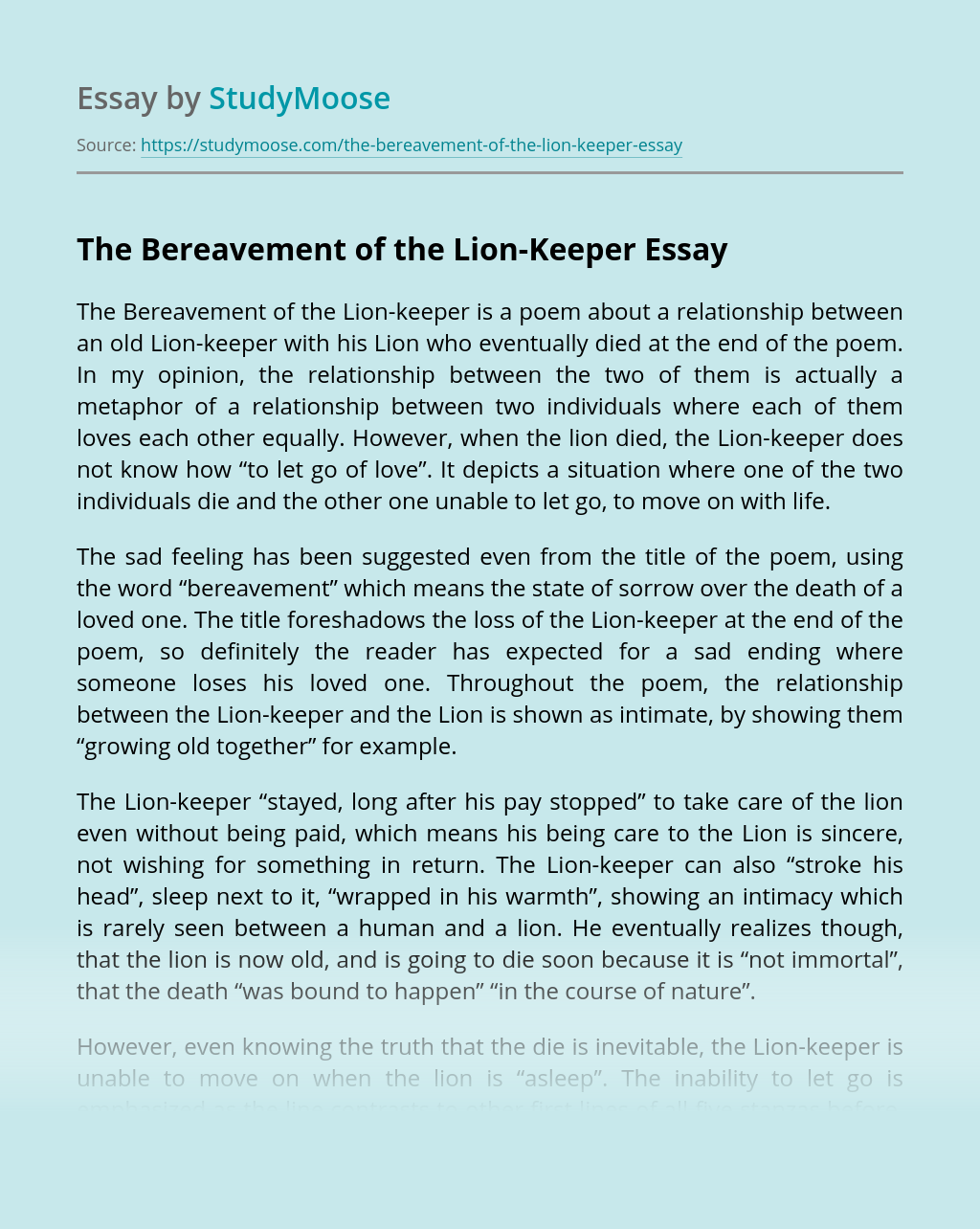