The basic components and types of computer systems

What are the basic components and types of computer systems? Provide some descriptions with your examples.

Don't use plagiarized sources.
Get Your Custom Essay on The basic components and types of computer systems Just from $13,9/Page

The output devices are used to produce the results of the processing done by the computer. The most common output devices include computer screen or monitor, printer, or writing output on CD or DVD. Computer memory or main memory holds the program instructions and data. All data flows are to and from memory.

It is mainly responsible for arithmetic function of addition, subtraction, multiplication and division calculation, logical comparison and decision. Computer files storage devices sometimes called secondary or backing storage is used to store programs and data when they are not being used. Secondary storage is nonvolatile. File devices include hard disk drive, magnetic tape drives, flash drives, and CD or DVD. Control Unit provides the control that enables the computer to take advantage of the speed and capacity of its other components. It controls the sequence of instruction to be executed, controls the flow of data, interpret instructions, and it regulate timing of processor (Brown et al., 2012).

Types of computer systems are categorized into microcomputers, midrange systems, mainframes and supercomputers. Microcomputers are primarily used for personal computing or small business processing. Microcomputers cost from $200 to $4,000, examples of microcomputers are smartphones, tablet PC, desktop PCs, laptop or notebook. Midrange computer systems cost from $4,000 to $1,000,000 with power ranging from 2,500 to 250,000 MFLOPS, its primary use is for departmental computing, midsized business general computing, web server, file server, LAN server. The major players in this category are HP, IBM, Fujitsu and Dell. Mainframes have widest range of applications which can be used for large business general processing of major corporations and government agencies or large web server. Mainframes cost from $500,000 to $20,000,000, it have a very powerful processor, large amount of main memory and a huge storage capacity.

Mainframe computers are very large powerful computer systems that are usually at the heart of a business. They are accessed through one or more terminals. The dominant vendor in this category is IBM other players include Fujitsu and Unisys (Brown et al., 2012). “Supercomputers are the true number-crunchers, with MFLOPS rating in excess of 250,000 and price tags from $1 million to $100 million or more” (Brown et al., 2012, pg.34). Supercomputers are used for many different reasons which include weather forecasting, simulations on researches generated by meteorologist, scientists, chemist and physicist (Brown et al., 2012). United States is currently the leader in supercomputing countries owning over half of the top 500 supercomputers in the world. However, China currently owns the world’s most powerful supercomputer called Tianhe-2 with the speed of 33.86 petaflops (Service, 2013).

The basic components and types of computer systems. (2016, Apr 22). Retrieved from https://studymoose.com/the-basic-components-and-types-of-computer-systems-essay 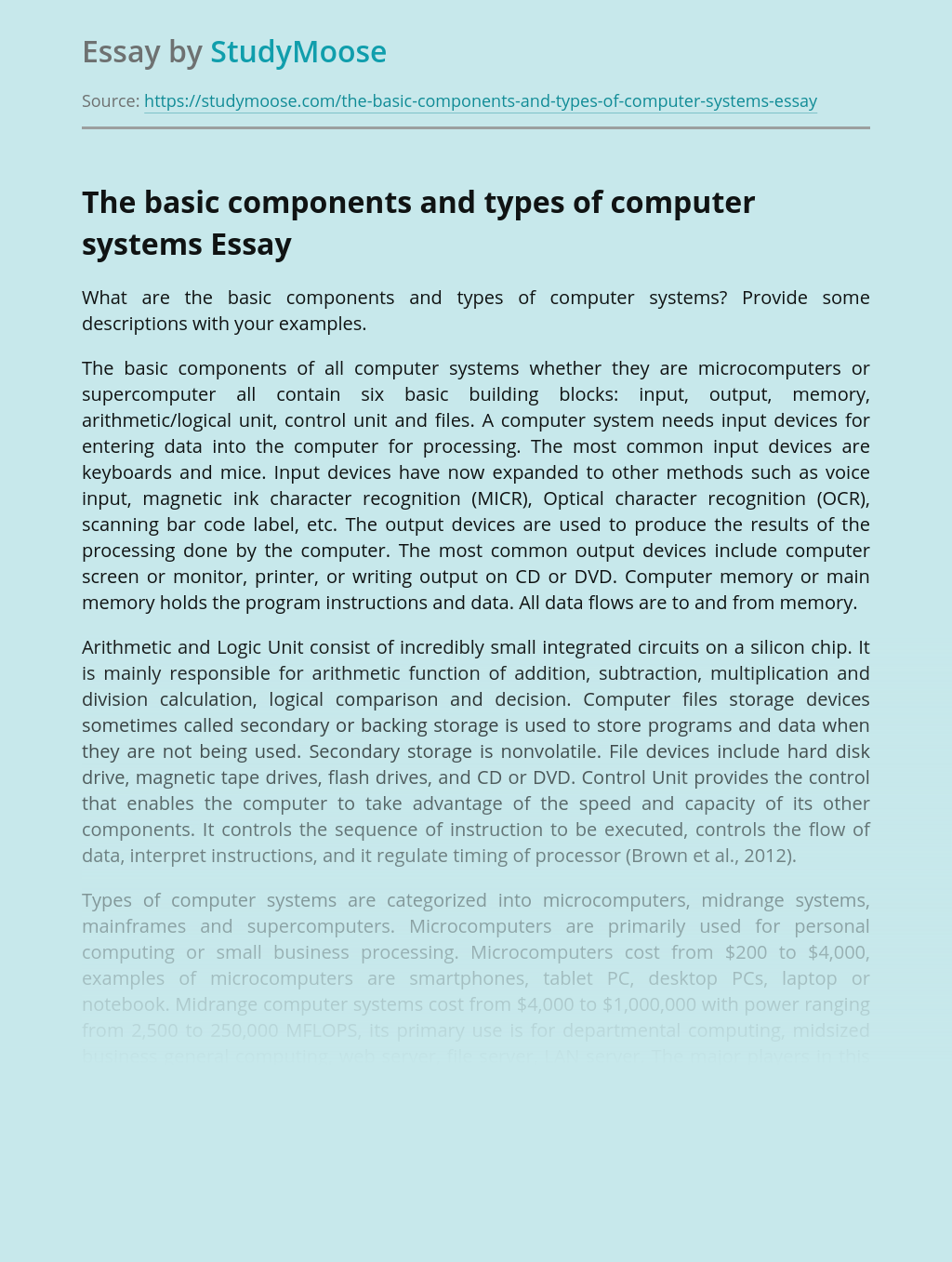 Impact of a Data Classification Standard

Rate this post IMPACT OF A DATA CLASSIFICATION STANDARD Being a mid-level financial investment and consulting firm, we are governed by laws to protect personal data of our customers. To reduce risks and threats the company needs to develop an IT Security Policy Framework that contains four main components: Policy, Standard, Procedures and Guidelines1. This...

Get Essay
Importance of Computer

Rate this post Computer is an electronic device used in almost every field even where it is most unexpected. That is why this age is called as the era of IT. And now we cannot imagine a world without computers. It is made up of two things one is the hardware and other is software....

Rate this post Brisk innovation and globalization have produced great opportunities and alternatives in the marketplace for consumers and business organizations alike. Competitive demands have led to sourcing and manufacturing on a global scale, resulting in a significant rise in product offerings. As businesses grow more multifaceted, so as their supply chains. This paper will...

Our Dependency on Computers

Rate this post When we talk about computers, people often relate computers with modern technologies. Computer is a tool that helps us make things in our life easier. People use computers in business, public services, educations, even entertainment. Our daily activities are more and more based closely on the working of computer. Almost everything we...

Rate this post It is found that repetitive movement by the wrist and arm, which occurs when using a computer mouse, can cause physical injury to the body parts involved. There has been an attempt from injured workers and their representatives, such as OSHA, to pass legislation requiring employers to develop programs that prevent these...