The Advent Of Modern Means Of Communication

Communication has always been critical to the establishment and maintenance of power over distances. From the Persian, the Greek, the Romans and the British, efficient networks of communication were essential for the imposition of imperial authority, as well as for the expansion of international trade and commerce on which these empires were based. Indeed, the extent of the empires can be taken as a efficiency of communication.

Don't use plagiarized sources. Get your custom essay on
“ The Advent Of Modern Means Of Communication ”
Get custom paper
NEW! smart matching with writer

Lets focus on some of the earlier modes of communication.

The News Print: The news paper industry has always played a significant role in the development of social and commercial opinion in society. Even after the invention of the telegraph system the printed mode of communication has not lost its position in the international trade and commerce.

Major news houses such as Reuters(1851), Associated Press (1848), and many more of the early days are still powerful players in the global arena proving that the print media is still going strong. This industry does and annual turnover in access of $45 billion and has a spread of the globe only second to the Internet and the television.

Telegraph: This was the single most important invention of the 19th Century which changed the way people communicated. From its invention in 1837 the telegraph enabled the rapid transmission of information, as well as insuring secrecy and code protection.

The business community was the first to make use of this technology which later spread to the defence and military establishments. This technology was the backbone of the expansion and subsistence of the British Empire.

Spread of the Telegraph.

1865 First line between Europe and India via Turkey was started 1870-1880 Cabling of the English coast and the East Indies coast.

Lets us now look at the technologies the today control the communication arena and affect commerce.

Modern Means of Communication Telecommunication: Unlike the telegraph, the telephones were controlled by the Americans. Following the patent by the Bell Telephone Company (Alexander Bell) in 1877, telephone production increased in the US. Even today the spread of the telephone is phenomenal and all technologies are somewhere or the other, including the Internet, relying on the phenomena.

The telephone has always been improving. From the first copper cables of the 19th century to the fibre optic cables of today the telephone has reinvented itself many a times ushering in the Telecommunication Age. This has allowed companies to spread into areas otherwise in accessible. The telephone greatly reduced the time to convey decisions taken by the head offices of major conglomerates and saved the days which were earlier taken in coding and decoding a telegraph message. From the advent of the telephone commerce has increased by 35%. The start of the telecommunication era has changed communication from a mode of doing business to a independent industry itself. In 1998, the top 10 telecom companies held 86% of the market in telecommunication while the leading 10 computer companies controlled almost 70% of the market. By 1999 the value of mergers & acquisitions in this industry had nearly doubles to $561 billion.

Lets look at some of the technologies that make this possible.

Teleconferencing: This is a means by which individuals or groups located at different places can exchange data, speech, visual material like graphs or diagrams, or moving pictures of themselves. Teleconferencing is made possible by the intgration of computers and communication in such a manner as to form a holistic system which can work in real-time. With the use of telephone lines of higher bandwidth, and use of optical fiber cables this concept has received further boost. This technology can be further classified into; Computer Conferencing.

Similar to the above-mentioned concept, baring the fact that images or data cannot be transmitted.

This concept was introduced to enable the transfer of maps, diagrams and other image files through telephony.

Currently the most advanced form of remote telephony possible. This involves the transfer of audio, visual and presentation material at the same time. This is achieved through the use of Leased telephone lines with bandwidths of well over 2MB in data transfer speed. This makes the participants at various locations simultaneously interact with each other as they would be doing it in the same conference room.

Teletext: This is a form of broadband technology by means of which several pages of textual information can be transmitted on an already existing television channel.

The Delhi Station of Dordarshan provided a teletex service on its 2nd channel, accessible through a decoder. This magazine contains specific pages of information related to trade and commerce, entertainment news etc.

Fax: This involves the transfer of printed or nowadays digital documents and images into electronic pulses. These travel through the normal telephone lines. This technology, along with the advances in video conferencing has greatly reduced the need to travel great distances to finalise a business transaction, or participate in any conference, thus reducing the traveling overheads of companies.

Internet: From the ARPANET in 1969, to the current avtar of the Internet as the most overwhelming communication force, the World Wide Web has come a long way. It took the radio 40 years to reach an audience of 50 million and the television 15 years to do the same fete. But amazingly the Internet crossed the 50 million-coverage mark in 3 years. By the year 2000, the number of users had crossed 320 million promising a growth rate of 1000% annually.

Technological developments, combined with the liberalization of trade has helped the Internet to grow not only as a information tool but also as a means to do business. Trade on the internet has taken hold very quickly. In 1998, companies did $ 43 billion in business with each other over the net. This trade is expected to cross $ 1.4 trillion by the year 2003 according to a 1999 US Government report.

With a growth rate of 40% per annum, the mobile telephone industry is expected t cross the 1 billion customer coverage mark in the next decade. By 1990’s it has established itself as a major industry with revenues crossing $ 155 billion. Major global operators and hardware manufacturers are located in the richest parts of the world.

The North South Divide: NEWSPAPER CIRCULATION PER 1000 PERSONS (1994) NEWSPRINT CONSUMPTION PER PERSON (tons) RADIOS PER 1000 INHABITANTS TV SETS PER 1000 INHABITANTS INTERNET USE (IN %) North 286 21.2 1045 544 88 South 44 1.8 198 153 12 World 96 6 379 236 — A limited telecommunication infrastructure has seriously undermined access to the Internet in the developing countries. In 1998 nearly 88% of the internet users were in the North, home to less than 15% of the world’s population. Such disparities slowdown the growth rate of the Internet revolution. But the scenario is looking up with developing countries like India and China actively participating in controlling the destiny of the WWW.

Lastly, Internet through satellite offers new opportunities for education and trade. As this technology expands and becomes more affordable, distance learning and commerce is likely to become a global phenomenon.

Towards the Future Communication from the message runners to the electronic mail has come a long way. From a means to an industry in its own right, with an annual revenue generation of $ 2.1 trillion, the communication industry plays a very important role in the development of all economies the world over. And as the market leaders say, this is still its nasent stage.

Language is one way of letting others know about ourselves, our feelings, our ideas, our experiences. Difficulties with language and expression can mean difficulties expressing these feelings. A child will then use behaviour as a form of communication. The child’s behaviour is telling us something about them. A child’s problematic or inappropriate behaviour is a sign that he is upset and that something is not right. They are expressing themselves in other ways, like I am feeling anxious or scared. Sometimes, people just lack words to speak and express themselves or sometimes have trouble communicating, because they may not be able to verbally describe the problem or know what to do in a situation. At these times, people may act out their feelings or needs. Children engage in challenging behaviour for a reason.

The purpose may be getting someone’s attention, stopping an activity they don’t like, or satisfying sensory needs — but there is always a reason behind the behaviour, so they move to another alternative of communication which is their behaviour; they may cry or show such a sadness to express that they are upset and annoyed, without even talking about it, but one can notice that through their behaviour. Everybody communicates through behaviour. A baby will cry when she is hungry or wet, just like an adult may yawn when he is tired or bored. Adults and children are communicating something through their behaviour during every moment in every day, even if they are not aware of it. Behaviour may also go in parallel with verbal language in order to communicate.

Communication today is entering a new era. Moving a step away from video conferencing and other such means of one-on-one conversations, the world is today looking today at technologies such as Holographic Meetings. This technology developed utilizing satellite communication and top of the line image recognition and regenerating artificial intelligence synthesis, would render the concept of actual meetings obsolete. This could end up saving trade and commerce millions of Dollars in actual travel and overheads, completing the conception of a Virtual Office.

Next in line would be the GPS (Global Positioning System). This would allow logistic departments to track cargo in real time not relying upon third party information on the status of their containers. All material will travel with its unique coded chip being tracked by satellites all across the world.

Such technological advances will make today’s best technologies obsolete and herald a new revolution in communication.

The Advent Of Modern Means Of Communication. (2016, Jul 14). Retrieved from https://studymoose.com/the-advent-of-modern-means-of-communication-essay 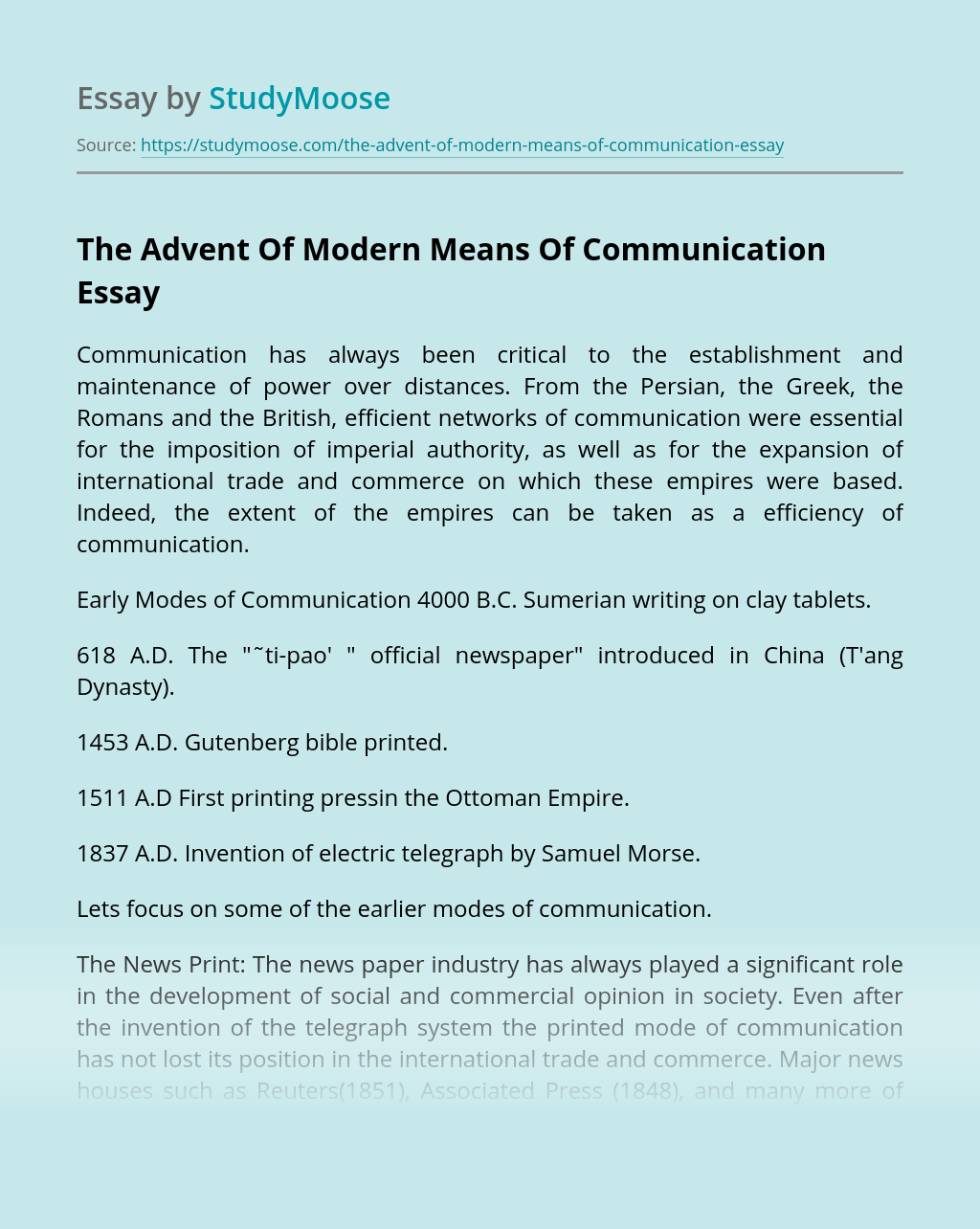