The Achievements of W.E.B Du Bois

William Edward Burghardt Du Bois (February 23, 1868 – August 27, 1963) was an American civil rights activist, leader, Pan-Africanist, sociologist, educator, historian, writer, editor, poet, and scholar. He became a naturalized citizen of Ghana in 1963 at the age of 95. On Feb. 23, 1868, W. E. B. Du Bois was born in Great Barrington, Mass. , where he grew up. During his youth he did some newspaper reporting. In 1884 he graduated as valedictorian from high school.

He got his bachelor of arts from Fisk University in Nashville, Tenn. , in 1888, having spent summers teaching in African American schools in Nashville’s rural areas.

Don't use plagiarized sources. Get your custom essay on
“ The Achievements of W.E.B Du Bois ”
Get custom paper
NEW! smart matching with writer

Du Bois’s life and work were an inseparable mixture of scholarship, protest activity, and polemics.

All of his efforts were geared toward gaining equal treatment for black people in a world dominated by whites and toward marshaling and presenting evidence to refute the myths of racial inferiority. In 1905 Du Bois was a founder and general secretary of the Niagara movement, an African American protest group of scholars and professionals. Du Bois founded and edited the Moon (1906) and the Horizon (1907-1910) as organs for the Niagara movement.

In 1909 Du Bois was among the founders of the National Association for the Advancement of Colored People (NAACP) and from 1910 to 1934 served it as director of publicity and research, a member of the board of directors, and editor of the Crisis, its monthly magazine.

In the Crisis, Du Bois directed a constant stream of agitation–often bitter and sarcastic–at white Americans while serving as a source of information and pride to African Americans. The magazine always published young African American writers.

Racial protest during the decade following World War I focused on securing anti-lynching legislation. During this period the NAACP was the leading protest organization and Du Bois its leading figure. In 1934 Du Bois resigned from the NAACP board and from the Crisis because of his new advocacy of an African American nationalist strategy: African American controlled institutions, schools, and economic cooperatives. This approach opposed the NAACP’s commitment to integration. However, he returned to the NAACP as director of special research from 1944 to 1948.

During this period he was active in placing the grievances of African Americans before the United Nations, serving as a consultant to the UN founding convention (1945) and writing the famous “An Appeal to the World” (1947). Du Bois was also active in behalf of pan-Africanism and concerned with the conditions of people of African descent wherever they lived. In 1900 he attended the First Pan-African Conference held in London, was elected a vice president, and wrote the “Address to the Nations of the World. “

The Niagara movement included a “pan-African department. In 1911 Du Bois attended the First Universal Races Congress in London along with black intellectuals from Africa and the West Indies. Du Bois organized a series of pan-African congresses around the world, in 1919, 1921, 1923, and 1927. The delegations comprised intellectuals from Africa, the West Indies, and the United States. Though resolutions condemning colonialism and calling for alleviation of the oppression of Africans were passed, little concrete action was taken. The Fifth Congress (1945, Manchester, England) elected Du Bois as chairman, but the power was clearly in the hands of younger activists, such as George

Padmore and Kwame Nkrumah, who later became significant in the independence movements of their respective countries. Du Bois’s final pan-African gesture was to take up citizenship in Ghana in 1961 at the request of President Kwame Nkrumah and to begin work as director of the Encyclopedia Africana. Du Bois’s most lasting contribution is his writing. As poet, playwright, novelist, essayist, sociologist, historian, and journalist, he wrote 21 books, edited 15 more, and published over 100 essays and articles.

Only a few of his most significant works will be mentioned here. From 1897 to 1910 Du Bois served as professor of economics and history at Atlanta University, where he organized conferences titled the Atlanta University Studies of the Negro Problem and edited or co-edited 16 of the annual publications, on such topics as The Negro in Business (1899), The Negro Artisan (1902), The Negro Church (1903), Economic Cooperation among Negro Americans (1907), and The Negro American Family (1908).

Other significant publications were The Souls of Black Folk: Essays and Sketches (1903), one of the outstanding collections of essays in American letters, and John Brown (1909), a sympathetic portrayal published in the American Crisis Biographies series. Du Bois also wrote two novels, The Quest of the Silver Fleece (1911) and Dark Princess: A Romance (1928); a book of essays and poetry, Darkwater: Voices from within the Veil (1920); and two histories of black people, The Negro (1915) and The Gift of Black Folk: Negroes in the Making of America (1924).

From 1934 to 1944 Du Bois was chairman of the department of sociology at Atlanta University. In 1940 he founded Phylon, a social science quarterly. Black Reconstruction in America, 1860-1880 (1935), perhaps his most significant historical work, details the role of African Americans in American society, specifically during the Reconstruction period. The book was criticized for its use of Marxist concepts and for its attacks on the racist character of much of American historiography.

Du Bois received many honorary degrees, was a fellow and life member of the American Association for the Advancement of Science, and a member of the National Institute of Arts and Letters. He was the outstanding African American intellectual of his period in America. Du Bois died in Ghana on Aug. 27, 1963, on the eve of the civil rights march in Washington, D. C. He was given a state funeral, at which Kwame Nkrumah remarked that he was “a phenomenon. “

The Achievements of W.E.B Du Bois. (2016, Oct 02). Retrieved from https://studymoose.com/the-achievements-of-w-e-b-du-bois-essay 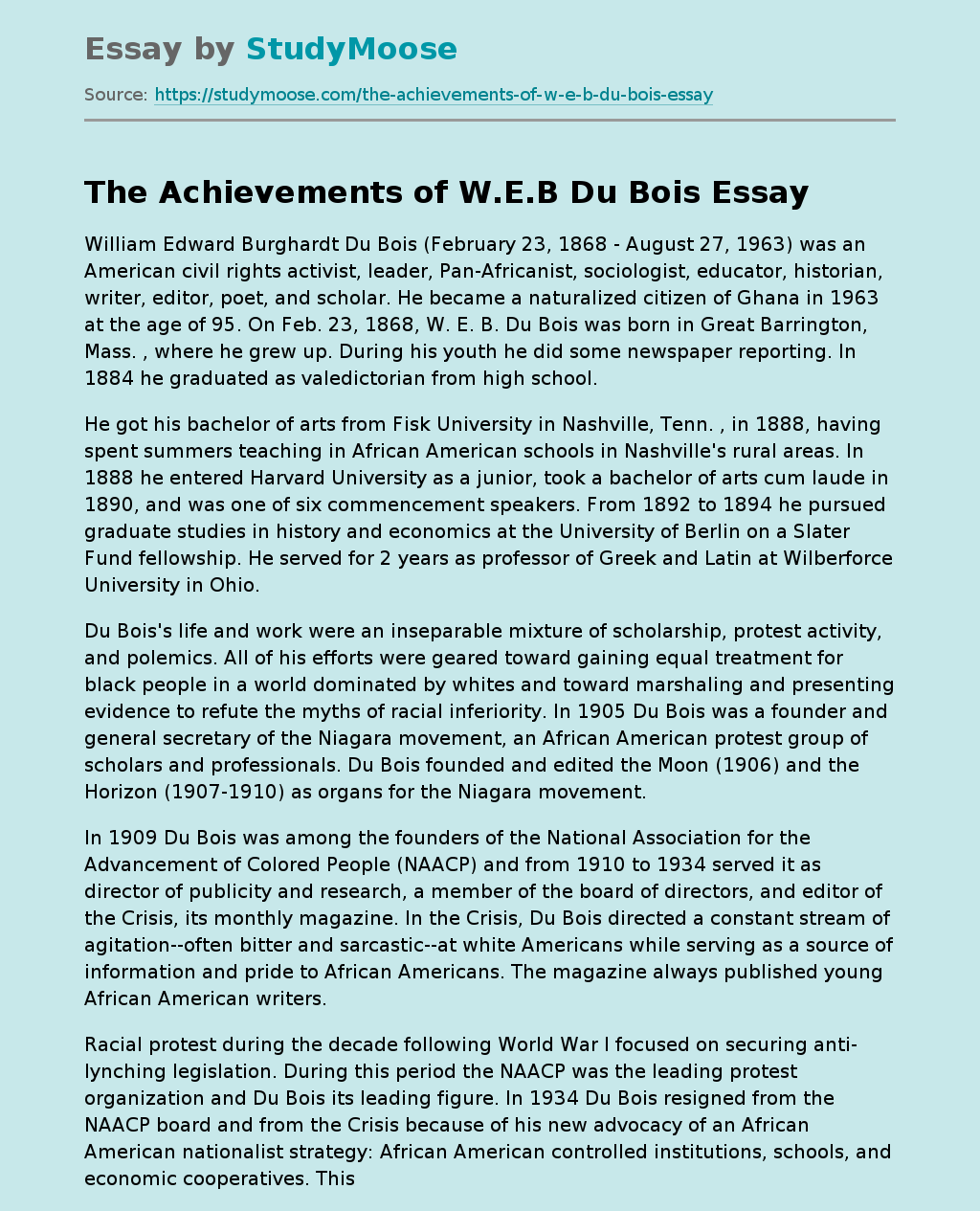