Susan Smith was convicted on July 22, 1995 for murdering her sons and sentenced to life in prison. Initially she told the police an African American man stole her car and abducted her two children.

Though this ethnically sensitive case, as told by Susan Smith, initially attracted sympathy for her, eventually after extensive investigation and prosecution she confessed her crime.

If we study the case minutely then we reach at a conclusion that it is a type of Dependent Personality Disorder according to DSM – IV-TR Multiaxial System which is widely used for diagnosis and treatment of different types of mental disorders and following this we also feel that she needed proper treatments like Psychotherapy, Medication, support and sufficient health services.

Don't use plagiarized sources. Get your custom essay on
“ Susan Smith: Diagnosis and Treatment ”
Get custom paper
NEW! smart matching with writer

The incident drew world wide attention immediately due to its tragic nature. Initially she put the blame on an African American making the whole the incident racially sensitive but being under the constant pressure of interrogation she broke off and was compelled to confess her crime of murdering her two children. From the book “Susan Smith: Victim Or Murderer” By George Rekers we become aware of the different important incidents in her life, her mentality and behavior to others, and the different psychological changes she had in her life.

With these things keeping in our mind, to analyze her character if we consider the conversation between Susan Smith and Professor Halleck who was given the job of evaluation of Susan’s psychological balance, we get some definite proofs of her psychological abnormality.

She told to the professor that she was continuously crying while driving the car, she was very nervous and tensed and moreover her body was shivering.

Initially she decided to suicide and with this intention she took her two children with her as she thought her children couldn’t live without her. Moreover with her strong religious faith she used to believe that her children would find place in the heaven. But actually when the process reached its climax then Susan driven by her instinct came out of the car and thus saved herself. Moreover if we consider her emotions playing a major role in her personal life at that time, we will see that she was in utter frustration regarding her love with Mr.Tom Findlay.

It was a great problem to her to accept the harsh truth that the person whom she loved very much and needed very badly didn’t love her. Consequently a feeling of loneliness was developed in her from this refusal in love and this loneliness disrupted her psychological balance immensely. Keeping the unfortunate incidents and adverse situations of Susan’s life in mind, when Susan’s case is analyzed, we can conclude that she was a patient of DSM –IV Personality Disorders.

The DSM stands for Diagnostic and Statistical Manual of Mental Disorders – Fourth Edition which was developed by American Psychiatric Association (APA). It is vastly used for the treatment of mental disorders. This system actually provides the psychiatrists with a proper theoretical guidance to classify the patient’s problem and thus helping them in treatment of different types of mental disorder. 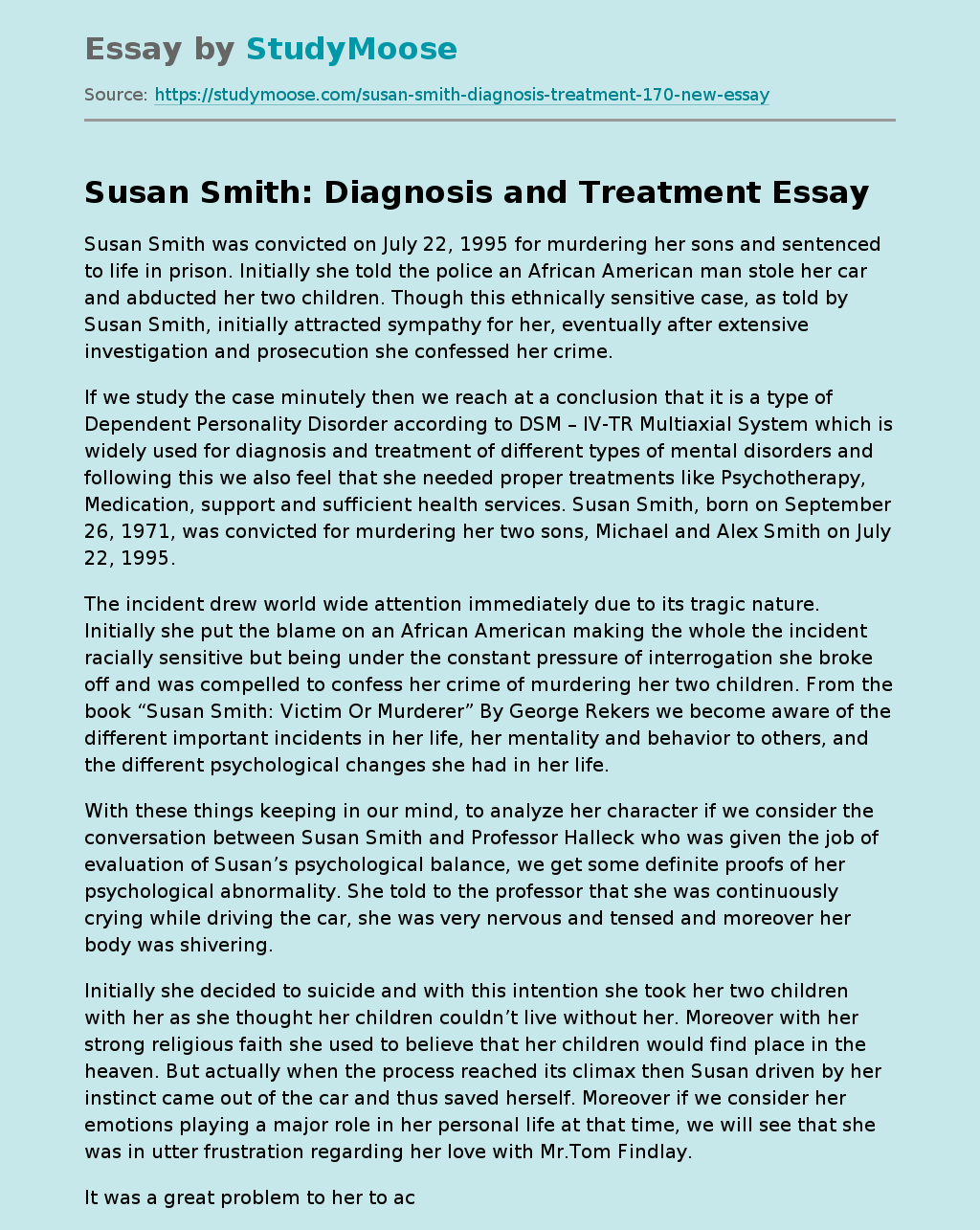