Supernaturalism in Works of Oscar Wilde and R. L. Stevenson

This paper aims to check how the themes of social and cultural issues of the period are portrayed through the aspect of supernaturalism in the selected works of Oscar Wilde and R. L. Stevenson. The term supernaturalism is closely related to Gothic literature. It stands as the most common theme among the works of this genre. The Collins Dictionary defines it as ‘a supernatural agency, the effects of which are felt to be apparent in this world’ (Collins English Dictionary).

Don't use plagiarized sources. Get your custom essay on
“ Supernaturalism in Works of Oscar Wilde and R. L. Stevenson ”
Get custom paper
NEW! smart matching with writer

Although the nineteenth century is marked by the development of modern society as a result of various reforms and the Industrial Revolution, the masses could not let go of the ideas of supernaturalism. Fictions containing themes of supernaturalism appealed to the reading public because they provided an escape from the realities of the harsh world that existed in the immediate outside of their homes. Moreover, the Victorian household itself had tons of problems of their own. Further, the ‘ghost stories offered evidence that the home was no haven from powerful and exacting social pressures’ (Bown 67).

Therefore, the gothic stories provided a respite and escape, even if temporal, from the realities that existed outside of these stories. The people of the period itself were widely fascinated by the subject of the supernatural. It was an ‘important aspect of the Victorians’ intellectual, spiritual, emotional, and imaginative worlds, and took its place in the domestic center of their daily lives’ (Bown 2). As Taine states that any author’s work is largely influenced by ‘three different sources [that] contribute to the production of [his literary work, the] race, environment, and epoch’ (Taine 1).

Therefore, the fictions of the nineteenth century must also be affected by the environment and deal with the issues of the people that lived during the period.

The Happy Prince & The Nightingale and The Rose

First, we shall analyze two of the short stories by Oscar Wilde: The Happy Prince & The Nightingale and The Rose. Both stories include anthropomorphic elements that are crucial to the plot design. The Happy Prince is a tale of a statue of a Happy Prince and a Swallow. Although a non-living being, made of metals, the statue of a Happy Prince comes alive and weeps over the plight of the people of his city. It is ironic how real people’ did not see the problems of these people or even if they did, chose to ignore yet a statue saw and pitied over them. The story revolves around the lives of the former two and their interaction with different characters. Among which, the character of Seamstress is an important one.

The Seamstress and her little boy lived beyond the Ghetto and she was sewing a passionflower for some rich lady, we are introduced to her by the Happy Prince. She was tired and her son was laden with fever, and she could only give him some river water when he asked for oranges (Wilde 6). The Seamstress of Victorian England earned very low and their work was stressful. It was their only socially respectable and acceptable means of earning apart from being a governess. The people outside this industry never knew the amount of stress these people were experiencing and the exploitation in the workplace. Moreover, ‘many “delicate” young women lived, worked, and died, in miserable conditions, and what was worse for Victorian sensibilities, was that some resorted to or succumbed to prostitution’ (‘Slaves of the Needle:’ The Seamstress in the 1840s). The only other option they were left with was to retain her “virtue” and die of hunger.

Although, the characters in the story were relieved of their sufferings through the intervention of a supernatural being, the Happy Prince, rarely, in reality, people thought of the poor. Even if people though and helped the poor, it was not enough. Therefore, through the use of Supernaturalism Wilde points out the miseries of the people and draws the need for helping those who are in need. Also, he asserts the idea that, when we help someone, we only grow warmer in the heart (Wilde 7).

The Nightingale and The Rose, on the other hand, addresses the issue of materialism in the Victorian period through the supernatural agents. The Nightingale without the Young Student’s knowledge, helps him procure a red rose by sacrificing itself. The dedication of The Nightingale was very strong as it was convinced about the affections of the Young Student. Therefore, it did not flinch, even after learning the deadly consequence involved with the process of procuring a red rose. Yet, the value of its sacrifice is disregarded by him and his lady love equally.

The bird here represents Nature, which is taken for granted in pursuit of materialistic gratifications by the people. This was happening in increasing numbers due to revolutions in industrial and scientific sectors within Victorian society. The avaricious nature of people can be seen in the reason the Professor’s daughter gives for refusing the Young Student’s gift. She says, ‘the Chamberlain’s nephew has sent me some real jewels, and everybody knows that jewels cost far more than flowers’ (Wilde 19). While she says this the sacrifice of the Nightingale, that lies dead with a thorn in its heart somewhere among the long grass, is long forgotten from the tale. In the same way, people continued the destruction of Nature uninterrupted and without none to rebuke them, and it was long before eco-critics would voice for nature.

Supernaturalism in Works of Oscar Wilde and R. L. Stevenson. (2020, May 11). Retrieved from https://studymoose.com/supernaturalism-in-works-of-oscar-wilde-and-r-l-stevenson-essay 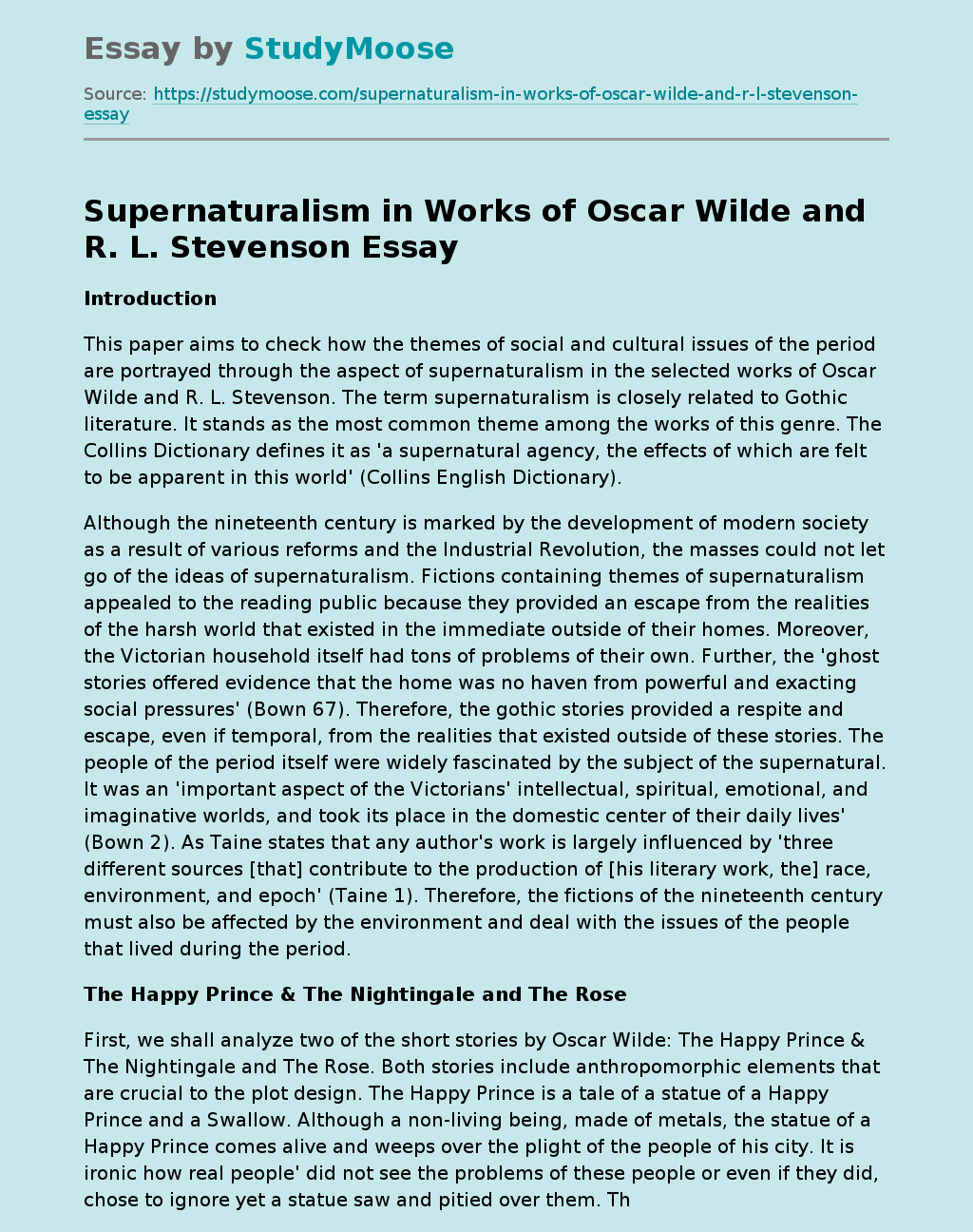