Summary of the Movie The Patriot

A) The Patriot was about a man, a father, named Benjamin Martin whom fought in the American Revolution after it reached his home and family. He did not want to fight at first and did not support the war but his son, Gabriel, was determined to fight in the war as a Patriot and was old enough to do so. He went against his fathers wishes and joined.

B) The battles keep getting closer to Ben’s home and as they can hear the cannons and gun shots in the not so far distance his son Gabriel returns home, wounded and fatigued from fighting.

Turn in your highest-quality paper
Get a qualified writer to help you with
“ Movie The Patriot Summary ”
Get high-quality paper
NEW! AI matching with writer

The battle reaches his front yard and they end up being some sort of a make-do hospital from the wounded that were left. Some Loyalists generals came by the next day and killed all the remaining Patriots and took back their soldiers. Upon finding that Ben Martins son was a Patriot they took him away to be hanged as an example.

Proficient in: The Patriot Movie

Ben’s other son, whom was only 15 but badly wanted to join the patriots as well, tried to save his brother but ended up getting shot and dying. The Loyalists torched Ben’s house and took away Gabriel to be hanged.

C) After the Loyalist took away his oldest son, killed his next, and set his house on fire, Ben Martin decided he needed to take action. He went back and grabbed as many guns as he could carry and an axe.

He took two of his younger sons with him and they went to where they knew the Loyalist would be walking through to go to town. They knew the woods very well and took on the entire fleet of soldiers just the 3 of them. He freed his son and took his family to his sister-in-laws house and went to fight for the Patriot army, now enraged and bitter because of what happened to his family.

D) Ben leads the militia into battle and wins with his knowledge of war from the French and Indian war and his spirit of knowing that he can only protect his family now by fighting for his country. He wins the battle and returns to his family. 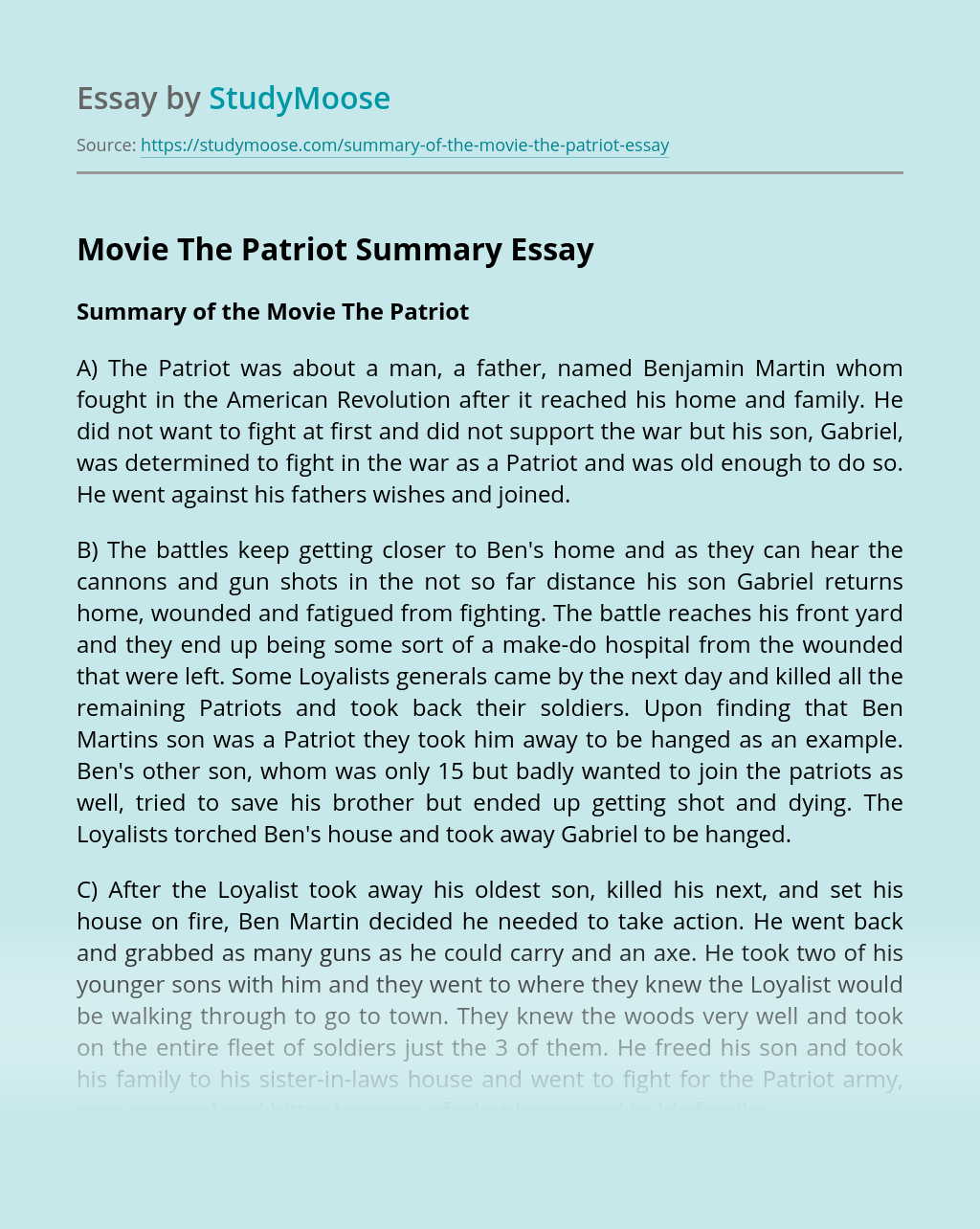 Turn in your highest-quality paper
Get a qualified writer to help you with
“ Movie The Patriot Summary ”
Get high-quality paper
Helping students since 2015
Stay Safe, Stay Original